TheJacksonville Jaguars have struggled to run the football through the first three games of the season, and as Eric Stoner explains, a lot of those issues are from the same reoccurring mistakes.

Let's just jump right into this - I chose to start off with this play because it encompasses three problems that keep re-occurring on Outside Zone runs. That's not to say that all of these goofs are happening on every single run play, but most of the struggles can be pinpointed to one of these issues: not checking out of disadvantageous running plays, getting defeated one-on-one at the point of attack, and missing assignments.

Right off the bat, this play is dead in the water, simply because of the way Oakland's defense has aligned against the offensive formation. The presence of the Overhang Defender (a defender from the second level walked up as the end man of the line of scrimmage, serving as the Force defender against the outside run) requires an adjustment in how the offensive line attacks the front.

Further, the "fan" call takes away the right guard's ability to work up to the middle linebacker, leaving him as an unblocked player right where the run is designed to go. The defense has both an alignment advantage and a numbers advantage at the point of attack. The only feasible way for this play to have a realistic chance of success is for the playside offensive linemen totally washing their men towards the sideline and for the runningback (Todman in this case) to catch the middle linebacker over-pursuing and hitting the cutback lane in the defensive front's weakside bubble.

Instead of working up to the weakside linebacker, Rackley performs an illegal chopblock on the Oakland nose tackle. The WLB has the freedom to squeeze the cutback lane. The playside is clogged due to the numerical advantage and the playside defenders having such extreme outside leverage on the linemen trying to block them. There is no clear point of entry for the runningback, and the play gets stuffed for a yard.

Recognizing the defensive front and checking out of bad plays is important for any offense to be successful. Simply flipping the play and running an Outside Zone to the other side accomplishes a few different things to give this run a better chance at success - the numbers game evens up, with three blockers free to take on three playside defenders. Further, the bubbles in the defensive front are wider and the offensive linemen have better angles can to work their normal reach blocks. The tight end can lead straight up on the weakside linebacker, and the right guard/center have good angles to work a reach combo to the middle linebacker. All of this should lead to clearer points of entry for the runningback as he works his read from end to tackle to cutback.

Gus Bradley mentioned in his postgame presser that the Jaguars start running more "gap" running plays against Seattle. If you remember from the Zone Blocking Basics post, the offensive linemen's rules stay fairly consistent from play-to-play. If an offensive lineman is covered, he tries to reach the defender across from him. If he's uncovered, he double-teams with his playside teammate, with one of them working up to a linebacker. If the defender over his playside teammate is more than a gap away, he's free to work up to the linebacker off the snap. The progression almost always stays the same.

Instead of the passive-aggressive style of Zone runs - where the offensive linemen all try to reach playside, then wash the defender down the line of scrimmage if unable to secure the reach, Gap-blocking uses downblocks at the line of scrimmage with an isolated blocker kicking out the defender at the point of attack. The playside caving everything down combined with the kickout block coming the opposite direction, the holes are more clearly defined for the runningback.

1. Defender aligned in immediate Inside Gap.

3. Down to the next inside defender - usually a double-team that works to a linebacker on the second level. If there is no defensive lineman aligned to either the inside gap or directly over of the offensive lineman, he never reaches playside. Everything works down towards the backside of the defensive front.

There are three main Gap-style running plays: Inside/Outside Trap, Power/Power O, and Counter. The Jaguars have sprinkled some Power O in here and there, but really started leaning on Power O in the second half of the Seahawks game (and had some decent success with it). 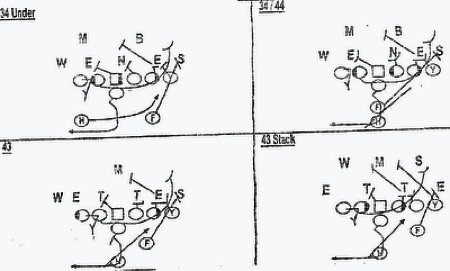 (Power O against different defensive fronts. Note how the rules and progression dictates who the offensive line blocks so there is never confusion - Protect the Inside Gap first; if nobody is aligned in the Inside Gap, block the man directly over; if there is no one inside or over, double-team the next man down and work to the second level. The playside double-teams and downblocks compress the defense and wall off the backside pursuit, and the fullback kicks out the end man on the line of scrimmage to create an alley for the runner.)

(Note how the RG/RT double-team creates a barrier against the backside pursuit.)

In this example, the Jaguars run Power O against an almost identical front the Raiders ran my earlier example (the overhang defender here is off the screen). The offside pulling guard gives the offensive a plus-one situation at the point of attack (six blockers on five defenders). Further, I wanted to show the potential points of entry for the runner to choose from based on what the second-level defenders do (as opposed from reading the success of the reach blocks at the line of scrimmage in Zone runs). The play is designed to hit right inside the fullback's kickout block, but the runner can get downhill and alter his path depending on what the second level defenders do (for an example of MJD cutting it all the way to the backside A gap, check out this GIF). MJD got six yards out of this run, and it probably would have been more had Meester held his block a split-second longer and if Michael Bennett (Seahawks DE #72, identified as "3" in the above GIF) had not taken out three blockers on the play.

So that wraps up the basic differences between Zone and Gap style running plays. The Jaguars will probably continue experimenting with both until they figure out what's going to be the most successful for this year. Anecdotally, it seems like the Power O plays are having decent success, which makes sense as it's been a staple run play for the team for years now. Mike Mularkey's offense was almost exclusively Gap-based, and while the team ran some Zone concepts under Dirk Koetter, it was mostly Inside Zone. It'll be interesting to see if they start incorporating some Trap and Counter plays as the season goes on or if they remain mostly focused on working the kinks out of the Zone scheme.