Is the Jaguars defense fixable?

The Jaguars defense has shockingly been a miss through the first four games of the season, but is it fixable?

Share All sharing options for: Is the Jaguars defense fixable?

The Jacksonville Jaguars defense is approaching pace to be historically bad, not just in franchise history but in NFL history. It was supposed to be one of the improved areas that the team could lean on while a young offense was able to work out the kinks, but reality has been the offense trying to carry the defense.

So what's going wrong? Is everyone just bad? Are people blowing assignments? Is it salvageable?

One of the biggest issues on the defense, and currently what's breaking their back, is the coverage of the back seven. Despite the fact that Philip Rivers threw for 377 yards, I thought the Jaguars defense wasn't actually that bad and overall the coverage was better.

But they still had those back breaking plays.

"I don’t know if the coverage was tighter in the aspect where you didn’t see many guys running free. I just think that we’re not challenging throws," Jaguars head coach Gus Bradley said on Monday. "I think they had forty attempts and one PBU (pass breakup). That’s not how it should be. You should have more pass breakups. It felt like if there was an incompletion Branch got his arm one time, we had tighter coverage, he overthrew it in the end zone but Alan Ball had one in the end zone where he had a knockdown but other than that it might have been a little bit of the rush."

Bradley's correct in that there was really only one true pass breakup, at least according to ESPN's stats. Branch got his arm on a Rivers pass at the line and Alan Ball had a breakup, but other than that passes weren't contested like we were used to seeing even last season. The Jaguars only have nine pass breakups this season, but last season ended with 71 on the year. That puts them on pace for half of last season's total, if they're lucky.

Rivers completed 4-of-7 passes over 20 yards in the air on Sunday for 136 yards and three touchdowns, which accounted for all of San Diego's touchdowns on the day and 36 percent of their passing yards. Only one of those passes were just a great play by the Chargers.

Without trying to sound cliche, guys just aren't doing their job on some plays and on some plays teams are just making the right offense play call. 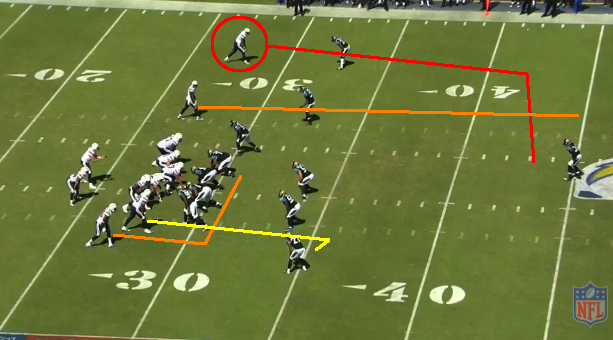 The first real big passing play for San Diego came in the second quarter on a 24-yard strike to Keenan Allen. The Jaguars are in a Cover 3 look with Johnathan Cyprien as the deep safety and the Chargers just have the right playcall. This is a "dagger" concept and is simply just a Cover 3 beater.

Trying to figure out who's fault at coverage here made me lean to Allen Ball not riding inside with Allen on the cut and letting Cyprien pick up the slot receiver down the seam, but talking with former NFL defensive lineman Stephen White, it's just a really tough route combination to pick up in a Cover 3 look. He explained that Ball didn't really do anything incorrect on the play, but you have to hope one of the linebackers drops deep enough in coverage to get in the passing lane and get a hand on the ball, but the route coming under the linebackers is there to keep them more shallow.

On the very next play, it looks like the Chargers catch the Jaguars again with a straight up Cover 3 beater. 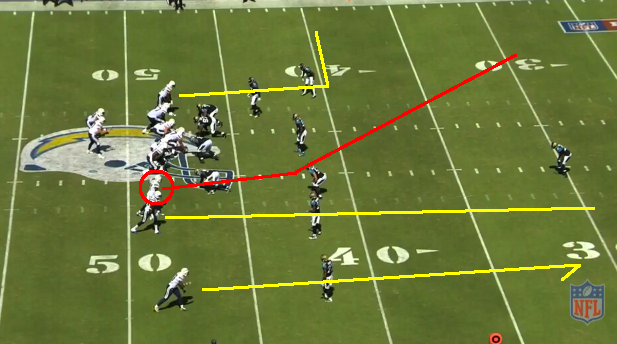 The Chargers stack the right side of the defense, which makes Josh Evans cheat on the hash. Royal runs through the linebackers to the other side of the field, but the issue here is figuring out who should be picking him up on the play. On the left side, Cyprien is covering the flats after getting a slight jam on Antonio Gates and Alan Ball picks him up on zone. On the other side of the field Dwayne Gratz is picking up the deep third and carries the inside receiver while Will Blackmon picks up the comeback route. Evans starts to come inside to help with the seam route, as the receiver is past Gratz, but Royal is running free to plenty of wide open space for the easy touchdown.

There is also a play action fake on this play, Hayes might get caught peeking in the backfield, which is why you see him suddenly turn and run after Royal on the play. Even so, it's a tough play to cover in the Cover 3 look. It's possible you could have Evans line up more centrally than on the hash and he picks up Royal, but you've got three receivers on the side he cheats to and just a tight end on the left.

Stephen White mentions that you hope the corner (Ball) keeps their eyes inside and continues to drop when Gates breaks short to the sideline so they can pickup Royal in the deep third, which still would be a tough cover for the play but at least may have made the throw tougher to make and made Rivers think to go somewhere else.

As I mentioned before, I don't necessarily think the Jaguars defense as a whole had a poor game. They had a few back breaking plays that just looked like straight up Cover 3 beaters, which are going to happen no matter who you have on the field. There were not as many blown coverages as in past weeks, the biggest one being Winston Guy biting on a double move for another easy Royal touchdown, but the missed tackles dropped significantly as well.

The front four got good enough pressure for the team to be successful, sacking Rivers twice, hitting him five times and pressuring him eight times. Even on the two plays above, he's forced to move off his spot.

But you also have to factor in that currently, Philip Rivers might be playing like the best quarterback in the NFL.