Jaguars should reassess how they approach running the football

Share All sharing options for: Jaguars should reassess how they approach running the football

It's no secret that the Jaguars struggle running the football. It's one of the reasons the offense is struggling, even if you acknowledge the fact that the Jaguars are playing essentially with half rookies on their offense as primary contributors, namely the quarterback and wide receivers. 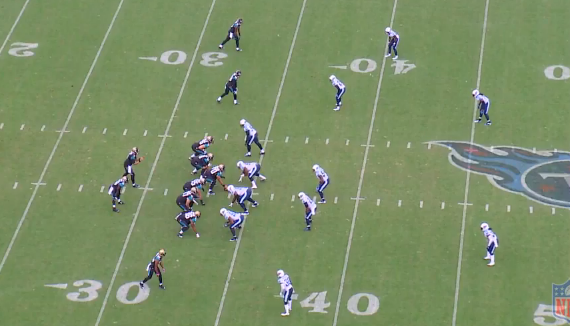 This is an 11 personnel look for the Jaguars offense and it's one they used predominantly against the Titans in the second half, namely in the fourth quarter when Bortles began moving the ball down the field multiple times. While some more traditional NFL fans will scoff at the idea, because the "spread" doesn't work in the NFL, this isn't the spread and your quarterback isn't limited to being in the shot gun.

What this look lets the Jaguars do is run the ball with the types of plays they can actually run it, inside zones and read-option. You're not limited to just being in traditional shotgun either, as the Jaguars often lined up with 11 personnel in the pistol formation or under center. 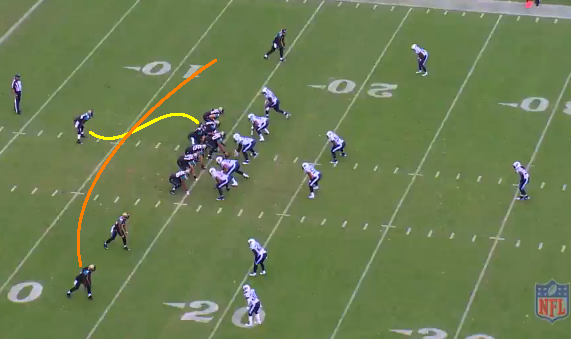 On the above play, the Jaguars run to the inside where Storm Johnson cuts back to the left side and picks up seven yards. Denard Robinson, lined up at wide receiver also comes across on the play (orange line) to decoy a sweep on the play. The Jaguars ran this play or something similar multiple times on the day, which ended up setting up another neat play we saw the Chicago Bears run, but instead the Jaguars used Marqise Lee as the "decoy" on the play, but he ended up halting the sweep across before he got the tackle box and it ended up a variation of a screen pass.

While the above play was out of 21 personnel (2 backs, 1 tight end), it still used the same concepts they were setting up for much of the game running 11 personnel. To my surprise, the Jaguars never actually handed the ball off to the sweep wide receiver, though I'm confident if they had it would have been a chunk of yardage. They set it up all game.

As mentioned before, you're not limited to the shotgun and can run some pistol looks out of the same formation, which gives you the benefit of play action passing, roll outs and simple run plays. 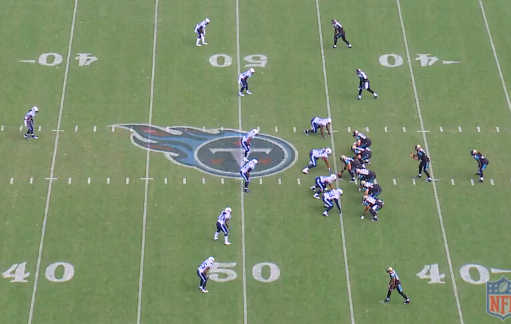 This pistol look in 11 personnel (1 back, 1 tight end) ends up being a play that moves the chains. Bortles snaps the ball, fakes the hand off to Denard Robinson, then comes back and hits him on the delayed screen, picking up 12 yards. Just the same as everything else you can do with a normal screen, but just in a formation that best fits the Jaguars current offensive personnel and more importantly their quarterback's play style.

As mentioned before, the Jaguars went to more 11 and 12 personnel looks in the second half, most notably the fourth quarter and they began to move the ball better. They were also able to run multiple plays and looks in the hurry up because they just stayed 11 personnel for the majority of their drives.

I understand why the Jaguars went more 2X personnel in the first half, as they were giving Storm Johnson a shot to run the football, but it's clear that the Jaguars run the ball better out of 11 and 12 personnel, so you might as well build your offense around that going forward.

TL, DR version: Take the fullback off the field unless you're in a power situation.

Jaguars vs. Browns: Everything you need to know