The Jaguars defense has improved in the last few weeks, but the same breakdowns continue to happen.

If someone were to ask a Jacksonville Jaguars fan how to beat them on defense, they'd tell you to pass the ball over the middle. If they told you that, they'd be right. The Jaguars defense over the past two weeks (really, against San Diego too but...) has looked improved and done what most thought they would in the early part of the season, which is hold teams under 20 points and give the offense a chance to win the game.

The last two weeks, they did just that giving up a combined 27 points to the Pittsburgh Steelers and Tennessee Titans, but they've still given up some big plays that originate from the middle of the field. Some of the plays are simply just Cover 3 beaters, but there is still more the Jaguars can do on the field to limit these plays.

That is, once they get better/faster players at certain positions. 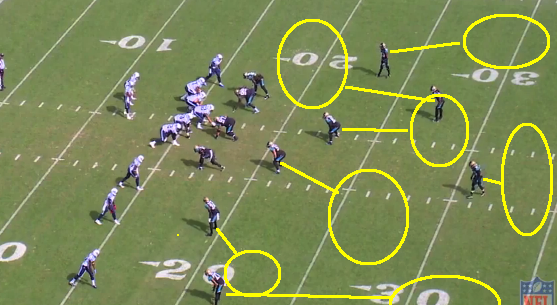 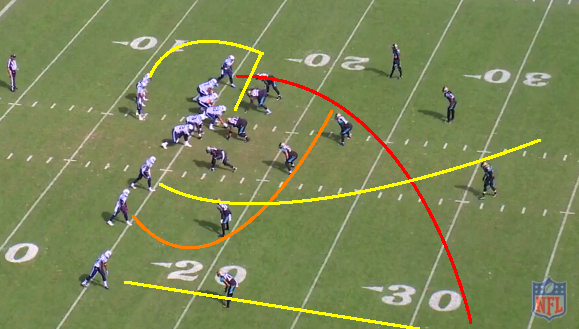 The play above was one of the first of the handful of big plays the Titans hit in the passing game. It was a 38-yard completion to Titans tight end Delanie Walker (who else) and it was because the team knew they could pick on the Jaguars linebackers. My favorite middle linebacker, Paul Posluszny, is one of the victims on this play as the Titans hi-lo him with a short crossing route while Walker comes over the middle of the field behind him.

As you can see in the .gif, when the shorter crossing route begins to make it's way in front of the middle linebacker, he peels off the receiver running the other deep crossing route and is pulled shorter. If the linebacker just stays within his zone and keeps his depth he can pick up Walker coming across the back of his zone and maybe not erase the play altogether, but not make it such an easy wide open throw.

This isn't to lay the blame at Posluszny's feet, but my guess on the coverage is that he should have kept his depth close to the 30-yard line and let the nickel corner or Johnathan Cyprien handle the shorter crossing route. If Titans quarterback Charlie Whitehurst opts to go for either the short routes, they're short gains. The orange crosser is picked up by Cyprien, who's right there to either make a play on the ball or the immediate tackle while Will Blackmon is there to pick up the running back coming across for a short gain, so long as he makes the tackle.

The Jaguars show Cover 3 with the linebackers on the line of scrimmage, likely showing blitz, but on the snap they bail to coverage. The Titans have three receivers on the left side with a stack (one behind the other), which seems to give Posluszny pause on who he's to pick up until he sees Blackmon pick up the shorter route. Poz then seems to just get lost in where he should go, completely turns his back to the quarterback to find Hunter, and Whitehurst lets the ball go while Poz is turned around.

Cyprien actually makes a great break on the play, but just completely misses the tackle and Poz is there to cleanup.

It's little things like that, which are becoming less and less, that has been killing the defense. The Titans only had a handful of "explosive" plays on Sunday, but it seems like nearly all the other team's explosive plays continuously focus on exploiting the middle of the field.

Jaguars vs. Browns: Everything you need to know