Why I'm not as down on the Jaguars rebuilding process

The Jaguars are 4-17 since Dave Caldwell and Gus Bradley took over last season, but I'm not upset.

Share All sharing options for: Why I'm not as down on the Jaguars rebuilding process

I've been trying to think of the best way to put this down in text, but it's not easy. My feelings on the Jacksonville Jaguars building process and despite the fact that they've started 0-5 again and why I'm not overly upset about it. It's tough to put it into words where it makes sense and it doesn't sound as if I'm trying to say everyone else is too dumb to get it or you shouldn't be frustrated.

I can't really think of a similar reconstruction project a franchise has had to go through that compares to the job that was in front of general manager Dave Caldwell. When he took over in 2013 it's almost as if he was taking over an expansion team that didn't have the benefits of extra draft picks and an expansion draft. The best players on the roster were older veterans who had started their decline. 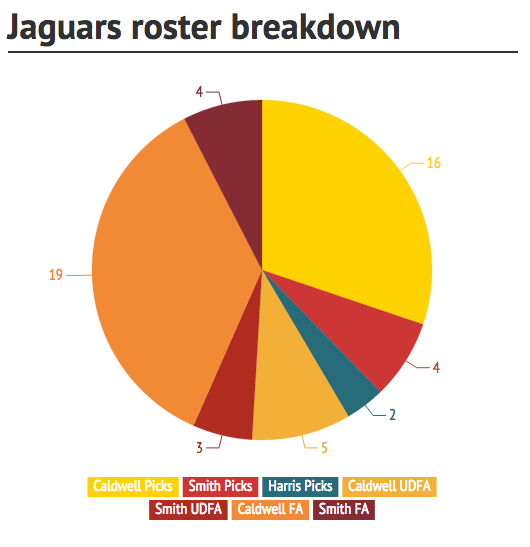 The Jaguars roster currently has 40 players that Dave Caldwell has brought in, be it through the NFL Draft, free agency, trades or whatever. Instantly most people will shift to arguing that Caldwell hasn't done a good job as the general manager, but it's not really that simple. While the vast majority of the roster consists of players that Caldwell has brought in, it also consists of a ton of young players who don't have a lot of NFL experience under their belt and it includes a handful of late round pick starters who are starters simply out of pure necessity. 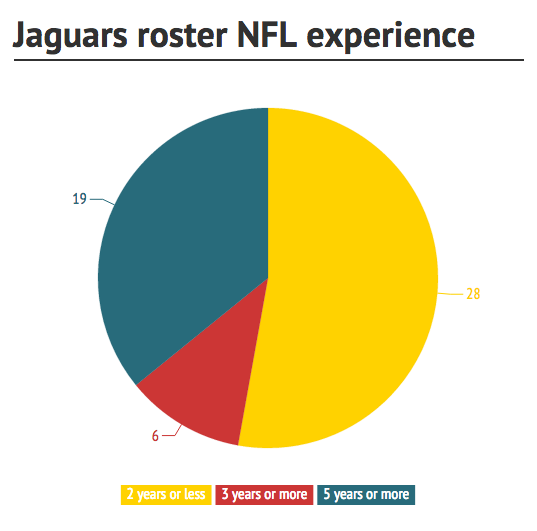 By choice, the Jacksonville Jaguars have an insanely young roster. They're currently not a good football team, partially because of that choice. Instead of trying to sign a bunch of stop-gap starters all over the place, the team signed a handful of "prove it" free agents and older stop gap players, obviously hitting on a building block like Sen'Derrick Marks and so far whiffing on one like Dekoda Watson. The majority of the roster however consists of first or second year NFL players with only 10 of those veterans in the starting lineup on both sides of the ball, combined. 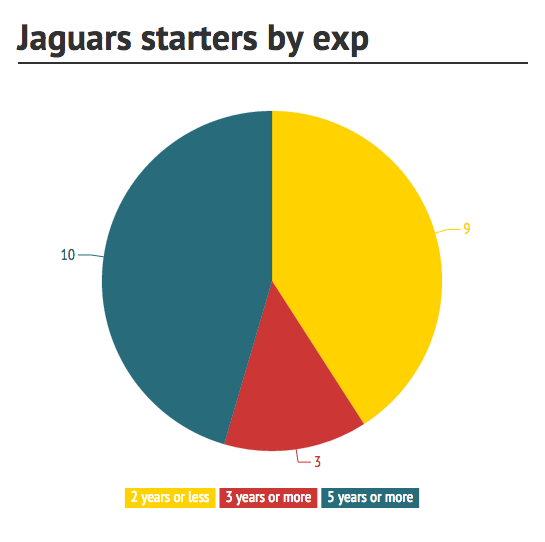 Not only are the starters young players learning on the fly, forced into the lineup but so is the depth. The starters also aren't all top flight rookies, some of them are day two and day three picks in their first and second year thrust into the lineup. Yes, this is forced by the way that Caldwell has decided to build the Jaguars roster from scratch, but you need to consider this when you're placing expectations on the players and what results you're getting on the field. 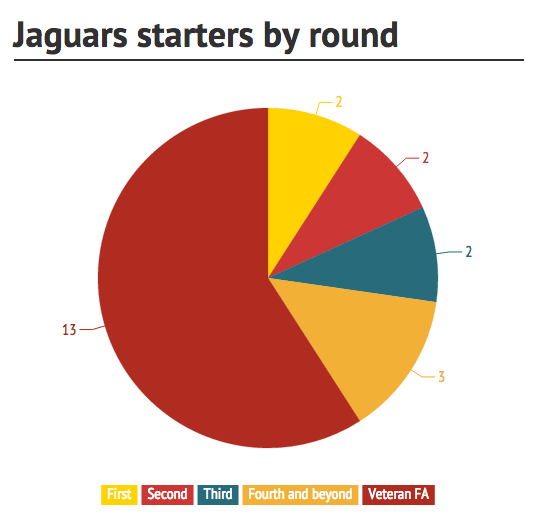 Sure, the Jaguars started last season 0-8 and finished the year 4-12, but in reality the clock on the actual rebuild began with the team's game against the San Diego Chargers two weeks ago when quarterback Blake Bortles made his first start. Since the clock has been set, the team is 0-2 in two competitive football games.

Obviously things need to be better and need to get better and fans deserve to be frustrated. No one should be giving Caldwell or head coach Gus Bradley a free pass, but I think perspective on where this team was at when they took over has been a bit lost because of the built up frustration from seasons past and the failures of previous general managers/head coaches in Shack Harris and Gene Smith, the latter of which really sent the franchise into a death spiral, roster-wise.

Caldwell has had two offseasons and two drafts to work with, and though there are some moves I probably would have done differently, there is only so much you can do so fast to improve a football team. It's clear Caldwell's method has been to build the core of the team through youth and the NFL Draft, with some free agent patchwork. That's going to come with growing pains and right now we're seeing those growing pains.

Over the last two weeks however, the Jaguars have played some of their better football and have been "in the game" until late in the second half, when the lack of depth and youth shines through. Even on Sunday in their 17-9 loss to the Pittsburgh Steelers, the Jaguars were in position to win until their rookie quarterback made a mistake and was picked off for a touchdown with 10 minutes left in the game.

Sure, so far in their tenure Caldwell and Bradley are officially 4-17, which is awful. But, the way I've been viewing how the rebuild is going is that they're now 0-2. They have their guy at quarterback and now it's about letting him grow and putting the pieces behind him. We've already seen the impact he makes on both the offense and by proxy the defense. The offense is going to have a lot of growing pains with seven rookies getting significant playing time and a completely different offensive line that finally settled into place Week 5 with their projected starters, but that's just how it is.

The 2013 Jaguars were for all intents and purposes an expansion franchise with the state of their roster. The goal was always to compete in the 2015 season. Caldwell chose to go young and build up the roster with "his guys".

Maybe I'm just lying to myself or maybe I'm just a fool with hope, but I'm not all that upset with how things have gone so far in the Caldwell/Bradley era. The 0-5 start to the season always looked like a distinct possibility when the schedule was laid out and a 1-4 start was probably best case scenario, though the blowouts weren't expected. The past two weeks of the defense is more what people thought it would be and I think we'll see more of that going forward.

But, being frustrated is ok. Being mad is ok. Questioning what's happening is ok. I just wanted to provide a little bit of visual context to my train of thought and why I'm not currently that upset. I still think the Jaguars end the season with four to six wins, which was my expectation from the get-go.