2nd year player Demetrius McCray has been handed a starting job after his performance Sunday. How well did he really play?

Despite giving up 261 passing yards, the Jaguars secondary had, by far, their best 4 quarter performance in Sunday's loss to the Pittsburgh Steelers. Arguably the brightest spot of a positive defensive effort was 2nd year player, and former 7th round draft pick, Demetrius McCray.

McCray, filling in for the injured Dwayne Gratz, saw starter snaps for the first time since week 3 last year.

In his 1st start of 2014, McCray was tasked largely with covering Antonio Brown, who is widely regarded as one of the upper tier WR's in the NFL. Throughout the game, McCray was targeted 6 times, giving up 3 completions for 32 yards, over half of which came on 1 play.

Throughout the game, Jacksonville mixed up coverages from Man to Man to Zone Coverage pretty frequently, so I will only breakdown McCray's man to man coverage targets.

McCray's first target came on first down with 1:10 left in the 1Q.

The route ran by Brown here is a 15 yard comeback, and Brown is supposed to make McCray sell out to a vertical route.

McCray does a good job to challenge Brown at the LOS, initiating contact and taking away inside leverage early on, minimizing Brown's chance to separate. 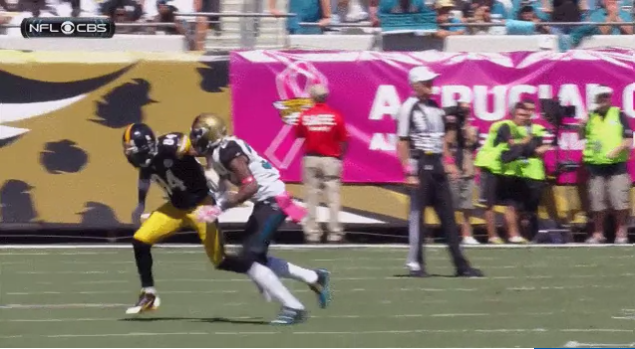 Brown fights through the contact and attempts to continue to sell a vertical route, but eventually gets his head around, signalling to McCray that the ball is coming soon. Reacting to this, McCray closes in on Brown in the route even harder, attempting to make Brown's transition for the ball as difficult as possible. 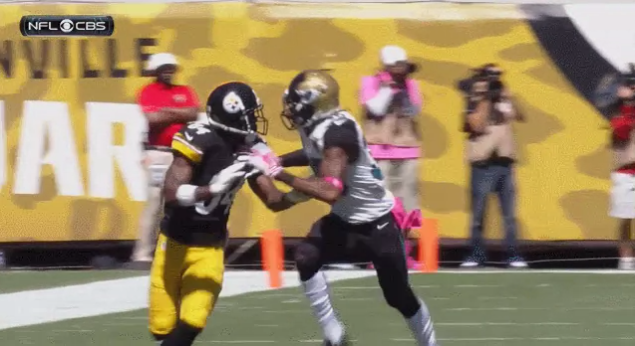 The throw to Brown is poor, but if thrown on target, it would have been a difficult catch to make. McCray made legal contact throughout the route, and did a good job of adjusting to what the WR gave him. All promising signs.

Target #2 came on the following play of his first Coverage target, to the same WR, on the same route concept. The big difference was the result of the play (15 yard completion) which was largely due to; 1) A much better throw 2) McCray playing the route differently

McCray lost on this coverage right off the snap. He does not challenge Brown at the LOS, and is caught flat footed in his transition, which led to him giving up too much space to Brown. As he tries to recover vertically, Brown takes advantage and quickly comes back to the ball.

This was not only McCray's most impressive play of the game, but probably the best play and Jacksonville Corner has made this season (Says more about the Corner play than anything).

McCray lines up on an island in man to man coverage on Brown in the redzone.

Brown was actually the 3rd read by the QB on this play, so it is not like it was a quick hitting route. McCray has to stay with his man throughout a prolonged route.

Early on in this play, it looks like McCray was going to be beat. 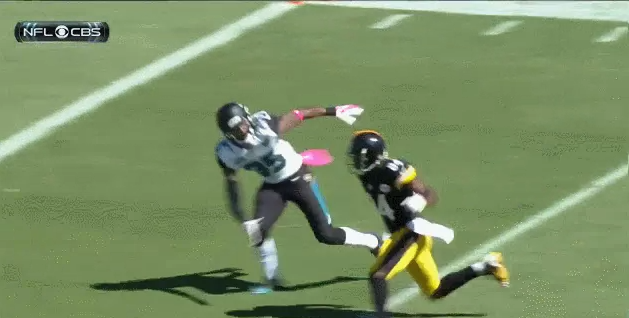 McCray's footwork, like on Target 2, is poor off the LOS, and he loses his balance when Brown attempts to cut inside.

Brown does a good job of using legal contact and his lengthy frame to recover though, and minimise the separation between him and Brown. 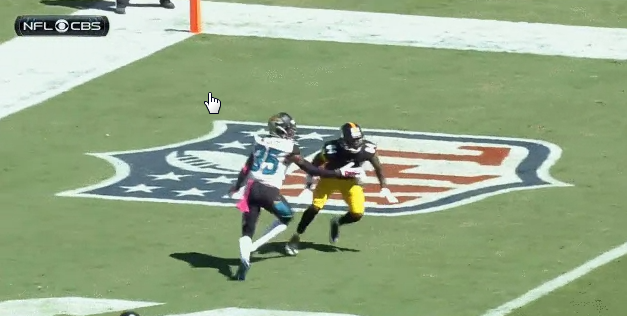 McCray gets too caught up inside Browns frame and again gets caught off balance, this time with his back to the QB, and Brown breaks to the sideline. 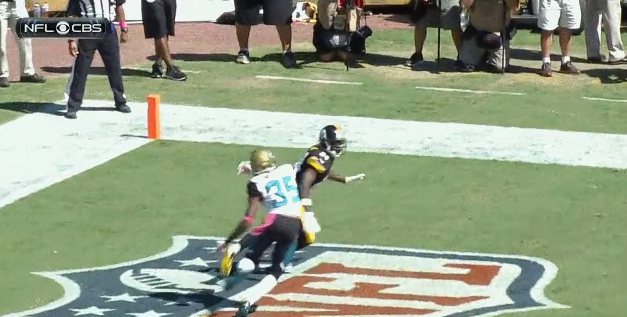 The amount of ground McCray has to make up to defend this pass is pretty big. All the QB has to do is place the ball outside of Brown and it looks like a TD. 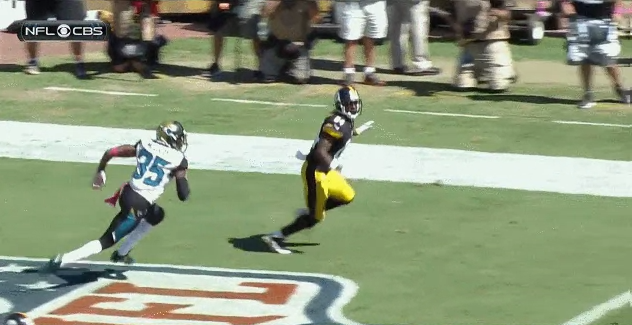 What makes the difference between 6 points and a crucial PBU here is McCray's physical gifts that can't be taught. He uses his agility, long frame, and awareness to meet the ball at with perfect timing to deflect the pass. It is a big time play considering how he was twice beat in the route.

Throughout the game, McCray did a lot of things that Gus Bradley harped on the CB's having to improve on. Breaking on the ball, physicality through contact, just straight up challenging more passes. McCray wasn't perfect, but it was a refreshing performance for a secondary that has looked nothing like many anticipated coming into the year.

McCray is now entrenched as a starter because he simply earned it. It should not be expected to be a season long promotion because the sample size of McCray is so small, but if he strings together several games like the one he played on Sunday, he deserves to remain the starter.

In his 3 career games where he played over 50 snaps McCray, a 2nd year 7th round draft pick from Appalachian State, has faced: A Russell Wilson led passing attack, a Philip Rivers led passing attack, and Antonio Brown. That is a lot to ask of a young DB from a small school. But McCray has played admirably in each game, and if his play on Sunday is any indication of things to come, he could be primed to breakout.