I wish Gregg Williams was never associated with the Jaguars. Wait, there's a whole team of these guys?

Share All sharing options for: Jaguars Hall of Shame

How in the world did Gregg Williams ever coach on the Jaguars?

The recent suggestion that Williams had a stolen Jaguars playbook for the AFC Championship Game after the 1999 season got me wishing he never was associated with this team. It’s an embarrassment. Good thing the Jaguars don’t have many guys that make me feel that way.

The more I thought about it, I realized I could almost make a whole team of players and coaches that I hate to admit were Jaguars. I call it the Jaguars Hall of Shame. If they put this team on Madden, I’d play against them as often as possible and laugh hysterically when I ran up the score.

Some of these guys were bad players. Some were just bad guys. Others just made the team because I couldn’t think of somebody I really disliked at their position. Sorry, guys.

I'm sure you'll let me know who doesn't deserve to be on this team and who I left off. And yes, I know how young Blaine Gabbert is. 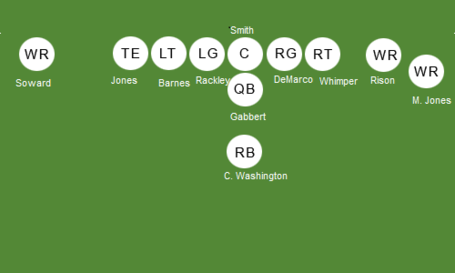 Left Tackle: Kalif Barnes – He wasn’t good enough to play as long as he did.

Center: Jeff Smith – Sorry, Jeff. You are here by default. I liked all the other centers in Jaguars’ history and really can’t remember much about you.

Right Guard: Brian DeMarco – Yeah, I know he started at Right Tackle, but he got moved to guard and he didn’t take it well. And didn’t keep his job.

Quarterback: Blaine Gabbert – Let’s face it. His play has become a punchline and his name is becoming a verb meaning "to play the quarterback position poorly."

Tight End: Damon Jones – I liked Jones, but I had to fill the TE spot. He should’ve been more productive. His "Big Sofa" nickname was unfortunate.

R. Jay Soward – If football was an alcoholic beverage, he would’ve been great.

Running Back: Chauncey Washington – most of our RBs have been good. I know Washington wasn’t with the team long, but he wasn’t a great guy, either. He claimed to be the "stepson" of Suge Knight.

Defensive End: Hugh Douglas – He stole money from the Jaguars with that Free Agent contract and then made jokes about it.

Derrick Harvey – They spent so many draft picks on a player that was so unremarkable on the football field. And in the Dojo.

Defenive Tackle: Kelvin Pritchett – He left the team hating Coughlin and the Jaguars.

Gary Walker – He was a great player for our team when he was here. However, he came from the Oilers and went to the Texans when he left. He was a driving force behind the early Texans / Jaguars intensity.

Linebackers: Bryce Paup – a true free agent dud. The he had the nerve to blame his lack of production on defensive scheme.

Eddie Robinson – He sandwiched his Jaguars years between stints with the Oilers and Titans.

Drayton Florence – He was paid so well to play so badly.

Safety: Reggie Nelson – I’ll never forget him slaping at Reggie Wayne as he ran toward the end zone.

Punter: Matt Turk – You know it’s bad when you edge out a 5th round draft pick punter who never made the team or a punter that got drafted in the 3rd round. He’s the only Jaguars player I can remember actively taunting the crowd

Kicker: Hayden Epstein – The Jaguars spent a draft pick on him and he wasn’t any good.

The tarps – the worst thing about the last 10 years as a Jaguars fan. Mr. Khan, tear down these tarps.