When looking for a quarterback in the NFL draft, can we look to Cincinnati Bengals quarterback Andy Dalton as a threshold for quarterbacks?

Share All sharing options for: The 'Andy Dalton Line'

Most of the arguments against the notion revolve around the fact that there doesn't appear to be a "consensus" top quarterback and/or there isn't an elite prospect. There is "no Andrew Luck" in the 2014 NFL Draft, if you will. 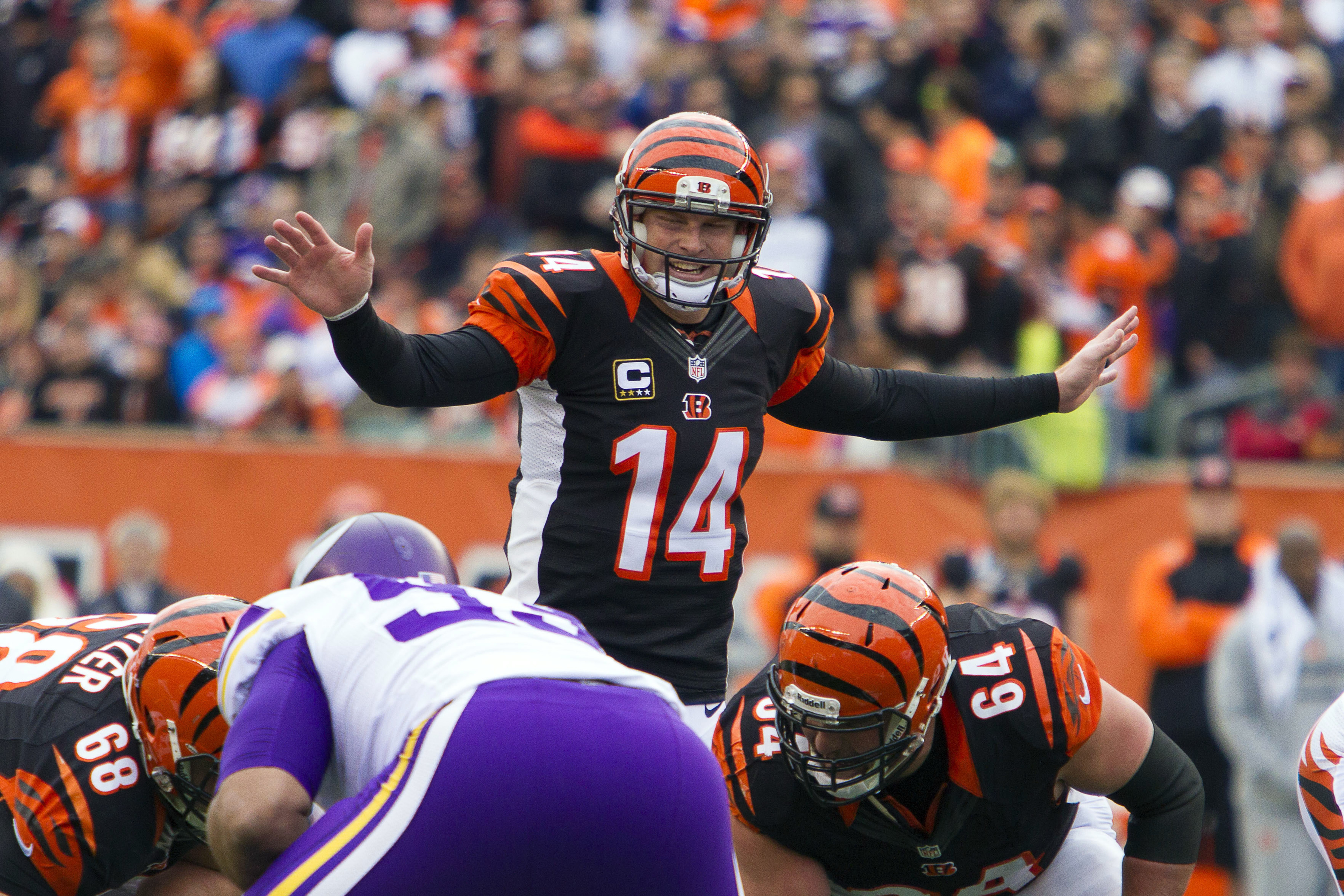 I would agree, there isn't, but should that be the requirement for drafting a quarterback in the Top 5?

While every team would love to get that "Andrew Luck" type of quarterback, the fact of the matter is they're not available very often. Instead, you're left with players who have flaws and teams look for the quarterbacks who not only fit the style of play they want, but the ones with the most limited and fixable flaws.

The question really is, what's the threshold you're trying to meet at worst, with the quarterback you draft.

I posed this question on Twitter the other day, but would you draft Cincinnati Bengals quarterback Andy Dalton with the No. 3 overall pick if he were in the 2014 NFL Draft and you knew everything you knew about him up to this point? The answers weren't all that surprising, with the vast majority signaling they would not but would consider him in the latter part of the first round.

I don't think I would, but I would definitely consider it. Andy Dalton isn't and likely won't ever be an elite quarterback in the NFL. He isn't and probably won't be a bad one, either. Dalton's major problem is that he's good enough to get you to the playoffs, but when the situation and play is amped up, he hasn't been able to get the job done. There's no question Dalton is a limited quarterback, but he's still good enough to pilot a team to the NFL playoffs.

On the flip side, would you draft Russell Wilson with the No. 3 overall pick if he were in the 2014 NFL Draft and we know everything we currently know? I would without even thinking about it, though many would consider Wilson outside of that "elite" echelon of quarterbacks currently in the NFL. The responses to that same question on Twitter netted mixed results, but the majority indicated with hindsight they'd take Wilson with a Top 10 pick.

The recent changes to the NFL CBA has made drafting a quarterback less of a financial risk and more of a way to manipulate the salary cap.

Can you find a QB outside round 1?

Each year legions of fans yell "wait!" on drafting a quarterback in the first round, but how hard is it to find one? It's apparently very difficult to do so.

QB financial risk significantly less Can you find a QB outside round 1?

Like Dalton, Wilson may never be an "elite" level quarterback. He's not going to chuck the ball around 40 times a game and throw for 5,000 yards on a season probably ever. But, Wilson is good enough to do what needs to be done to win a football game and can provide explosive plays be it down the field passing the ball or with his scrambling ability. I struggle to label Wilson the dreaded "game manager" title, but I think he's between that elite and game manager echelon.

The next question I posed on Twitter was asking if people felt that Atlanta Falcons quarterback Matt Ryan was a Top 5 quarterback in the NFL and if he was worth the No. 3 overall selection in the 2008 NFL Draft. The vast majority of the answers I receiver were "no" and "yes" respectively with a handful of double "no"'s. Personally I would say "no" and "yes" to the same question, even though Ryan is just 1-4 in the NFL playoffs in his career. Ryan also recently signed a five-year, $103 million deal with $42 million guaranteed, of which I probably would not have given him despite thinking he was worth the No. 3 overall pick.

So what exactly am I getting at here?

Discussing whether or not Teddy Bridgewater, Johnny Manziel or Blake Bortles are worth the No. 3 overall pick with multiple people who's evaluation opinions I trust, we felt that if you believe a quarterback is going to be at worst what Andy Dalton and/or the current version of Alex Smith (w/Jim Harbaugh and Andy Reid), you should draft the quarterback with the No. 3 overall pick.

For instance, some have compared Teddy Bridgewater to Alex Smith. This immediately causes people to freak out and think he's not going to be any good, but what that comparison is is to Alex Smith the draft prospect, not Alex Smith the NFL player. I don't necessarily agree with the comparison (I see more athletic Matt Ryan), but if that's what Bridgewater ends up being at worst, is he worth the No. 3 overall pick?

Essentially what it means is that personally, if I felt a quarterback would be better than Andy Dalton and that Dalton is his proverbial floor, then I would definitely draft him in the Top 10 of the NFL Draft.

To compete in the NFL currently, you need at least a quarterback who ranks in the Top 12 at their position. I would say Russell Wilson and Matt Ryan meet that criteria while Andy Dalton is stuck in the jumble of quarterbacks outside of the Top 12.

If I pick a quarterback in the Top 10 of the NFL Draft of course I want him to be elite, but more so I need to consider his floor than his upside. I need a quarterback who can consistently get me to and win in the playoffs. He doesn't necessarily have to take the game over every time, but he needs the ability to do so if I need it (see; Russell Wilson).

If the quarterback does not meet this threshold, than they're more than likely a second round pick or beyond, like Andy Dalton was.