Maurice Jones-Drew and knowing when to let things go

Maurice Jones-Drew's time with the Jacksonville Jaguars is likely over, but Pocket Hercules' overall impact with the franchise and fan base is going to end in an unceremonious whimper.

Share All sharing options for: Maurice Jones-Drew and knowing when to let things go

This was the first thing I said when watching 5'7" then-rookie Maurice Jones-Drew take a handoff in Jaguars training camp in 2006. He made a quick stutter step coming through the line and froze Mike Peterson in his tracks, making him fall down when he attempted to make chase.

Peterson was one of the baddest dudes on the Jacksonville Jaguars defense entering the 2006 season, coming off three stellar seasons as the team's middle linebacker and captain of the defense. This little second-round running back, who was billed mostly as a kick returner and third down back, made the 2005 second-team All-Pro linebacker look silly.

It was the first day of pads in training camp and mostly meaningless, but that is always the first thing I think of when I talk about Jones-Drew. His ability to make people look silly in his career with the ball in and out of his hands was only matched by the man he followed in Fred Taylor.

With Jones-Drew on the field, this phrase was becoming routine. He made me do it again with a run from scrimmage immediately following a 70-yard Fred Taylor run. Jones-Drew took the ball off tackle, got into the second level and literally stopped his momentum to fling a safety off his back like a slingshot and then continued on to the endzone for a score. It was just the start of Jones-Drew and Taylor destroying the Indianapolis Colts to the tune of 375 rushing yards and a score of 44-17.

Jones-Drew finished with 941 rushing yards that season, including 15 total touchdowns as the Jaguars nearly had two 1,000 yard rushers for the first time in their history. It was also the season Jones-Drew made it clear he was taking the torch from long time stalwart Fred Taylor. 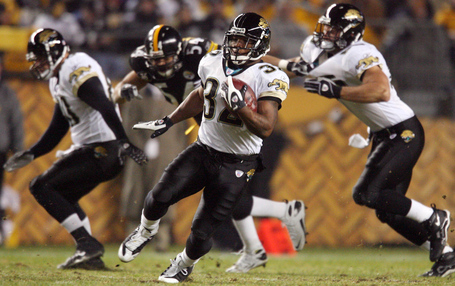 Is what the entire room yelled when Maurice Jones-Drew took the kickoff 96 yards to the one-yard line after the Pittsburgh Steelers initial score in the 2007 Wild Card playoff matchup. It setup a Fred Taylor touchdown run to tie the game. A few drives later, Jones-Drew took a short pass from David Garrard 43-yards for a touchdown to put the Jaguars up 21-7 over the Steelers, a game the team would eventually win. Jones-Drew only touched the ball a total of 10 times in the game, but he was directly responsible for at least 14 points in the win.

He was an explosive threat on the Jaguars offense with the ball in his hands, something the team hadn't had since when Fred Taylor was in his hay-day.

The second time I blurted this phrase out uncontrollably with Jones-Drew was in his second season in the NFL. He completely destroyed an unsuspecting Shawne Merriman with a block, de-cleating him and putting him on his butt, setting David Garrard up for completing the easy pass to a wide open Marcedes Lewis in the endzone to take a 24-10 lead against the Chargers in 2007.

Merriman was coming of a 10 sack season as a rookie and finished with 17 sacks in 2006. He was one of the best pass rushing outside linebackers at the time, but the 6'4" 270 pound man was crushed and put to the ground by someone nearly a full foot shorter and 60 pounds lighter. Jones-Drew was a giant killer. 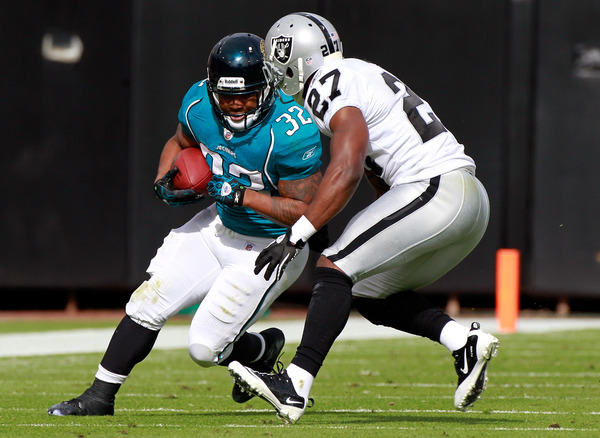 Is what I said under my breath when I watched Jones-Drew go to the ground against the Oakland Raiders on October 21, 2012 on the first offensive play of the game. He was taken down awkwardly by Raiders defensive lineman Tommy Kelly, but stayed in for one more play that ended up being called back for holding. Jones-Drew never entered the game after that play and in fact wasn't even active for another game the rest of the season.

He'd suffered the dreaded lis franc foot injury and waited to have surgery on it, which eventually ended his season and for all intents and purposes, his tenure with the Jacksonville Jaguars.

Sure, Jones-Drew played during the 2013 season but he was a shell of himself and had the worst season of his career. It didn't help that the Jaguars quarterback position was in flux, they lost both start offensive tackle mid-way through the season and the interior offensive line was a disaster. But, in the final year of the five-year, $31 million deal he signed in 2009, it appeared all he had to offer the Jaguars was gone.

It's not likely the Jaguars re-sign the 28 year old running back this offseason, as he's amassed 2,233 total touches, 13,131 total yards and 82 total touchdowns in his eight year career. He's simply not the rolling ball of butcher knives from the 2005 through 2010 seasons. Even in 2011 when he led the NFL in rushing with 1,606 yards, coming off a torn MCL the previous year, you could tell the tread was wearing thin and time was running out.

Jones-Drew clearly saw that too, which is why he held out after the 2011 season trying to get a new contract and his last big pay day.

But that's when you realize once again the NFL is a cold and heartless business.

And then you realize it's the right move by the Jaguars to not give Jones-Drew a new contract, at least the type of contract he's probably looking for.

Then you realize that it's time to let go and move on.

It's unfortunate Jones-Drew's career with the Jacksonville Jaguars is likely going to end with such a thud, finishing the final year of his contract rushing under four yards per carry and rushing for over 100 yards just a single time. He was an important member of the Jaguars during some of the franchise's worst years.

For lack of a better term, he was Jaguars fans superman, as he hilariously showed under his pads in the preseason as a rookie when he scored one of his insane touchdowns. It's hard for fans to let go.

It was hard for fans to let go of Fred Taylor when his time was clearly over.

It seems even harder for fans to let go of Jones-Drew, as he seemed more endeared to fans. He was a workhorse who didn't get injured. He was a playmaker who routinely found the endzone. He was a difference maker on the field during a time when the Jaguars didn't have any difference makers.

You can't fault the Jaguars for how they're approaching it, however. At it's hard, the NFL is a business that uses players and grinds them up until they can't use them anymore or until the cost of using them outweighs what they have to offer on the field.

Jones-Drew has spent eight seasons with the Jaguars. In that span the Jaguars as a team have gone 50-78, including winning just 11 games over the course of the past three seasons and only a single winning season in that span. The fact that he was a star on the national stage during that time just speaks volumes to his ability.

Unfortunately, Jones-Drew's career in Jacksonville is likely going to end in a whimper and he'll hope to land with a playoff bound team as a role player.

You have to know when to let go.