If the Jaguars decide to draft a running back on Day 3, I could envision Baylor RB Lache Seastrunk as an option, due to his high octane running ability. But how does he translate?

Lache Seastrunk comes from one of college football's most high-powered offenses, and he fit it to a T. He is one of the most, if not the most, explosive and athletic running backs in the entire draft class. His acceleration, short area quickness, and long speed are all well above average, and could even be considered upper-tier. He is a touchdown waiting to happen every time he touches the ball.

To go with his insane athleticism, Seastrunk also runs with good aggression and balance. He does not break many tackles, but he never stops moving his feet on contact, which can be built on. When running near the sidelines (which is often) he shows amazing balance and coordination to stay upright and inbounds.

Where Lache Seastrunk Needs To Improve

To put it frankly, his vision and patience are borderline horrid at times. For all the physical tools he has, he is simply too inconsistent t take advantage of them. If the hole is not there he bounces runs outside almost immediately, and is too much of an East-West runner both behind the line of scrimmage, but in space as well. He needs to be more disciplined in between the tackles and learn to just take what the D gives him and go downhill. This screenshot below was against Kansas on a first down late in the game. Instead of taking the one-yard gain, he runs behind the eight-yard line. The line of scrimmage is on the 20-yard line. 12 yards away. He ran 12 yards behind the line of scrimmage. This will not work vs NFL defenses, who will make him pay for it much more than Kansas did. 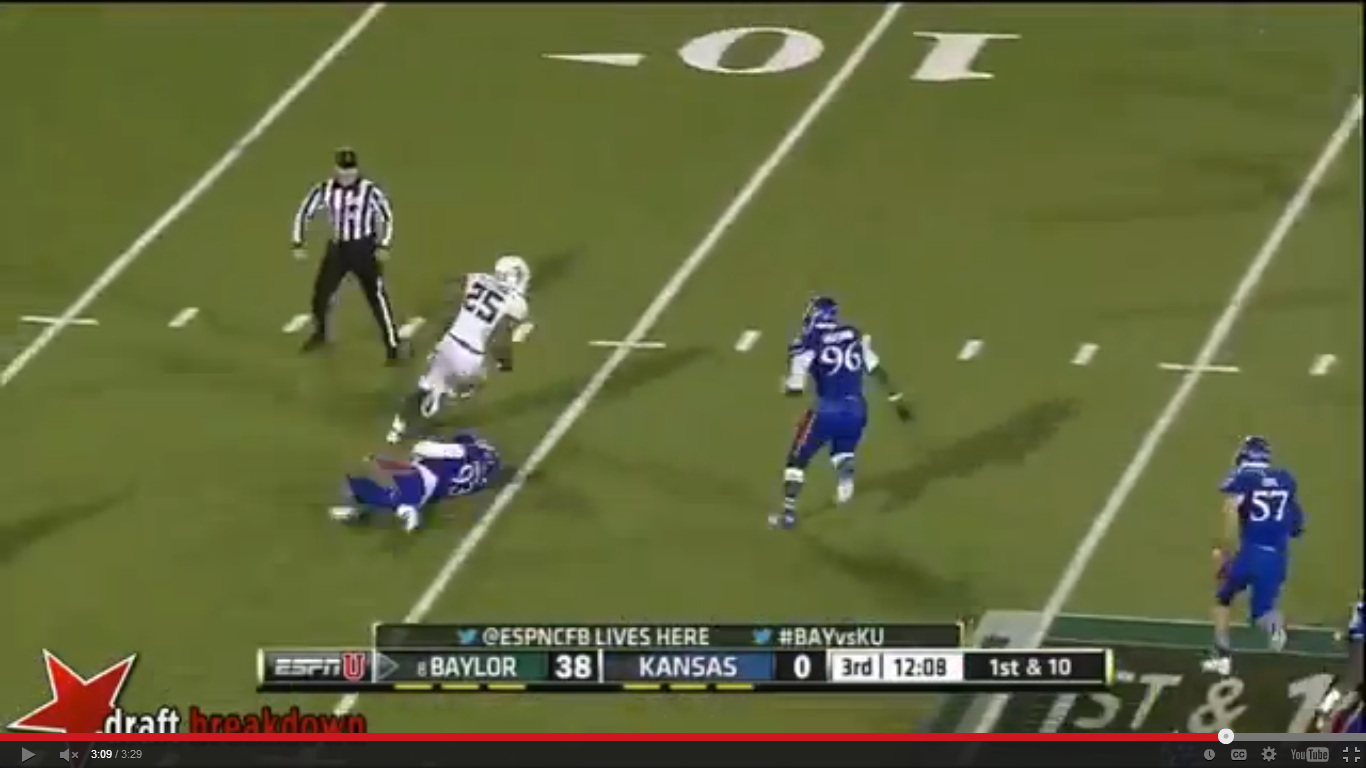 Seastrunk will need to add a good bit of strength as well, as he rarely broke contact at the second level or line of scrimmage, frequently being brought down by arm tackles. It is also a question if he can even play on third down, as he was not featured as a receiving threat and looked inferior in terms of technique, effort, and execution in pass protection.

While Lache has all the physical tools you could want in a running back, he is far too inconsistent as a runner to be relied on as much more than a change of pace back to give 10 carriers or so a game.  He reminds me a lot of Chris Johnson, who had blazing speed but could go for 100 yards one week and 10 the next.