The Jaguars coached Colorado State tight end Crockett Gilmore at the Senior Bowl, after personally requesting for him to be added to the team, showing they may have interest. But is there substance to the sleeper tight end?

Gilmore, an oversized tight end who more resembles an offensive tackle at times, first and foremost dominates as a blocker, both in terms of effort and execution. He has the anchor to be used as a sixth offensive lineman in pass protection, and shows explosion and aggression off the ball, leading to a good number of "pancake" blocks in 2013. He has the strength to move defenders off the line and clearly takes joy in doing so, as he never stops attacking. He is fluid and controlled enough to be an effective blocker at the second level as well as the line of scrimmage.

As a receiving threat, Gilmore is not overly explosive off the line, but he shows the long speed to deceptively get behind linebackers to the second level. He shows the ability to be a chain mover, with soft hands and can bring in contested catches, as he shows toughness and the ability to box defenders out. He is very natural and balanced when catching the ball, and shows strength and balance in his yards after the catch. 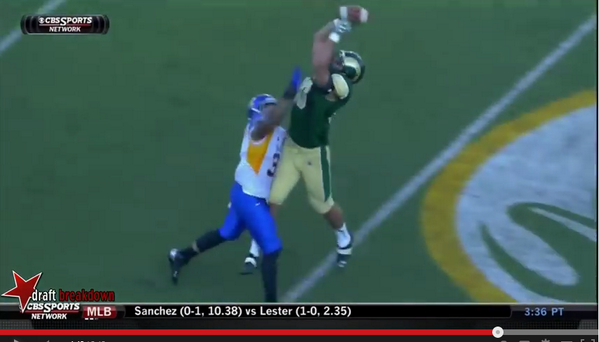 Where Crockett Gilmore Needs To Improve

Gilmore struggles to get quick separation as he is not explosive in his release. Too many times you will see him false step off the line and raise his pad level. He also does not do a good job of sinking his hips and exploding in his breaks on breaking routes, but this is common with taller players. Gilmore also had a few focus drops, despite being a very natural receiver. He needs to do a better job of securing the football before getting upfield.

Gilmore was one of the more pleasant surprises for me this draft season. He shows the ability to be a good blocker at the line of scrimmage, in space, and as a pass protector. He can also win in the red zone and be a chain mover. He will not make you say "Wow!" as a dynamic threat, but he will be a contributor wherever he goes.