South Carolina defensive end, Jadeveon Clowney, a player who many consider the top prospect in the upcoming 2014 NFL Draft, impressed scouts and executives at Williams-Brice Stadium on Wednesday morning. The majority of the Jaguars' brass was in attendance including general manager Dave Caldwell and head coach Gus Bradley.

After observing both the 2013 and 2014 Pro Days for draft eligible South Carolina Gamecocks, I can tell you that there was little comparison between the amount of coaches and scouts in attendance this year and last. And the reason is simple:

The near 6'6" 266 pound defensive end with a 83" wingspan looked as fluid as ever going through on-field drills this morning in front of executives, coaches, and scouts from all corners of the league.

Clowney went through a completely unscripted workout designed to show off the end's improved conditioning skills and movement ability in space. The workout consisted of broad jumping over bags, scooping up tennis balls, bending in circles around a giant hula hoop, and other rapid fire movement drills with little rest in between to demonstrate Clowney's conditioning.

Clowney showed few signs of fatigue and demonstrated the excellent hip twitch and movement skills that teams covet at the outside linebacker position in the 3-4 defense - something that he did not show off at the NFL Combine as he did not compete in positional drills.

Clowney also did not participate in the 40-yard dash or bench press this morning, both of which he did at the combine.

While the true measure of a prospect is found on film, Clowney's workout solidified him as one of the top prospects in the draft and most athletically gifted defensive ends in recent memory.

While his best fit is likely as a right defensive end in a 4-3 scheme where the he spent the majority of his time in college (or at the LEO position for a team like the Jaguars), I have no doubt Clowney has the athleticism that would allow a 3-4 team to plug him in at outside linebacker as well.

At South Carolina Clowney was rarely called on to play in space - though he did on some occasions standing up in the A and B gaps mostly in 2012 when defensive coordinator Lorenzo Ward went through a phase and implemented a package that had him standing up and roaming around on some plays. This allowed Clowney to rush the passer from different angles against potentially more favorable matchups. This was largely abandoned when Clowney proved to be far more effective playing as a true defensive end with his hand in the ground out wide at the 6, 7, or 8 technique.

At pick number 3, I have a hard time believing that Clowney will be available to the Jaguars. However, he undoubtedly enjoys Gus Bradley and defensive line coach Todd Wash. Clowney said as much in a recent article on NFL.com.

Before he began positional drills this morning, I observed Clowney deliberately seek out both Wash and Bradley from the crowd and exchange words and laughter with the two Jaguars coaches for at least 5 minutes. It's worth noting that I did not see Clowney do this with any other coaches (although he was hidden behind scouts and other bodies for much of the workout).

With Gus Bradley's defensive expertise in player development and the Jaguars glaring need for a young LEO, I would be very surprised if Clowney wasn't the pick were he available at number 3.

Quarles is a player that I am on record for being very high on and I clocked his 40s at right around or above the 5.0 mark. Quarles was effective as an interior pass rusher during his time at South Carolina and is a player I project as a 3-technique at the next level.

Quarles was playing out of position for much of the 2013 season at the run stuffing 1-technique due to the fact that he was easily South Carolina's best interior run defender on a defense that was gashed early in the year up the gut. However, I would be surprised if he ended up a Jaguar with the re-signing of Sen'Derrick Marks and recent FA acquisition of Ziggy Hood from Pittsburgh slotted in at the 3-tech spot.

Ellington was a dual sport athlete at South Carolina (basketball and football) who has been shooting up draft boards after posting outstanding numbers at the NFL Combine in February (4.38 forty and 38" vertical jump). He was key to South Carolina's Capital One Bowl victory over Wisconsin and a steady target for Connor Shaw over the past two seasons. He performed well today running routes for Shaw, catching just about everything thrown his way.

Shaw, the winningest QB in South Carolina history and a player that has been rumored to be linked to the Jaguars according to Ryan O'halloran of the Florida Times Union had by my account a disappointing performance. Granted, apart from Ellington he was throwing to undraftable wideouts and even defensive backs, but he missed multiple throws early on and struggled with ball placement and deep ball velocity at times. His first deep throw to Ellington was left way short, which is generally a no-no when it comes to throwing workouts at a pro day.

While I was hoping for a better performance, Shaw has come a long way as a passer and should be drafted in May somewhere between the 4th and 7th rounds assuming his lackluster performance today didn't totally obliterate his stock. 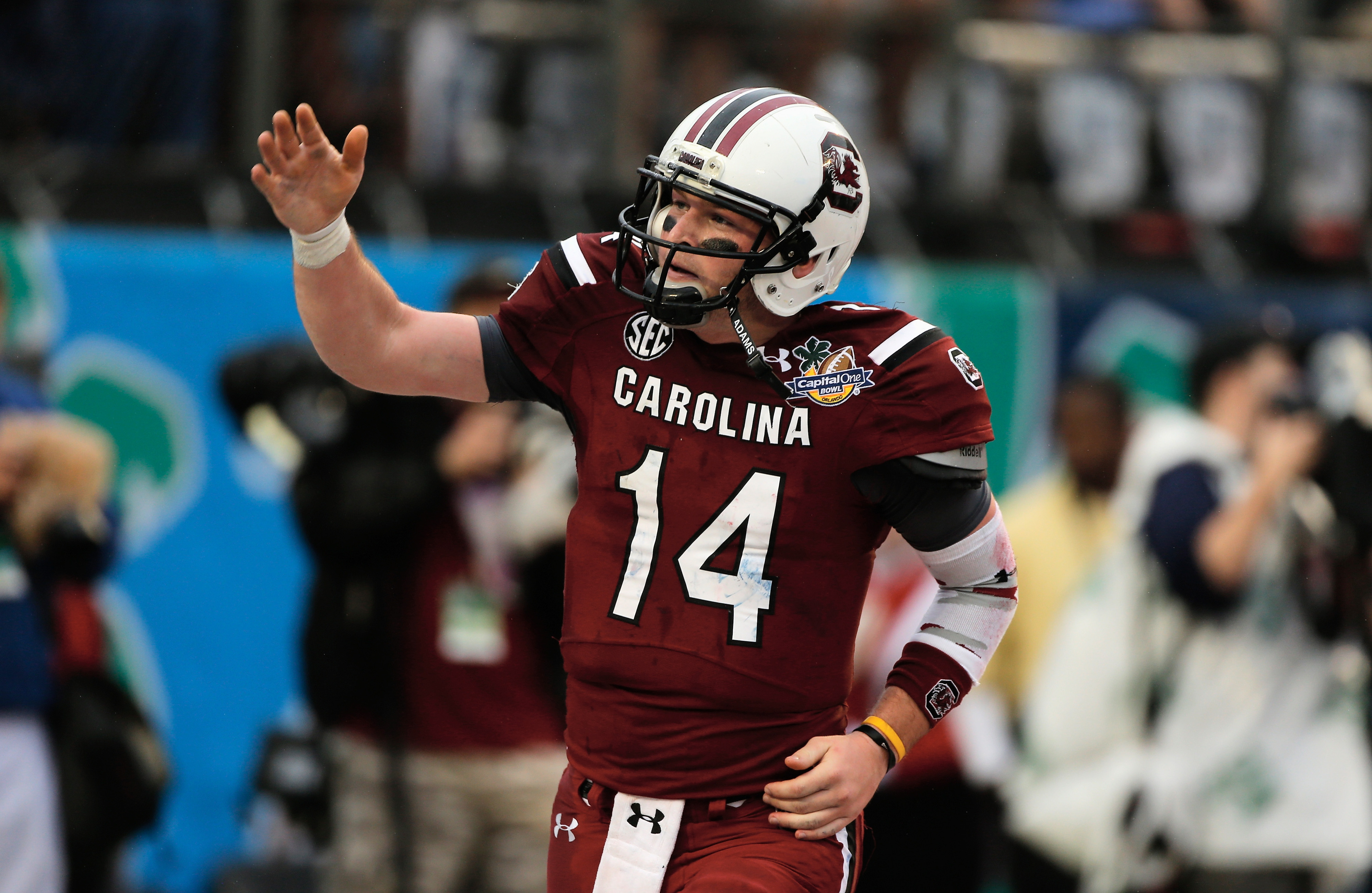 Cornerback, Victor Hampton was a player who needed to make amends to his poor combine 40 time today and did just that. Speaking with him after the workout Hampton told me he was informed his time was "about 4.5", a huge improvement from the astonishingly slow 4.69 number he ran at the combine.

Hampton projects as a nickel corner at the next level and could come off the board as early as the second or third round. In my eyes, his play draws comparisons to Adam "Pacman" Jones.

Both Ellington and Quarles informed me directly that they had spoken with Jaguars representatives today.

One final interesting tidbit I observed occurred shortly before Clowney's on-field workouts. South Carolina head coach Steve Spurrier got the attention of sophomore running back Mike Davis (who many project is one of the top available backs in the 2015 NFL Draft), and deliberately walked him over and introduced him to Dave Caldwell, Gus Bradley, Tony Khan and Jedd Fisch. Davis had what appeared to be a lengthy conversation with the Jaguars' crew.

While it's ridiculously early to speculate what it could mean for the future as it was probably nothing more than a meet and greet, it was interesting to me because Spurrier didn't do that with Davis or any other current Gamecock to any other NFL team. Either way, it could be something to remember one day down the road when Davis becomes draft eligible.

Today's events concluded the significant circuit of pro days as it pertains to the most-often-mocked players to the Jaguars at number three with Clowney, Khalil Mack, and the big three QBs (Bridgewater, Bortles, and Manziel) now done.

Just a over month out from the draft, it's anyone's guess what the Jaguars will do with the number three pick. But with the QB-to-Jacksonville train seemingly losing steam every day, Clowney seems like a solid bet if the Texans and Rams decide to pass.