Jaguars should draft Logan Thomas, if they're waiting at QB

If the Jacksonville Jaguars are going to wait around to pick a quarterback, they should take the player with the most physical tools in the draft in Logan Thomas.

Share All sharing options for: Jaguars should draft Logan Thomas, if they're waiting at QB

The general feeling heading into the 2014 NFL Draft is that the Jacksonville Jaguars will pass on selecting a quarterback with the No. 3 overall pick in May. Regardless on who the team picks third overall, this has led to a rush of opinion on who the team should pick at quarterback in the second or third round of the draft.

The standard slew of suggestions are Zach Mettenberger, Jimmy Garoppolo, A.J. McCarron, David Fales and Aaron Murray. There's one player generally left out of these discussions, presumably because his upside is completely ignored, and that's Virginia Tech quarterback Logan Thomas.

Re-watching a lot of the quarterbacks in the second tier to get myself more familiar with them I kept coming back and watching Thomas over and over, because he's arguably the most interesting quarterback in the entire draft.

Most of you are laughing right now, because on paper Logan Thomas looks awful. On film at times he absolutely looks awful too, making plenty of throws that make you laugh and say "What are you doing?!". On the flip side he'll also make quite a few throws that make open your eyes wide and say "Oh, wow." 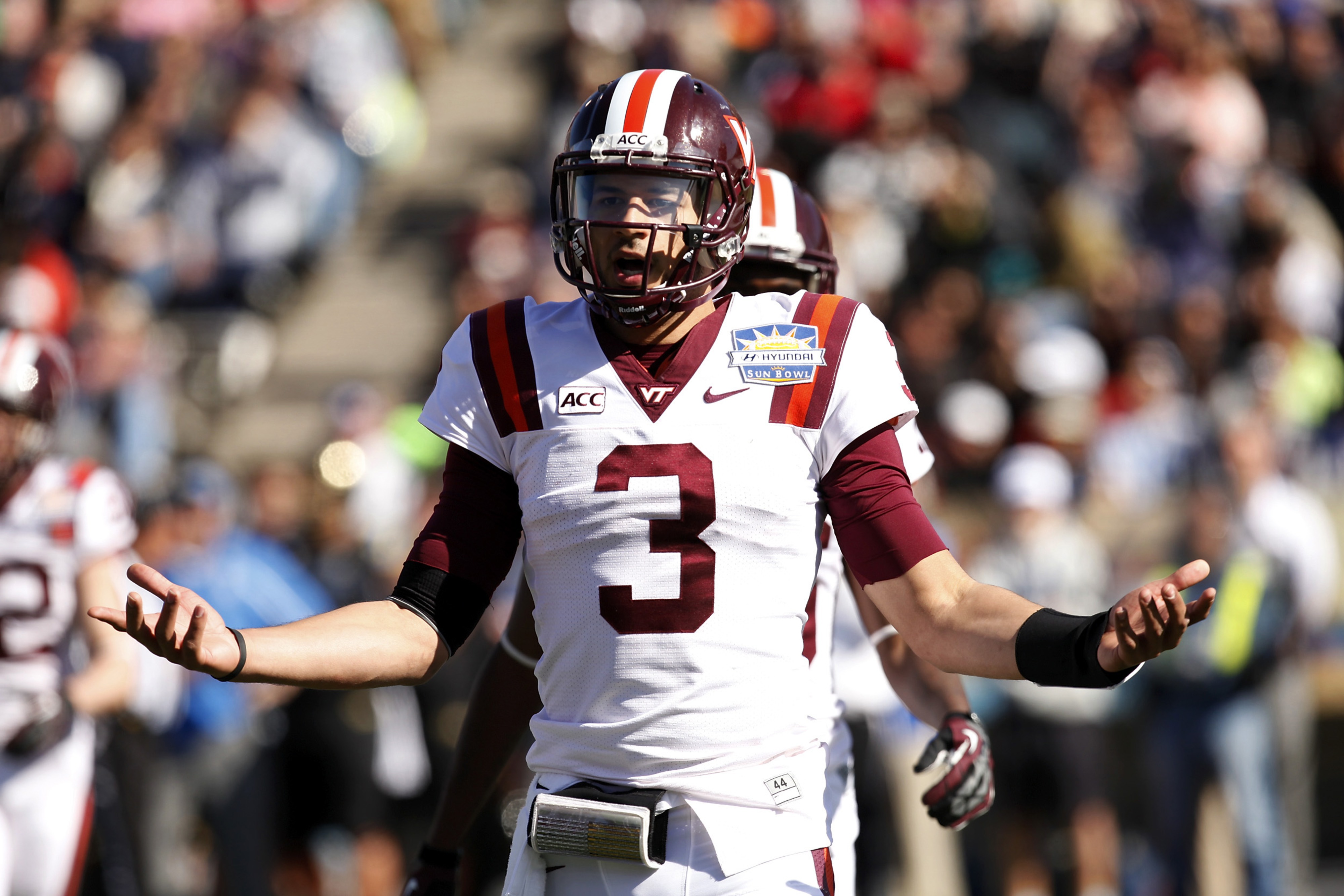 Before you hit the "X" on your browser and say this is stupid, hear me out.

Thomas started his Virginia Tech career in 2011 and had a promising start as a sophomore. He finished the season with over 3,000 passing and 19 touchdowns with 10 interceptions. This began some offseason hype around Thomas, leading many to believe he could compete to be a Top 5 pick in the 2013 NFL Draft if he progressed as people thought he would.

He followed up his promising sophomore year with an abysmal 2012 campaign that saw his yards per attempt and touchdowns drop while his turnovers increased. Thomas decided to stay in school and finished out 2013 with an underwhelming, but not necessarily bad season. Statistically he was more in line with the season that started up his hype train, but he still left a lot to be desired on film.

Many have compared Thomas to Carolina Panthers quarterback Cam Newton, mostly because their style and size are similar. Thomas is an imposing quarterback standing at 6'6" and over 250 pounds with the athletic ability to run past you and over you. While his mobility isn't what you'd expect from the type of athlete he is, that threat is still there.

Thomas also has the biggest arm in the 2014 NFL Draft. Simply put, he can fit the ball in windows no one else in the draft can. Thomas threw at the football at the 2014 NFL Combine clocking in at 60 miles per hour, the highest velocity of any quarterback who threw at the combine since 2008. Simply put, he's got a howitzer but he only half knows how to use it currently. 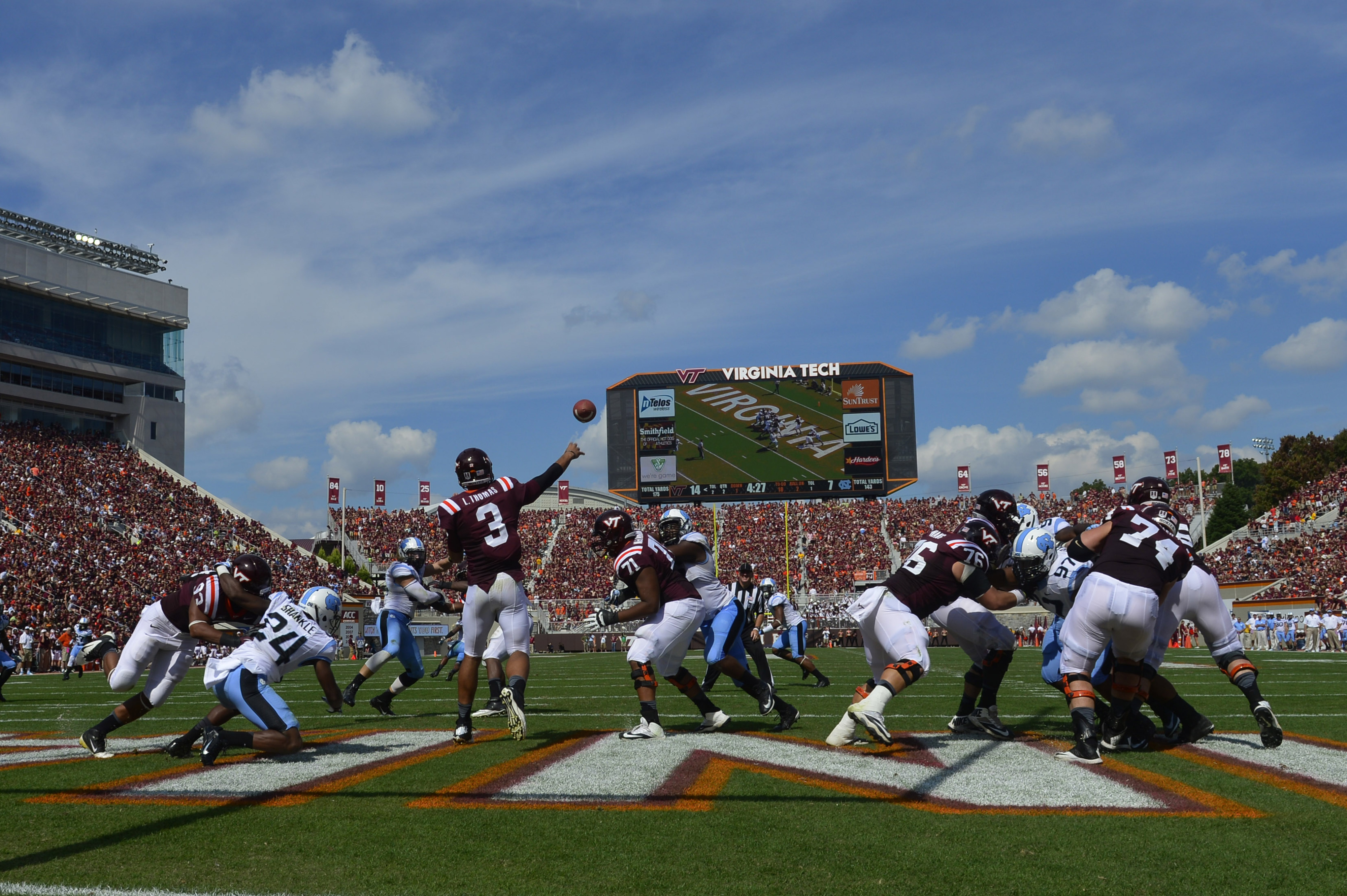 You're about to tell me how Thomas completed just five passes for 34 yards and an interception against Alabama now, aren't you? I knew it. He did. He wasn't very good in that game, albeit he did have eight drops in that game, four of which were all throws over 10 yards, some over 20 yards in the air that would have been big chunks of yardage.

I know. Logan Thomas is a big project and the Jaguars need a quarterback now, but in reality none of the players they're going to pick in the second or third round are going to be ready to start out of the gate. They're going to all have to sit.

The odds are already stacked against you when you wait and look for guys in the second round and beyond because typically they are either extremely raw or have fatal flaws that are just too much to overcome. Thomas falls into the former more so than the latter. If you're going to wait to pick a quarterback anyway, why not pick the one with the most physical tools in the draft with the biggest arm in the draft?

While Thomas looked awful in the nationally televised game against Alabama, when you go back and watch the game from an evaluation stand point, he's not that bad. There are certainly warts, but there are also positives. It's also worth noting, as Greg Cosell did in his latest article for Yahoo! that it was Thomas' first live game in a completely new offense that actually utilized NFL passing concepts.

Thomas is of course full of flaws that will need to be corrected at the next level, just like most of the prospects in the 2014 draft class. While he has good velocity on his throws downfield, he lacks touch in the shorter routes such as screens and such, and just rifles them.

Jags in no man's land for a QB

The Jacksonville Jaguars likely won't pick a quarterback with the No. 3 overall pick, but they're in a tough spot waiting for one to fall to them at pick 39 in the second round.

Jags in no man's land for a QB

Cosell notes that Thomas has slow eyes, but I think it was more of him learning a new system and getting comfortable with the types of throws he was now being asked to make. It seemed as the season went on for Virginia Tech Thomas was more comfortable and looked more natural passing the football.

His overall point is what stands out the most however, and what I'm trying to get it: Thomas has all of the physical traits you want in a quarterback. He's massive, he's athletic and he has a howitzer for an arm. While his week at the 2014 Senior Bowl was as erratic as his accuracy at times, it seemed the general feeling was that NFL scouts and coaches liked what they saw from Thomas in the simple fact that he was able recognize and work at where he needed to improve.

But for me, if I'm waiting around to draft a quarterback, I'm picking the player with the most upside rather than the guy with the limited ceiling. Odds are neither are going to hit, but if one is going to hit I'm hoping it's a guy like Thomas more than a guy like Aaron Murray.