From now until the day after the 2014 NFL Draft, Big Cat Country will be holding a fund drive to raise money for the Tom Coughlin Jay Fund, which helps families of children with cancer.

Big Cat Country today will start a Jay Fund NFL Draft Drive that will run from today through the next two weeks through the NFL Draft to help raise money for Tom Coughlin's local charity. This will be the first ever fundraising drive by Big Cat Country, to my knowledge, but the Jay Fund is something that many of us in the Jacksonville and Jaguars community should be very familiar with.

It won't be just us helping raise money, as we'll be in competition with SB Nation's New York Giants blog, Big Blue View, to see who can raise the most for the Jay Fund over the course of the next two weeks. The total amount raised between now and May 11th will be tabulated by the Jay Fund and a winner will be announced. Lil' ol' Jacksonville is in direct competition with big ol' New York. I think we can come out on top, Jacksonville's beaten the odds before.

A little bit about the Jay Fund for those unfamiliar:

The Tom Coughlin Jay Fund Foundation was created in 1996 in honor of Jay McGillis. Jay was a special young man who developed leukemia while a member of Coach Coughlin's team at Boston College. In the eight months between Jay's diagnosis and the day he lost his battle with cancer, the Coughlin family saw first hand the physical, emotional and financial strains the illness caused the McGillis Family. After going through the tragic events with Jay's family, Coach Coughlin vowed that if he ever had the chance, he would create a way to help families with children battling cancer.

Coach Coughlin kept his vow and started a foundation to BE THERE in Jay's honor. Since then the Jay Fund has evolved in size and scope helping thousands of families in Northeast Florida and the New York/New Jersey Metropolitan Area who are fighting childhood cancer.

The drive will be centered around our NFL Draft coverage, hence "Draft Drive". Every post that revolves around the NFL Draft will have a link near the end where you can donate to our drive if you wish.

Most of us have been touched by cancer in some way or another. My mother-in-law is a breast cancer survivor.

In the "Dedicated To" field, simply enter "Big Cat Country" so we can keep track of the donations. Every amount helps. 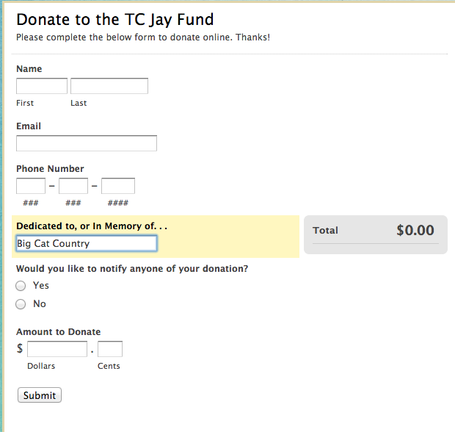