Jaguars fans came out in full force for the second of two days of rookie camp on Saturday.

The Jacksonville Jaguars held their second of two rookie camp practices on Saturday and fans were excited to see what No. 3 selection, Blake Bortles, would look like with weapons like Marqise Lee and Allen Robinson. Really excited. The Jaguars announced an attendance of 6,214 fans on Saturday, a record for any practice in the franchise's history. 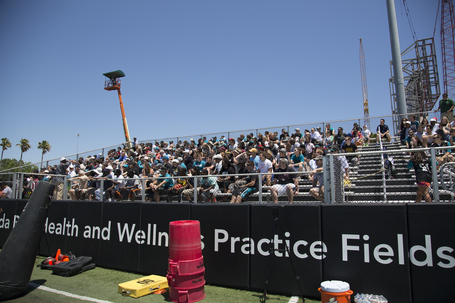 The two-day rookie minicamp features the nine players selected by the Jaguars in the 2014 NFL Draft, the 17 undrafted free agents signed shortly after the Draft and 27 players trying out for contracts. Bortles of the University of Central Florida was the first quarterback selected in the draft and is the obvious draw for fans.