Toby Gerhart is the most important player on the Jaguars offense

The Jacksonville Jaguars will have a completely new looking offense at a lot of positions in 2014, but the most important one is going to be running back Toby Gerhart.

Share All sharing options for: Toby Gerhart is the most important player on the Jaguars offense

The Jacksonville Jaguars made the decision to let fan-favorite and long time veteran running back Maurice Jones-Drew hit the free agent market during the 2014 offseason. With Jones-Drew's departure, it created an immediate need at the running back position, one that general manager Dave Caldwell quickly filled with that need by signing Toby Gerhart in free agency.

It was a bit of a surprising move, as many including myself, thought that the Jaguars might address running back in the 2014 NFL Draft. Instead, Caldwell made a move similar to that of his old boss in Thomas Dimitroff in his first season with the Atlanta Falcons signing Michael Turner in free agency.

The Falcons in turn rode Turner until his wheels fell off, as dehumanizing as that sounds, and I would think that's exactly what the Jaguars plan to do with Gerhart. Turner spent five seasons with the Falcons, carrying the ball just over 1,400 times for over 6,000 yards, including a career-high 376 carries in his first season in Atlanta.

Like Gerhart, Turner was backing up an all-pro running back with the San Diego Chargers and didn't have much wear and tear, but was a bigger do-everything back the team could lean on with a rookie quarterback and revamped offensive line. 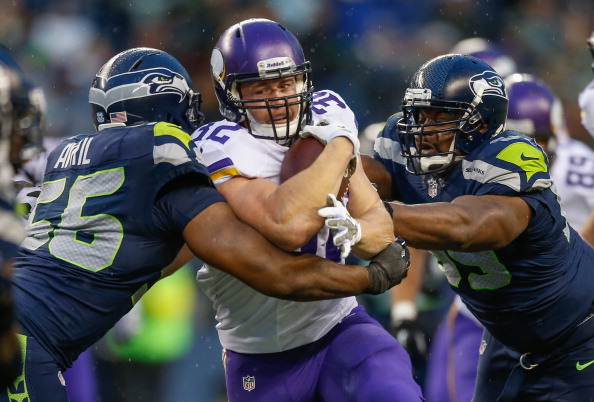 While it's likely the Jaguars start the season with Chad Henne at quarterback rather than rookie Blake Bortles, their offensive line is going to be completely new from last season for the most part. The Jaguars are going to need to lean on Gerhart heavily in both running the football and catching the football out of the backfield.

"He's a horse," Jacksonville Jaguars running backs coach Terry Richardson said of Gerhart's running style. "He's a big guy, and I talked to one of his former coaches, and he was saying Toby had the strongest legs he's been around in terms of his leg drive and leg power. We're excited about that."

Gerhart has the the running style to handle that kind of work and the style to punish defenses down the stretch. While he hasn't seen a lot of action, playing behind Adrian Peterson in Minnesota, he did start a five game stretch in 2011 and was fairly productive. He seems to always be working forward and breaks a lot of arm tackles, which helps his yards per carry as he doesn't have the greatest home run speed.

According to Pro Football Focus, Gerhart ranked fourth in the NFL in yards after contact per rushing attempt (3.8), albeit on only 36 carries. In 2011 however, when he had over 100 carries on the season, he still averaged 3.0 yards after contact per attempt. Gerhart also ranked fifth overall in PFF's 2011 elusive rankings, with 27 total missed tackles on 132 total touches. Cumulatively over the past four seasons, Gerhart has forced 50 missed tackles in 276 rushing attempts for an elusive rating of 56.88, which would rank him fourth overall in the NFL in 2013.

Is Gerhart going to have a 1,700 yard rushing season his first year with the Jaguars? I personally don't think so, but I think his production is going to surprise a lot of people.