The Jacksonville Jaguars could decide to develop the empty shipyards near EverBank Field in the future and will decide within the next six months.

Share All sharing options for: Jaguars could develop Jacksonville shipyards

The Jacksonville Jaguars have been doing renovations to EverBank Field, which include but are not limited to the new massive scoreboards, as well as owner Shad Khan investing in some Jacksonville properties such as the Laura Street Trio. The Jaguars could also potentially develop the long-empty shipyards lot near EverBank Field and could decide to do so within the next six months, according to a report in the Jax Daily Record.

The shipyards have been empty for as long as I can remember and many a developer has come and gone with promises to turn it into a commerce center, water front condos, etc. but nothing has ever seemed to develop. Jaguars president Mark Lamping and owner Shad Khan have mentioned multiple times about developing the 40-acre lot and how it would be a good step in revitalizing downtown Jacksonville, even mentioning they could take matters into their own hands.

It looks like they could decide to do that.

Per the Jax Daily Record:

"We want it to be something that meets several goals: Makes a trip to the sports complex more attractive, supports more people living Downtown and more people working Downtown," Lamping said Wednesday before a media tour of the EverBank Field renovations.

"And if we get involved, we're going to make sure that it has some Jaguars theming as part of it," he said. 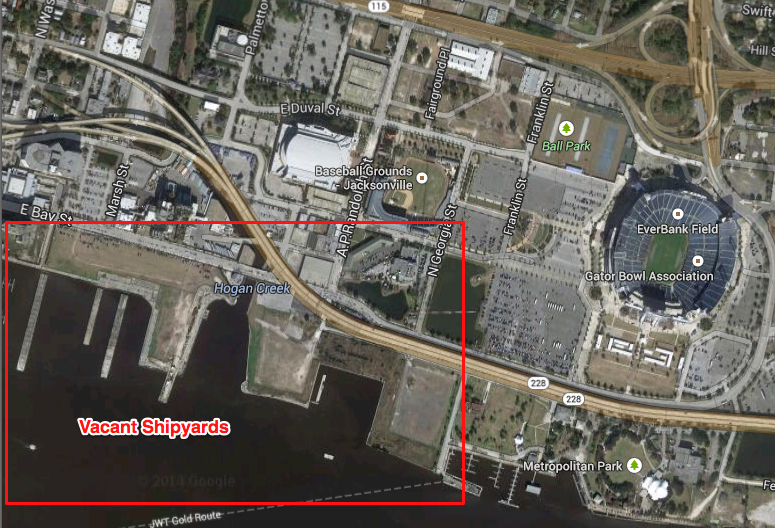 The idea the Jaguars seem to have for the shipyards include rental apartments, retail shops, entertainment in the form of restaurants and bars, as well as a multi-purpose facility that could be used as a practice field for the Jaguars or visiting teams for things such as the TaxSlayer Bowl.

There has been talk for years of the possibility of an indoor practice facility due to the consistent weather uncertainty in the area during the months of training camp, so that most certainly could be an option going forward if the team decides to develop the property.