Should the Jaguars run more pistol formation in 2014?

The Jacksonville Jaguars mixed up some plays and formations in Jedd Fisch's first season as offensive coordinator, and one they were successful in was the pistol formation.

Share All sharing options for: Should the Jaguars run more pistol formation in 2014?

The pistol formation started to gain popularity in the big leagues when Jim Harbaugh of the San Francisco 49ers started to run multiple packages and plays out of the pistol and Jeff Fisch mixed in some formations in the Jaguars offense with Chad Henne in 2014.

It worked surprisingly well, at least passing the ball.

ProFootballFocus has been going through a series breaking down quarterbacks based on a specific parameters such as down and distance, formation, etc... Recently PFF looked at how quarterbacks did in the shotgun, pistol and under center. Shockingly, Chad Henne led in "success" and accuracy rating out of the pistol formation.

Perhaps surprising to see Chad Henne lead in success and accuracy percentages while posting a 116.7 rating. The pistol may get more play in Jacksonville in 2014.

Henne completed 85 percent of his passes for 160 yards and a touchdown in 20 passing attempts and 23 total pistol formation snaps.

What is the pistol formation?

The pistol formation was popularized by former Nevada head coach Chris Ault in 2005 and developed by Michael Taylor for Tom Kaczkowski's 1999 Ohio Northern University football team. It gives an offense the proverbial "best of both worlds" for hiby still allowing a downhill running game, while giving the quarterback the advantage of being in the shotgun for quick passing.

The pistol is versatile enough that the offense can still execute play-action passes like you would in the I-Formation as well as run things like read-option and speed option out of the formation. It gives the quarterback the ability to read the defense like he would in the traditional I-Formation or Pro Set as well as the benefit of the extra time allowed from being a few yards deep at the start of the play, like in the traditional shotgun formation.

There are also differing variations of the pistols with dual running backs, tight ends or wide receivers in the backfield in a diamond formation.

How the Jaguars used the pistol formation in 2013

The Jaguars first unveiled the pistol formation against the Denver Broncos in Week 6, with Chad Henne under center. The team surprisingly never used the formation with Blaine Gabbert.

The play pictured above is in the base pistol formation and was a hand off to the right side with Uche Nwaneri, the right guard, pulling around the right tackle and tight end and the play saw Maurice Jones-Drew run for five yards.

It's a pretty standard play out of the formation, but it also points to that it can somewhat be a base formation in an offensive playbook. The Jaguars ran the pistol formation a total of 64 times, mostly running the football.

Going back and watching every play the Jaguars ran out of the a variation of the pistol formation, I feel it should be something the team explores going forward and add more of in the playbook. The passing plays the Jaguars ran seemed fairly basic, as the vast majority were short quick passes to receivers wide. Most of these were bubble screens or smoke screens, giving the receiver blocking in front of him and sometimes with a play action fake and the offensive line selling a run block. 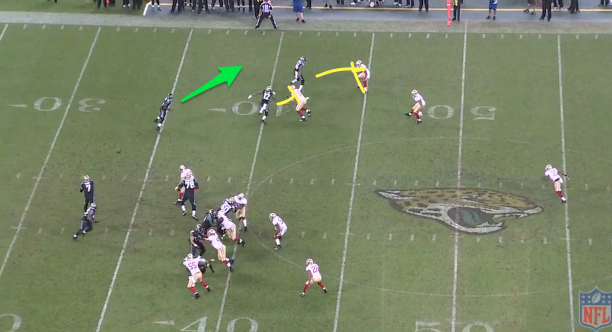 A s mentioned above, one of the benefits of the pistol formation is the amount of different plays you can run out of the same basic formation and the Jaguars ran the ball out of it quite a bit. While they averaged just 2.0 yards per carry running out of the pistol, the Jaguars struggled as a whole to run the football.

Going forward with Toby Gerhart, who runs the ball well downhill, as well as catching the ball out of the backfield, it might be beneficial to run more pistol formation. The interior of the offensive line undoubtedly needs to play much better, but with Blake Bortles waiting in the wings and offering some things with his feet, more pistol would be a good thing for the Jacksonville Jaguars.