Curious what Blake Bortles rating in Madden 15 is going to be? Don't worry. We know.

Each year millions of people buy the next iteration of the Madden football franchise and each year people frantically search the internet for the ratings of their favorite team's players, notably their rookies. Don't worry. We know that Blake Bortles is a 78 overall in Madden 15.

A 78 overall rating sounds about right for a Top 5 rookie quarterback, but then again I haven't played the game in quite a while. Comparatively, E.J. Manuel was a 74 overall last year as the first quarterback drafted and Geno Smith was a 74 overall. Robert Griffin III was an 83 overall in Madden 2013, but he was also much more of a threat rushing the ball than Bortles is.

Bortles rating is fairly reflective of his real world skill-set, I believe. He has good short accuracy with it tapering down a tad each level. He wasn't the most accurate with his deep ball at UCF, but it was adequate and that is what it shows here. He's also rated fairly well at throwing on the run, which is something he'll likely do a lot in his NFL career.

What do you think about his ratings?

SB Nation has the rest of the Top 13 picks of the 2014 NFL Draft ratings here. 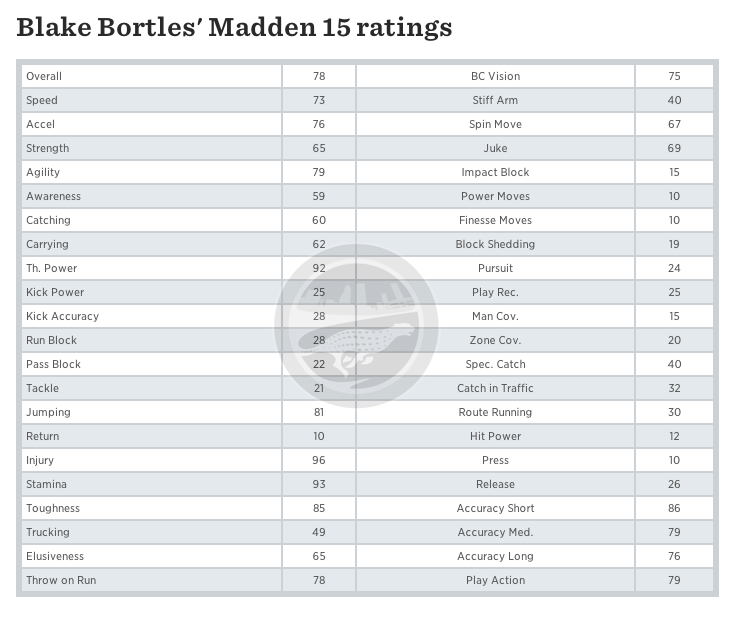