The new scoreboards are ready and by God are they beautiful.

The Jacksonville Jaguars will officially unveil the world's largest scoreboards on Saturday evening following the conclusion of a soccer friendly between D.C. United and Fulham FC and prior to the start of a Carrie Underwood concert.

The team has completed a near $63 million renovation to EverBank Field to give the facility a massive scoreboard on each endzone, panning 60 feet high and 362 feet long making them the largest in the world, as well as a new two-level plaza area (...AHEM, pools). 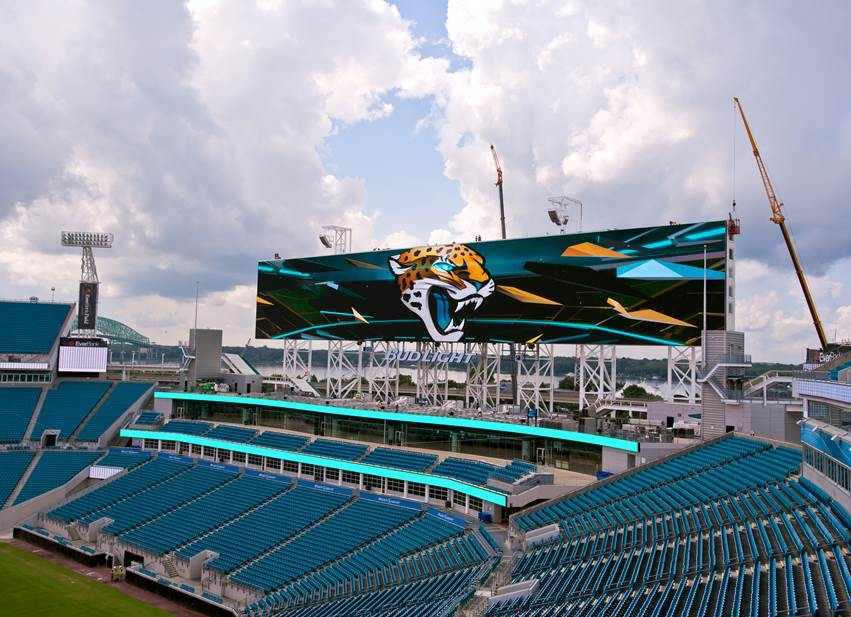 "We are truly excited about Saturday’s unveiling because it will give our fans an idea of how great the in-stadium experience will be when the Jaguars take the field here next month and well into the future," Jaguars Owner Shad Khan said in a team press release. "Our vision from the beginning was to make EverBank Field a destination, to give our fans the best game day experience possible, and to keep and attract world-class events to downtown Jacksonville and the surrounding community. I am confident that all of these goals will be met."

The end zone displays will each measure 60 feet high by 362 feet wide and feature a 13HD pixel layout.There will be more than 21,700 square feet of digital canvas, with each display spanning longer than a football field. Not only that, but each screen can feature three full-size HD windows, allowing the Jaguars to show more than just the game live or on replay at a given time.

The 13HD technology was selected for the EverBank Field installation primarily because of the high brightness that helps overcome the Florida sunlight, especially in the direct sunlight received by the north end zone.

"The Jaguars have done a great job in preparing an exciting unveiling event for the world's largest video displays," Daktronics Vice President of Live Events Jay Parker said. "These displays will set a precedent in professional venues in terms of the fan experience and what can be witnessed by going to the stadium. The team can show a never before seen combination of content with essentially three huge HD screens on one massive LED display. It's going to be amazing when they fire them up to host their first home football game."

The scoreboards will be unveiled around 8 p.m. ET, at the conclusion of the match between Fulham and D.C. United and prior to the 8:30 start of the Carrie Underwood concert inside EverBank Field.