Blaine Gabbert ruined my life. If you're also a fan of the Jaguars, he ruined yours too.

In 2010, in the first half of the season, the Jaguars were red hot. The running game was nothing to be joked about with the re-emergence of Vince Manuwai and steady play from MJD, who was in his prime.

Then, it happened: the team fell apart. Jones-Drew lost a few steps to an injury. The hot David Garrard flamed out and threw a season-ending interception over Jason Hill's head against the Colts.

Quarterback remained an issue for the Jaguars. Fans were fed up. Leading up to the 2011 draft, a lot of speculation about the Jaguars taking a QB arose. Rumors circulated.

"Ryan Kerrigan is their guy"

Me, personally? I wanted Kaepernick or Locker. I wanted a quarterback. I wanted a guy to shut the "they need Tebow!" people up. I wanted a guy who wasn't going to throw an interception to the wide-open Jason Hill. I didn't need Peyton Manning, I just wanted a decent Flacco-level player.

Draft day came. The Jaguars traded out of overall 16 to move up to overall 10. 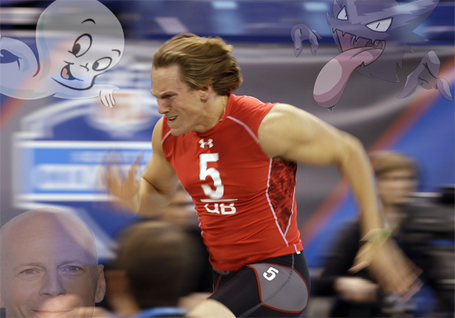 Blaine Gabbert SUCKED. Did I mention he ruined my life? I was in my first year of college when he was drafted. My first micro econ test after? I got a D(This was dropped and I ended up making a B in the class but still). Speech class? I almost fell asleep during my first speech.

Here's a list of some of the things that happened after Blaine Gabbert entered the NFL:

How could you be such a horrible person? At least Ben Roethlisberger is a good quarterback. If Blaine Gabbert wasn't running out of the pocket for NO REASON AT ALL, he was throwing a 3 yard checkdown to the fullback on 3rd and 10 like an asshole. After the first year of Gabbert, I was like "well hey, nowhere to go but up from here." NOPE. NOPE. SOMEHOW BLAINE GABBERT REGRESSED EVERY YEAR. One thing that kept us in some games was the fact Blaine Gabbert had consistently low INT totals.

That stopped happening. His last year with the Jaguars, Blaine Gabbert threw 1 TD and 7 interceptions. SEVEN. ONE TO SEVEN RATIO.

I didn't expect Tom Brady. I just wanted an OK quarterback. Hell, I wanted a top 30 quarterback so we could shut the Tebow-stans up. NOPE. The Jaguars could have signed a football-launching machine and did better.

And what's with the ghosts!? Was Blaine actually the little kid from Sixth Sense who could see dead people? 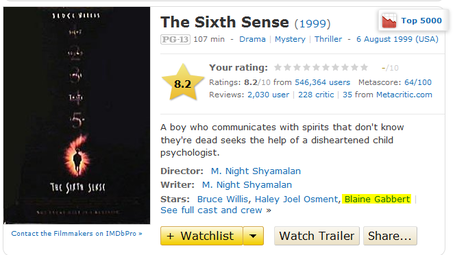 Was this the hint we needed to avoid this walking catastrophe?

Why did he block most of the fanbase on twitter?

WHY IS HE SO BAD?

"He just had an impossible situation"

GO TO HELL. What did you want the Jaguars to do? Hire ghostbusters? Re-wire his brain? Hypnotize him? Make him into a cyborg and control him with a remote? He had the EXACT SAME problems in college. He ran out of the pocket on a 3-man rush constantly and threw checkdowns to fullbacks there too. 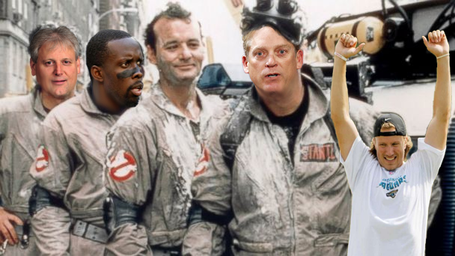 Pictured above: The Jaguars properly easing Gabbert into the NFL

HE'S WITH THE 49ERS NOW. AND WE DRAFTED BLAKE BORTLES TO REPLACE HIM. 49ER FANS BETTER HOPE KAEPERNICK STAYS HEALTHY. IF A SPACESHIP CAME OUT OF NOWHERE AND CRASHED INTO KAEPERNICK AND LEFT NOTHING BUT HIS ARM THE 49ERS SHOULD KEEP HIM IN THE GAME OVER BLAINE GABBERT.

How did Blaine Gabbert ruin your life? Please post how in the comments below.