The Jaguars remain committed to starting Chad Henne, but Blake Bortles has shown he should be the opening day starter.

Share All sharing options for: Blake Bortles should be Jaguars starting QB

The Jacksonville Jaguars, as of Friday August 29th, plan to start veteran quarterback Chad Henne against the Philadelphia Eagles in Week 1 of the 2014 NFL season. Head coach Gus Bradley and general manager Dave Caldwell entered this offseason, before they even selected Blake Bortles with the No. 3 overall pick, with a plan for what to do with a rookie quarterback.

That plan included whoever they drafted to sit and learn behind Chad Henne while refining their game.

That plan should change.

The Jaguars should start rookie quarterback Blake Bortles on opening day, simply because he's obviously the best quarterback on the roster. Through four preseason games, Bortles has shown time and time again he has the ability to thrive under pressure and make big plays happen. He's consistently been accurate throwing down the field and nearly a third of his passes have been completed down the field.

I've gone through the four preseason games and charted Bortles throws, normalizing them from the line of scrimmage based on how far the pass traveled in the air and plotted them on a heat map. 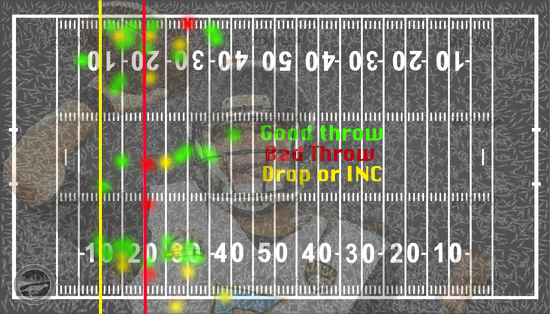 Through the course of the preseason Bortles completed 32-of-51 passes for 521 yards and two touchdowns. He's gone against third team defenses, back up defenses and starting defenses. He's played with the first and second team. He's played with all different wide receivers and offensive line combinations. He's never once look overwhelmed or like the game was too big for him.

Every new challenge the team has given him, he's excelled. On Bortles touchdown pass to fellow rookie Marqise Lee on Thursday evening, he did everything you expect an NFL veteran to do on a given play. Bortles started his read, pump faked to move the safety to the other side of the field and then came back to his left to hit Lee in stride for a 57-yard touchdown, with pressure bearing down on him.

Quite frankly, Blake Bortles give the Jaguars the best chance to win. The instability on the offensive line is irrelevant, as Chad Henne being in the lineup doesn't really alleviate that problem. No disrespect to Henne, but he's simply not as good. He's been a checkdown machine the majority of the preseason, which is what he does a lot of during the regular season.

Bortles admittedly hasn't been flawless in the preseason. He's tried to fit some passes in tight windows and nearly been picked off a couple of times, but so has Chad Henne. He's going to make those mistakes because he's a rookie. Even if he sits the entire season, he's still going to make them in game action, because he's only going to learn what works and what doesn't in that regard during live games.

There are a lot of people using the offensive line as a crutch for not starting Blake Bortles, but really the pass protection has not been a big issue whatsoever. Bortles was sacked twice against the Falcons on some really bad blocks, but those were also missed blocks by players who likely aren't on the final roster. He was also working with a line that was three fifths backups or backups of backups against the Falcons first team defensive line.

When Bortles has played with the actual offensive lineman who will be on the final roster, he was sacked just twice and one of those two times was on a free blitzer. Even if we want to dwell on the offensive line issues in pass protection on Thursday night, he still ended the night completing 4-of-6 passes for 86 yards and a touchdown.

The Jaguars had a plan and it seemed like a good plan, but plans change, circumstances change. The circumstances for the Jaguars have changed. The Jaguars offensively are a young team, it makes the most sense to let your young quarterback grow with the young offense and take their lumps early on. Bortles doesn't look like a player who's going to break mentally.

I ask once again, what does Chad Henne do better than Blake Bortles? How does he give you a better chance to win?