Why can't the Jaguars run the ball?

So why can't the Jaguars run the football? Is it the offensive line? Is it Toby Gerhart?

Share All sharing options for: Why can't the Jaguars run the ball?

The Jacksonville Jaguars have struggled to run the football all offseason. Through the preseason and the first two games of the regular season, the running game has been nonexistent. This has put more stress on the Jaguars passing game and asking Chad Henne to do a lot of the work and without a running threat whatsoever, the team is limited what they can do offensively.

Through the first two weeks of the season, defenses have stacked the box against the Jaguars offense, walking at least one extra defender near the line of scrimmage to add an extra man to defend the run. Not only that, but teams also seem to often run blitz gaps to further disrupt the Jaguars running game. Combine that with some bad mental and physical errors by offensive lineman and tight ends and you get just a rough, rough day trying to run the ball.

Like Sunday, when Toby Gerhart had seven carries for eight yards.

On this particular run, the play is dead as soon as tight end Marcedes Lewis misses the block. Lewis' job on this play appears to pull to the backside and pick off the backside defender, in this case a blitzing linebacker. The Jaguars are trying to run an inside zone play with a seal, which relies on Lewis pulling across and sealing off the backside so Toby Gerhart has a clear path on the play. With Lewis' whiff however, it allows the backside defender to get a tackle on Gerhart and destroy the entire play. The play ended as a zero yard gain but if properly blocked might have netted four to five yards on the ground and picked up the first down.

Jaguars offensive coordinator Jedd Fisch has taken a lot of heat for running zone stretch plays with Toby Gerhart. Gerhart's more of a down hill runner with some build up speed that can break tackles, but he can be an effective stretch runner if the blocking is there. He's patient and lets his blocks setup for him, but on this play it's dead as soon as he catches the pitch. Left tackle Luke Joeckel is supposed to cut block the outside defender to eliminate him from the play, which will allow the fullback to come around and pick up the inside linebacker flowing over. If this goes to plan, Gerhart should be able to get a good chunk of yardage. Joeckel whiffs on the play, though, and the fullback is forced to pick up the defender who should be on the ground, which leaves the linebacker flowing down the play open to force Gerhart to kick the run back inside into the traffic he should be able to run around.

Simply put: If the cut block is executed properly it's likely Gerhart picks up a 10+ yard chunk on the play, maybe more.

Another stretch play and another critical missed block that kills the run before it gets started. The play is disrupted when No. 99 beats rookie Brandon Linder to the inside, which also disrupts center Jacques McClendon from blocking down with the rest of the line. This frees up the Washington nose tackle because McClendon is blocked off by No. 99 beating Linder inside and Gerhart's running lane is disrupted and he's tackled for a one yard gain, which could have been a four or five yard gain.

Missed blocks, you get it.

This is another stretch play, the same ones that people keep killing Gerhart and Fisch for, but again this play is ruined because an offensive lineman can hold a block from the snap. Jacques McClendon is knocked back off the snap by the Washington nose tackle and Brandon Linder is beat to the inside disrupting Gerhart's running lane. Gerhart has to continue wider, because if he tries to cut back inside he's going to get tackled by defenders. Gerhart has good blocking on the edge, so he tries to follow his blockers and should have picked up six to eight yards on the play at least, but with the defender pushing McClendon back and getting in the way to disrupt, he's able to make the tackle for just a two yard gain.

Sometimes it looks like there's a lot of room, but there's not.

This is the play that Toby Gerhart got crushed for on Twitter all day long Monday. The RTs and LOLs with emojis about how bad of a run it was and by awful Gerhart's vision was. 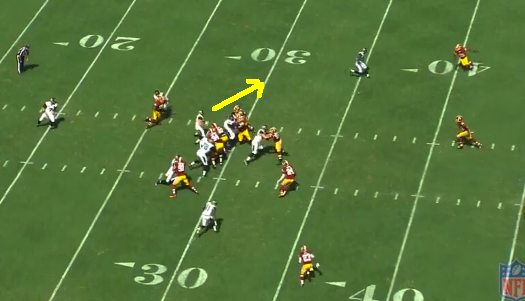 I was asked about this play when it was being retweeted around and said that it looked bad, but I wanted to wait until the All-22 film came out until I really commented on it. Sometimes from TV angles and even the All-22 angle, you can't tell what's going on in the "trash" on the line of scrimmage. It certainly looks like there's acres of space to the left and Gerhart just doesn't have the vision to see it, but unsurprisingly that's not the case.

As you can see, from the endzone view of the play there's a linebacker who smartly doesn't get caught in the trash of the blockers and comes around to seal the gap. It's actually not a poorly executed play by the Jaguars, it's just better executed by Washington because the linebacker doesn't get sucked inside and is able to seal the play. As you can clearly see, there is hardly acres of space for Gerhart to run through so he tries to get small and slip the tackle to no avail. I guess you could say the Jaguars fullback might be able to peel upfield and pick up the linebacker rather than picking up the wide defender, but I don't really know the assignment so I can't say. It's also possible that Zane Beadles or Joeckel are supposed to make it to the next level and seal off that linebacker rather than doubling up on the end, but again I can't say for sure.

The Jaguars only ran the ball seven times against Washington, but they had chances to pick up chunks of yards and extend drives, but simply just didn't execute. Often on run plays all it takes is one missed block to kill a play.