Can you watch the Jaguars vs. Colts game on Sunday?

If you're not coming to EverBank Field on Sunday, will you be able to watch the Jaguars home opener on TV?

Share All sharing options for: Can you watch the Jaguars vs. Colts game on Sunday?

The Jacksonville Jaguars are hosting the Indianapolis Colts on Sunday. If you can't be there for any reason, will you be able to watch it on television? 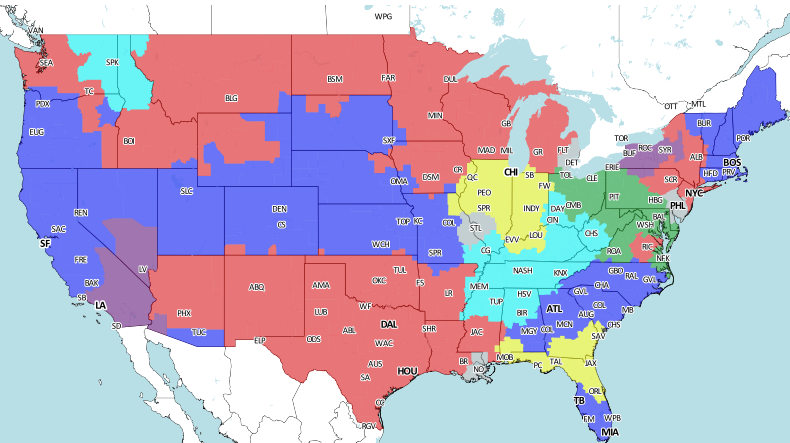 Thanks to 506 Sports for the easy-to-read map. The yellow represents markets where the Jaguars-Colts game will be on.

Unlike last week, it looks like Orlando and everyone north is going to be getting the game, so you Tallahassee brethren (and even some of y'all in Alabama) will be able to tune in. However, South Florida is getting the Oakland Raiders vs. New England Patriots game (old people?) and most of the country will see the Houston Texans vs. New York Giants.

However, the late game will be the Denver Broncos vs. Seattle Seahawks game for the majority of the country, so that'll be fun.

The announcing for Jacksonville's game will be handled by Tom McCarthy (who?) Adam Archuleta (the guy who won The Voice?) on CBS.