What is wrong with the Jaguars secondary?

Why has the Jaguars secondary been so bad, and can it be fixed?

Share All sharing options for: What is wrong with the Jaguars secondary?

So, uh, the Jaguars defense.

Through the first 2 weeks there has been a lot of disappointment surrounding the team. But many expected the Offense to struggle, as long as Chad Henne was QB and there were still OL issues. There have been 3 rookie WR's playing major snaps through 2 games. That isn't exactly a formula that you should expect instant success from.

But the Jaguars Defense was supposed to be the focal point of the team. They were supposed to carry the heaven burden of keeping the team in games until the Offense started clicking. After all, we saw it numerous times last year. Gus Bradley is a former DC of the best defense in the NFL of the last 2-3 years, and the defense is loaded with former Seahawks and 2nd year Jaguars expected to make a big jump.

But, they haven't. For some reason, the Defense has been just as big of an issue as the offense.

Against the Eagles, The Jaguars had a tough time covering TE's and the middle of the field, but they were bailed out by the DL getting pressure on Nick Foles. Against Washington, the coverage was more of the same, but with more miscommunications and less pressure up front, their showing was much worse than week 1.

Why has the secondary, which was supposed to be the deepest and most talented unit of the defense, struggled so mightily? I think it has to do with a mixture of lack of talent at some key spots and silly mental mistakes at others. One of these is correctable and should not be expected to become the norm. The other is quite the opposite.

Possibly the biggest issue the Jaguars have in the secondary right now is that, outside of Jonathan Cyprien, they have a pretty major lack of talent at Safety. Winston Guy has not been impressive in really any facet since he started getting major snaps last season, Josh Evans looks like he has regressed or is out of place in this scheme, and Chris Prosinski wouldn't be on most 53 man Rosters.

Here is a good example of why the Jaguars safeties simply are not cutting it.

On the 3rd play of Sunday's game vs Washington, RG3 and Washington decided to take an early shot at the weakness of the Jaguars defense and sent DeSean Jackson on a simple go route deep downfield. The result was Jackson almost catching the pass (it was ruled incomplete, but could have gone either way) for a 52 yard gain, into redzone territory.

Why did Washington almost complete a 52 yard pass on the 3rd play of the game? Because the Jaguars do not have a capable FS on the roster. 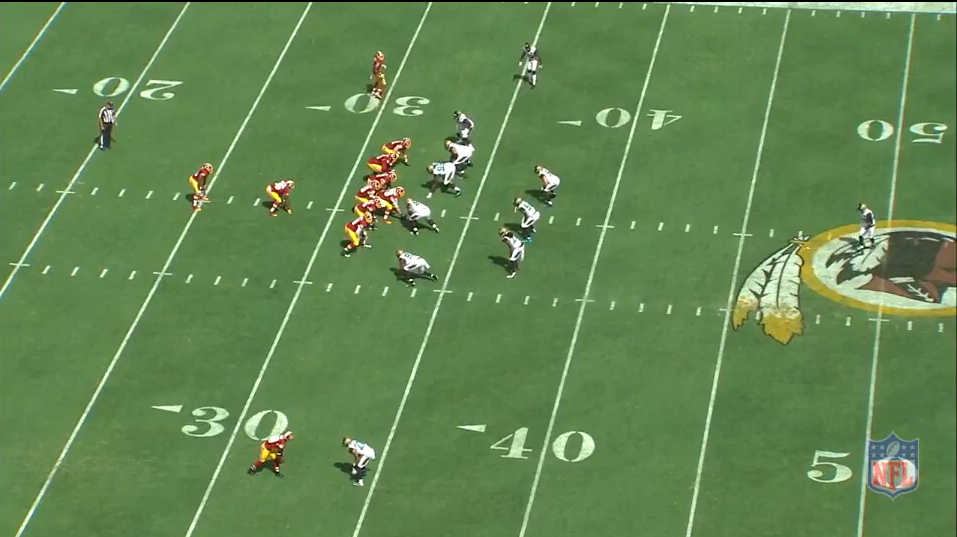 Washington came out in 21 personnel (2 RB's, 1 TE) and pre-snap motioned DeSean Jackson to the left side of the formation. The Jaguars defense is in what many would call their base look, with both CB's near the LOS, 3 LB's, the SS rolled down near the LOS, and the FS in a single high look. Having the SS near the box and the FS (Josh Evans) as the single safety in the middle of the field shows the offense that the Jaguars are more than likely running Cover 3, meaning Alan Ball will be matched up with DeSean Jackson 1 on 1, but should expect safety help downfield.

Griffin's first read is the WR on the weak side of the formation, who is also running a go. The whole design of the play was to send Washington's two speed WR's downfield and force the Josh Evans to make a decision on where he should roll his coverage.

The All 22 angle of the play shows a better angle of RG3's decision making. His first read did not get enough separation downfield, so he quickly shifts focus to DeSean Jackson on the left side.

As soon as Evans sees RG3's eyes shift to the left of the field, he should know immediately he needs to roll his coverage, but he hesitates because of the TE running down the seam.

Illustration below shows RG3 lock onto Jackson and begin to step into his throw. RG3 is probably a top 3 deep ball passer in the NFL, so it is pretty hard for safeties to make a play on the ball from the middle of the field. Evans does do a good job of breaking at the proper time though, as you can see he turns his hips to run before RG3 releases. 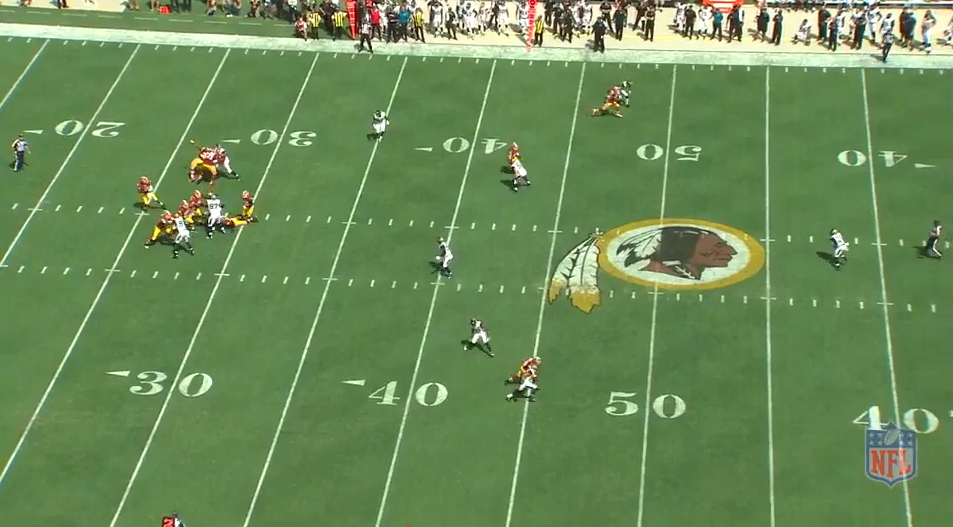 So why was Evans not able to disrupt the pass?

Quite frankly, he just isn't cut out for FS in this scheme. In single high looks, the safety has to have a lot of range to aid the corners, because corners should not be expected to be able to run with WR's step for step 50+ yards downfield. Evans offers some things to the defense in terms of run support, but he does not have the athleticism or overall instincts to be able to line up as the deep safety this scheme needs to work.

Evans is not the only issue though. Winston Guy has really struggled in a starting role, dating back all the way to last year. He has the range they need to play FS, but his awareness is poor and he can't really be depended on in coverage.

The safeties are not the only members of the secondary struggling right now. The corners played well in Week 1, but against Washington they were downright bad. It is not a talent issue, though. Alan Ball proved last year he can be an above average starting corner in this league and Dwayne Gratz has shown good signs of development since training camp started. The reason the corners are struggling is because of mental errors across the board, which is still not something you want to hear, but it is less concerning.

The best example of miscommunication in the secondary comes from Washington's first TD, a 20-yard pass from Kirk Cousins to FB Darrel Young.

Pre-snap, Washington shows an empty backfield, and the Jaguars respond with a standard 4-3-4 Nickel Formation. 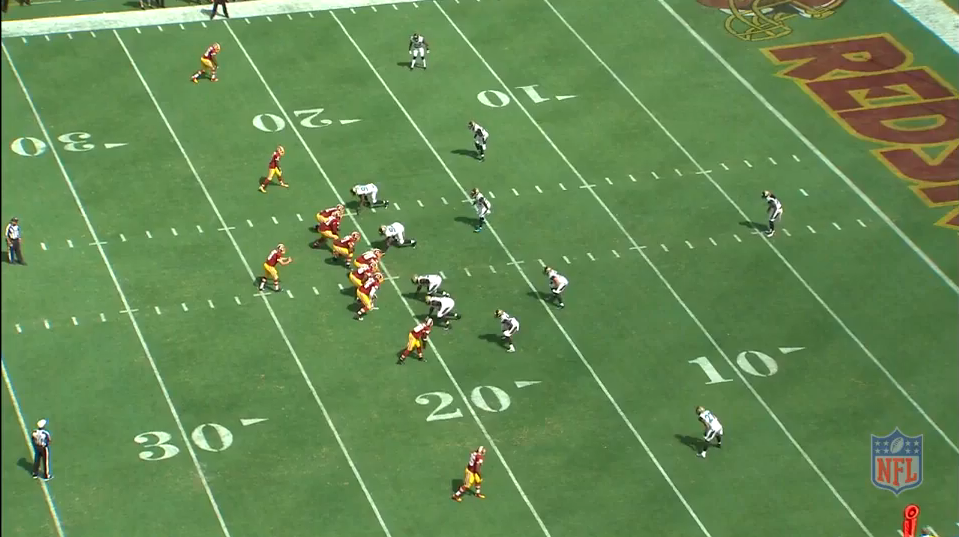 There is no corner lined up in the slot, so the LB (LaRoy Reynolds) has to carry the WR to necessary hook/curl depth (5-7 yards), where the FS (Winston Guy) should then overtake him downfield.

You can see as the QB begins to wind up his release, Guy comes downhill to attempt to make a play on the ball, assuming it is going to the slot WR. Gratz's responsibility in this cover 3 look is to carry the outside WR (Young, on this play) down the field. But for some reason, Gratz shoots inside to the Slot WR (possibly assuming that there was no safety help?) and this leaves Young wide open. 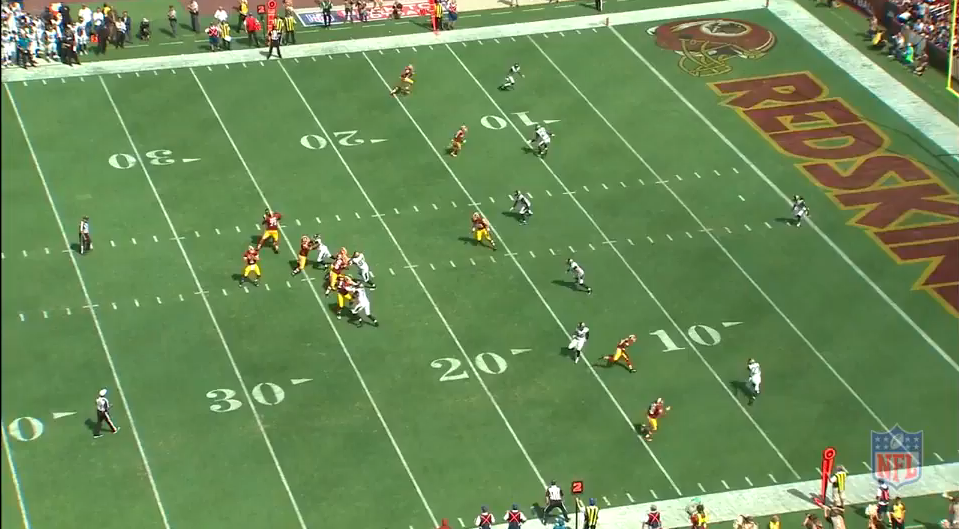 Obviously, this is a bad play. They scored. But as weird as it sounds, I'd much rather Gratz to give up a score because of a fixable mental mistake than to see him get flat out beat in coverage.

This was a common theme with the corners throughout the game. They looked lost and unprepared. This is unacceptable, but I do not expect it to be the norm throughout the year. The corners are still really talented, and I do believe in the coaching staff's ability to fix mental mistakes as the year goes along, so I am not worried about the corner play and I see the Washington game as an anomaly.

I expect the middle of the field defense will continue to be an issue, though. Even with Cypien back, they have limited talent behind him and at linebacker Posluszny has show he is at the point in his career where he is a liability when he is on the field on 3rd down.

The Jaguars secondary has its issues right now. I think some will be fixed. The others though? It could be a long year.