Paul Posluszny is struggling, but what can the Jaguars do?

The Jacksonville Jaguars have a $9.5 million liability on the field, but there's not much they can do about it.

Share All sharing options for: Paul Posluszny is struggling, but what can the Jaguars do?

We've talked about Posluszny before, about how his play on the field doesn't quite matchup to his paycheck ($9.5 million cap hit), but even coming off a season as a Pro Bowl alternate, he's becoming a liability on the field now, where as in the past he just was the guy you knew wouldn't mess up too much.

Posluszny had one bad play in particular on Sunday against the Indianapolis Colts where he appears to completely blow his run gap and allows Trent Richardson to move up the field with ease for a massive gain. 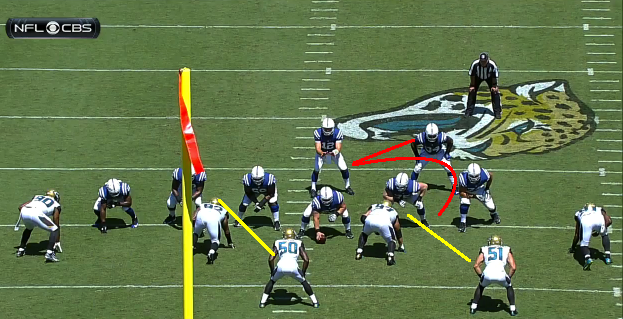 This is a pretty basic run play where rookie Telvin Smith and Paul Posluszny both crash down on the line with Posluszny picking up the backside gap. Smith goes where he should, forcing the play back inside which should be right to Posluszny who should be sitting right there in the hole, but the hole is wide open. Posluszny instead overruns the gap (and I'm assuming this is his responsibility, because it seems pretty basic) leaving the cutback lane wide open for even Trent Richardson to see. 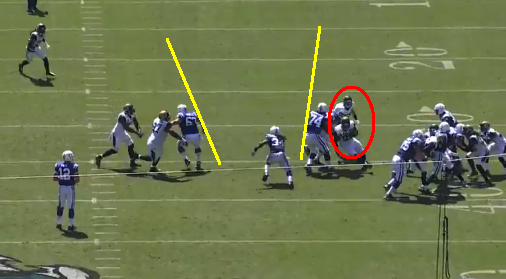 As you can see from the endzone view, with Posluszny overrunning the gap there's a massive running lane for Richardson to cut back to and run for 27-yards. Plays like this are starting to become too common for the veteran in the middle of your defense who's supposed to be the guy you can rely on. It's likely Poz is trying to do too much rather than sticking to his own assignment, but this is why Gus Bradley stresses worrying about your own job and not everyone else's. The Jaguars defense isn't all that complicated and they only run about four or five different coverages and such, but if someone isn't doing what they're supposed to do, you can get massive errors like this one.

Here's the play in full speed:

One of the big problems right now is Posluszny calls the defensive calls and gets the defensive line lined up, so it's tough to take him off the field. You don't really have anyone else with the ability to do that right now and I don't think most expected him to be such a liability just yet. He also makes a lot of money to be relegated to the bench so early in the season, despite the massive amounts of cap room the Jaguars have.

Posluszny is either going to have to have enough awareness to stop trying to make up for everyone else's mistakes, which in turn cause other massive mistakes, or they're going to have to shake up the linebacker corps. Something's got to give at some point.