The Jaguars offensive line looked much better Sunday and one reason was because of rookie center Luke Bowanko.

The Jacksonville Jaguars offensive line looked much improved from their 10 sack performance against Washington two weeks ago, though they still allowed four sacks on the day against the Indianapolis Colts, kind of. One of the key changes to the offensive line, which also run blocked significantly better, was rookie center Luke Bowanko starting.

Bowanko took over for a struggling Jacques McClendon late in the game against Washington and might have been the opening day starter if not for suffering an ankle injury in the preseason, but he was a welcomed addition to the lineup on Sunday. Bowanko was far from perfect, making some rookie mistakes, but he showed a lot of nice things consistently on the day. 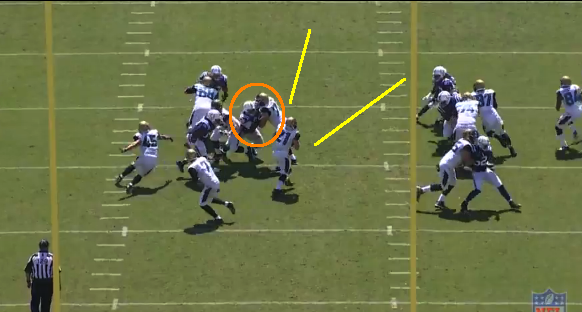 The Jaguars were able to run the ball moderately well in the first half, at least comparatively to the first two weeks of the season, and some of that had to do with what Luke Bowanko was able to do. In the picture above, Bowanko does a nice job of immediately turning the Colts nose tackle and opening up a running lane for Toby Gerhart to get through. This is exactly the type of blocking a back like Gerhart needs to get going and the result is a four yard gain on the play. Nothing fancy, just simple blocking on the play. 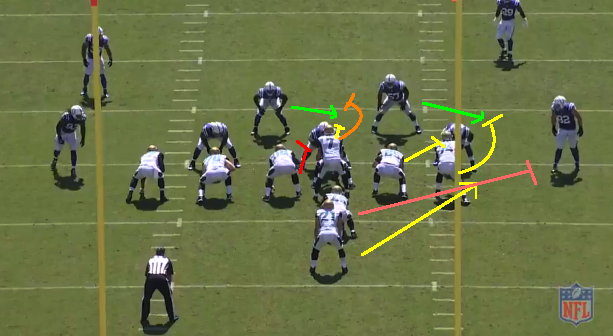 This play doesn't quite work out how it's designed, because Bowanko can't quite make it upfield to pick up Jackson. Jackson ends up making the tackle on the play for a five yard gain, but had Bowanko made it to the second level and picked him up it would have been a much larger gain, because Gerhart could have cut back upfield for more yardage.

The Jaguars are actually lucky they don't get flagged for a chop block on the play, considering Bowanko and the nose are engaged still when Beadles makes his cut. Not really anything Beadles could have done about it, but Bowanko needs to be quicker getting to the second level, which should come with time.

One impressive thing Bowanko does seem to have a knack for is reach blocking, especially when the Colts would walk one of their inside linebackers to the line of scrimmage and blitz the A-gap (gap between the center a guard). It's something Washington did all the time against the Jaguars with success, but Bowanko was able to pick it up and actually open holes for the running game.

By Bowanko being able to reach block and turn the linebacker from the play, it gives Denard Robinson a nice gap to squeeze through and pick up five yards on the play. Ricky Jean-Francois is able to get a hand on Robinson causing him to spin, thus disrupting and slowing the run however, so it might have been able to pick up more yardage.