The Jaguars are celebrating their 20 year anniversary this season and as a fan base, we've been through a lot.

Twenty years is a short amount of time.

In relation to the existence of Man, the Earth, the Solar System and the Universe, 20 years is a relative inconsequential blink of an eye. For the length of human existence, living to 20 meant that you survived the odds of disease, pestilence, war and random shit that existed solely to kill you and were in the twilight of your life. Had some kids, found a mate, and basically had another decade to dodge the odds of human existence. Now, with the advent of modern medicine, sanitation and education, it is considered a tragedy if one doesn't live past twenty in most developed countries.

Time dilation is a funny thing. Not in the pure scientific space travel sense, but in the anthropological sense. Compare what happens in twenty years today to what happened twenty years in say, Medieval times, and you get the idea. Advances in science and culture occur at a cyclic rate while even a hundred years ago they seemed at a snail's pace.

Americans in particular are affected by this phenomenon more so than their European or Asian counterparts. While 'America' as an idea and a place has existed for less than 300 years, France as a country has existed for nearly four times as long and China has arguably existed nearly four times as long as France. Yet today, we seem to latch onto temporal milestones and anniversaries with zeal that seems trivial when you consider the length of human existence. 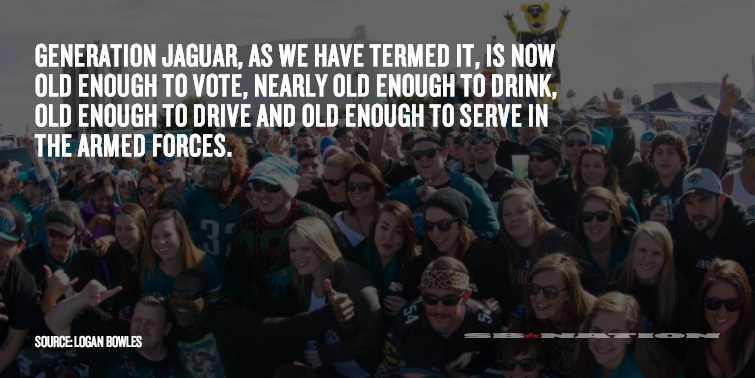 Generation Jaguar, as we have termed it, is now old enough to vote, nearly old enough to drink, old enough to drive and old enough to serve in the Armed Forces. Old enough to hazily remember the Gulf War and young enough to forget that David Hasselhoff once sang on top of the Berlin Wall. For a majority of us, NFL fandom was a tenuous concept to grasp at the inception of the Jaguars. Jacksonville itself is was is a strange sports town. A mixture of humanity from all parts of the country started to move into Jacksonville creating a melange of rooting interests that congealed into a veritable, if not visible, majority of UGA, FSU and Florida fans. Add to that a mixture of random NFL rooting interests and a very confused and diluted set of fans grew in Jacksonville.

You grow up not knowing anything about football except "THAT TEAM GOOD. THAT TEAM BAD." Slowly, you start to learn the rules and then the nuances of the game and some people quit at the rules and never learn the nuances and those people grow up to become sports talk radio hosts. You begin to learn to like the game and slowly you love it and then it dashes your heart into a brick wall and you love it all the same.

Jacksonville slowly began to embrace the Jaguars, strange colors and all. As young grade-schoolers we began to claim the Jaguars and shunned the one asshole that loved the Cowboys despite being from the Northeast. In high school we learned who our good friends were because they let us use their season tickets because we didn't' have any. In our college years we went away and told people to fuck off when they made fun of the Jaguars. You come back home because there is No Place Like Duval™ and then you buy season tickets of your own. You are Generation Jaguar.

You remember relationships as stories with an exposition, rising action, climax, falling action and dénouement but always have trouble latching onto when was what and how it fell into the narrative.

Frankly, let's skip the exposition as we were too young to particularly care or remember about the Jaguars becoming the Jacksonville Jaguars and to be rather honest, all we really remember from those years was Natrone Means because he had a really dope nickname. You always remember the good times in a relationship, vividly, and you can never point to exactly where a relationship goes to shit. You just find yourself alone wondering how it went wrong and how you fucked it all up. You remember going to AFC Championships with regularity, then you remember going to playoffs regularly and then you find yourself outside looking in wondering how it happened so quickly. How you loved that person so much while you were in the good times and how you hated that person when you look back. 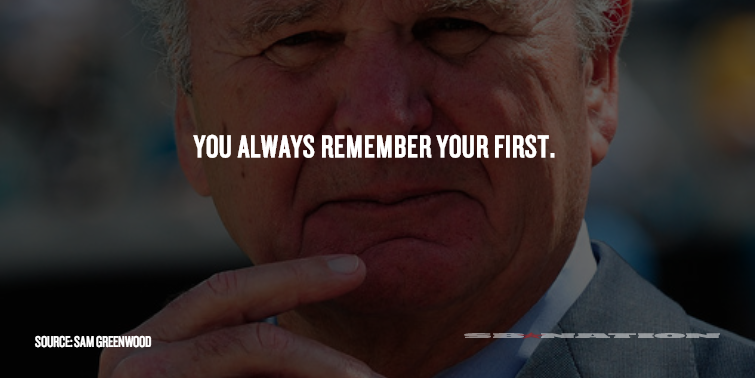 You always remember your first. Wayne Weaver was our first owner. The benevolent father figure that blessed us with the Jaguars and hired Tom Coughlin and led us to the playoffs and then fired him and then hired Jack Del Rio and then made Gene Smith and then you realize that your first wasn't all that special. The shine fades and is replaced by a dull luster. History is never kind and when you're in the thick of things you always think/say that "things will always get better"and that "it'll be just like old times" and it never does and you just become callused and full of regret at the end and then the love you felt becomes anger and resentment. You compare the good and the bad when you look back.

You always remember your first.

Autopsies should be done by third-party so as to not taint the investigation with partiality. Performing one on what you once loved can lead to anger and dejection and tainted results, yet you do it anyway. You look back what was a whirlwind period of lust and love with Tom Coughlin and then face the seemingly long, drawn-out Victorian-era affair that was the Jack Del Rio era and quickly forget the Sadie Hawkins pity-dance that was the Mike Mularkey season, and you wonder if it was you that was crazy and then you realize that it wasn't your fault.

It wasn't your fault. 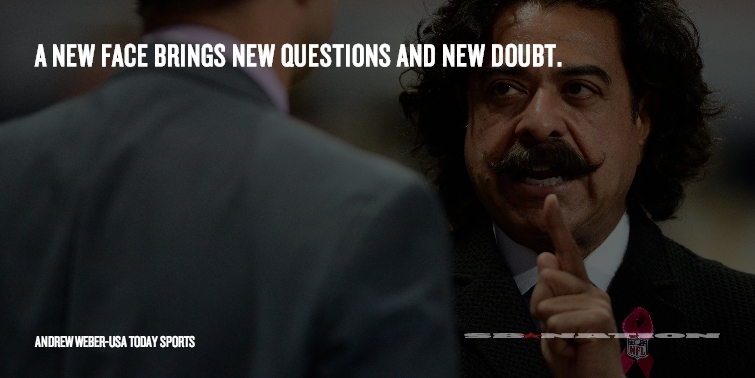 A new face brings new questions and new doubt. Shad Khan has done more to make the Jaguars and Jacksonville relevant, positively, in the first two years of his ownership than Weaver ever did in his last decade of ownership. A man whose life story is literally the American Dream, Khan brings a level of business acumen that was sorely lacking in the latter stages of the Weaver ownership period. But regardless of whatever fiscal changes Khan brings to the Jaguars, he has brought a renewed vitality to a franchise that seemingly handwanked its way to irrelevancy after an initial bout of success.

Cynicism has a strong negative connotation. Supposedly cynicism begets sarcasm begets distrust begets apathy. Yet, cynicism has always been a constant in sports and sports culture. Couple that with the trope that "Hope will always exist" regardless of circumstances and you have the dynamic duo of sports writing defaults. The EASY button of sports writing. It is easy to traffic in Hope and Cynicism, yet hard to traffic in substance. By nature we as a species that traffics in hope and cynicism, often coupling ignorance to fuel either. Such tropes of suspicion and superstition are the confirmation bias and create an ongoing cycle that goes from hope to despair to cynicism to hope to despair forever and ever. It's easy to be cynical about this team. Too easy.

And yet we still live on.

Twenty years has gone by quickly. In the time the Jaguars have existed, Generation Jaguar went to war, came back from war, is still at war, went to college, dabbled around with law school, become successful, lost it all, fell in love, fell out of love, had kids, lived and died. With as much talk as there was by outside sources saying that the Jaguars would move, none of those outlets never highlighted the human cost of a move to Generation Jaguar. For all that has happened on and off the field for us, the Jaguars were always in the background. Twenty years has gone by in an instant, but memories remain. Here's to the next twenty, and the next after that...