JACKSONVILLE JAGUARS FOOTBALL IS BACK Y'ALL. Big Cat Country has the 411 on the game in the 212 against the Eagles of Philly.

Share All sharing options for: Jaguars vs. Eagles 2014: THE BCC PREVIEW EXTRAVAGANZA 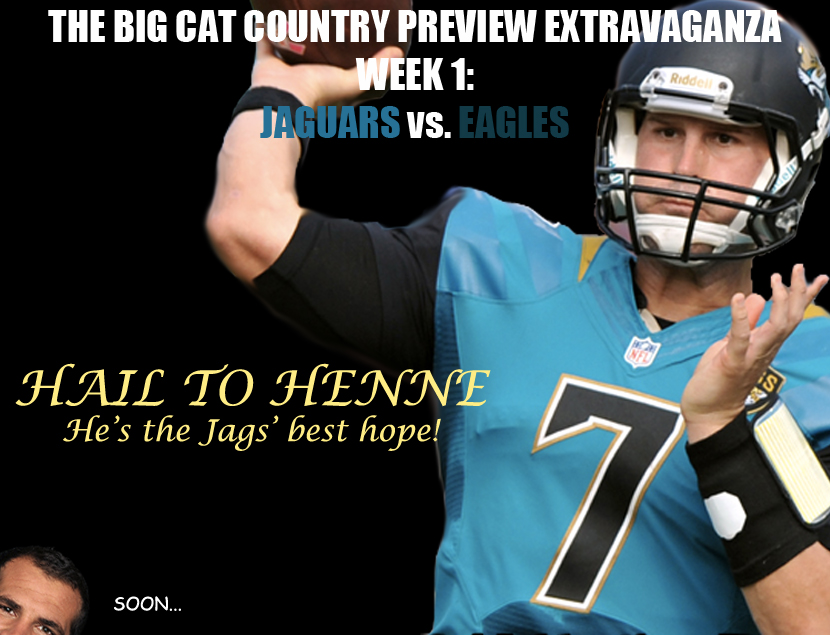 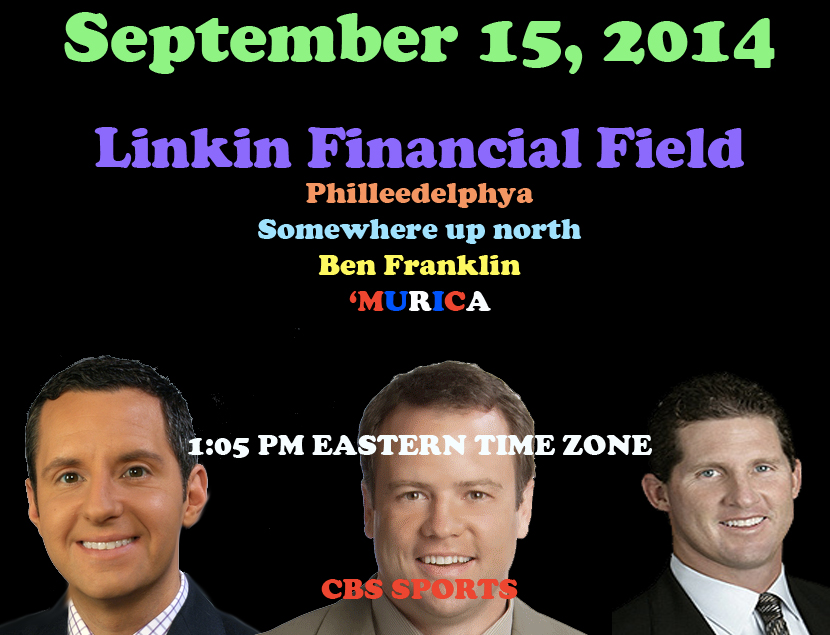 My Days With Chip Kelly

When the Jaguars waltz into Philly this week, they will face a coach who is known to be on the cutting edge of science. Chip Kelly is one of the more creative and enlightened minds that the National Football League has ever seen. Earlier this offseason I was lucky enough to spend a couple of fake days with the Head Spread.

Chip Kelly walked into the lobby of the Holiday Inn in northwestern San Antonio and smiled his trademark grin. "Chaps, how the hell are you?" "Im good, Coach," I replied while still dripping with sweat after I had completed two workouts of the day brought to you by CrossFit. Im a hard worker.

"Here. Wear this." Coach Kelly tossed me a hunter green bracelet that was inscribed with "CaseyArers.com" on the inside. "What’s this?" "That, my friend, is the key to science."

Chip went on to tell me about the myriad of details that this bracelet collects. I gave him my word that I wouldn't give away too much, but just off the top, these bracelets collect:

-what hand you prefer to eat with

-what hand you prefer to wipe with

-what hand you lotion your genitals with

-do you wipe from front to back

-do you wipe from side to side

-how long do you sleep

-how erect are you while you sleep

-how much more erect could you be while you sleep

Chip took the bracelet out of the box and licked the bottom to activate it and slapped it on my wrist. "Coach, did you have to lick it so aggressively." "She never complains." No one knows who she is. I had a feeling it’s was that barista from earlier.

We spent the entire first day just getting to know each other. Lucky for us, there was a international house of pancakes nearby so we spent most of the day eating pancakes. IHOP was Chip’s suggestion, and I would later find out that there was a method to his madness. I had never eaten pancakes for 6 straight hours before. I was so tired after we were finished. Chip suggested that we went back to the hotel and take a nap. I agreed.

After the lights were low, Chip tightened the straps on his visor and sat down in the corner near the television. "Go to sleep, Chap," he said while pulling up the complimentary wifi connection. Chip later told me that he watched me nap for 4 hours. He watched my sleep patterns, dreams, fantasies, and desires. When I finally woke up, we did lunges. Lunges on lunges on lunges. At the end of day, I had done well over 340 lunges. My hammies were absolutely screaming. I was so hungry.

We went back to IHOP. This time for 4 hours. I was so fucking sick of pancakes. I looked at Chip right in his face and said, "what the deal with the pancakes man? This is outrageous."

After a 25 minute drive through the city, Chip pulls into the parking lot at Waffle House. "You serious, coach?" "Do I like everything spread?" Diabolical.

Chip Kelly must have put away 45 waffles. I started to notice a trend. "Coach, I have noticed that you dont put syrup on your waffles or on your pancakes. What’s the deal?" "Syrup slows you down. It’s a fact." Chip pulls out his laptop and connects to the complimentary wifi at the Waffle House. "Chaps, I appreciate you wearing the bracelet today. I can see that you have many near boners. I can see that you were frustrated at the amount of pancakes and waffles. I can see that you were annoyed with my constant flatulence." I wasn't gonna tell you guys about that but for accuracy’s sake…"In order to train harder, you gotta get over that. You cant let the smell of the cheese I ate yesterday get in the way. You have got to be your best. You have got to press through the smells of farts. Have to. That’s what we do in Philly. The city smells like absolute shit but our players dont know. They are focused."

The Jaguars will have a difficult time this week. The Philly players are going to be focused and the smell of the shit that is Chad Henne wont affect them at all.Prediction 29-24 Jaguars.

THE BUBBLE GUYS WHO MADE THE SQUAD!

And they say the first cut is the deepest. Chris Prosinski made the team. So we'll at least get to photoshop him getting hurdled a lot, I guess.

He’s no Chad Henne, that's for sure. He'll get to sit on the bench and watch the master of efficiency at work because the team really likes how efficient Henne has been in the preseason. From his efficient short passes to barely move the team to his efficient welp hand all the way to his efficient ability to produce field goals. Hopefully Bortles knows how to learn efficiently.

The LEO end based out of Holland, hence the nickname "windmill" will once again extend his wisdom on the field. He'll try to get to the Eagles quarterback, former action star Axel Foley, and hope that the team can really prevent the Foley from getting the Eagles out of whatever hijinks they find themselves.

After Axel got revenge for Douglas Todd in Beverly Hills Cop 3 by killing Ellis Dewald, he's been trying to find work. Luckily Eagles head coach Chip Kelly is a big fan of the Beverly Hills Cop series, though some sources seem to indicate he much prefers 48 Hours.

The former Missouri Tigers running back will be one to pay attention to on Sunday. He's got speed for days and just one crease can see him in the end zone. He blew his knees up a few times in college, but busted his ass and made it back and is now in the Eagles starting lineup. Hold on, I just got a Jaguars ESPN alert. BRB.

The Jaguars offense is going to be efficient Sunday against the Eagles so be sure to pay attention to how efficient the efficient Chad Henne is while efficiently being under center. When he efficiently checks it down on third and long, be sure not to yell GOD DAMMMIIIIIITTTTTTT for too long, because as you can see that wasn't an efficient use of the letter "T".

How are the Jaguars going to use their fifth-round pick? That's never really been a question asked by many, but this year there are so many options for the team's "Offensive Weapon." Will he be used on special teams? As a running back? As a receiver? As a passer? At all?

The Jaguars have given him a little bit of everything in preseason, but you shouldn't be surprised at all if Jedd Fisch had some tricks up his sleeve for the regular season. I'm ready.

I honestly just left this above portion from the Week 1 preview of last year. It's applicable.

Philadelphia. The city of Brother Love. Home to the Liberty Bowl. The city of such wonderful sports franchises as the Yankees, Rockets, and Eagles! Bad sports town? FUGGGGGHEDABOUTID!

What is there to do in Philly? Well, assuming you have all your immunizations in order, you can visit Independence Hall, the place where a bunch of old men decided slavery was bad, but ok at the same time!

Next, you can have yourself a cheesesteak, a hunk of cheese cut into the shape of a steak and then grilled to gooey perfection. Wow Yankees are weird!

Finally, assuming that you are still alive and have not been mugged, you can race to the airport before the nighttime curfew goes into effect, trapping you in the hellhole that is the City of Brother Love.

2. We score a touchdown. Hell, let's go wild and score more than one!