How far away are the Jaguars from a Super Bowl?

The Jacksonville Jaguars are undergoing a rebuilding process, but how long will it take to win the ultimate prize?

Share All sharing options for: How far away are the Jaguars from a Super Bowl?

The Seattle Seahawks and the New England Patriots are set to face off in the Super Bowl on Sunday, that is in case you forgot between all the coverage of Marshawn Lynch not talking to talking about PSI levels in a football. This has made a lot of people wonder how far away their team is from not just making the Super Bowl, but winning it.

ESPN and Pro Football Focus decided to look at see how many missing pieces each team had going forward and the Jaguars rank much lower than I thought they would.

Based on their methodology, they ranked teams by the percentage of "good/elite" players on the roster and the Jaguars ended up 30th overall, which is dead last. 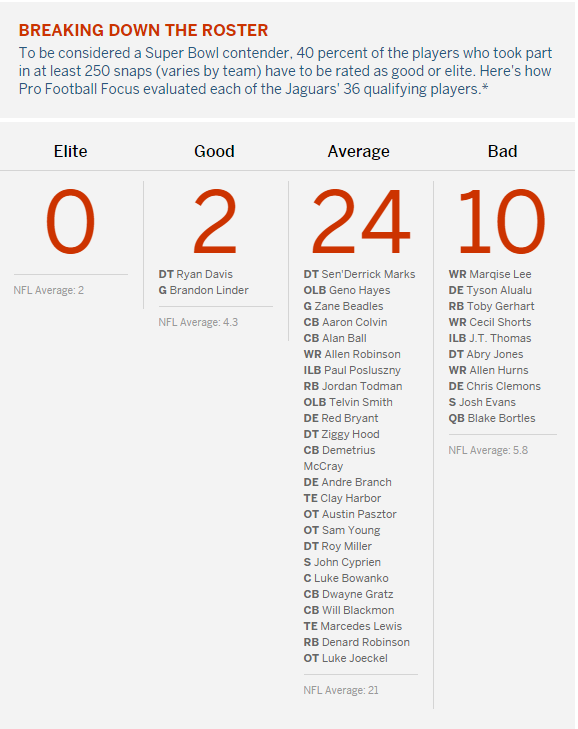 While their results and rankings might send you into a sense of dread and feeling that the Jaguars will never make it, there are some issues with how these rankings are done. The different slots are based on their PFF grades, which already sends this a bit out of whack because those are a bit wonky depending on how much stock you put into them.

For instance, Sen'Derrick Marks is ranked as an average NFL player and I'd easily argue he should be on the "good" range. He was a Pro Bowl alternate, while on a 3-13 team in Jacksonville. Next as much as I like Ryan Davis, I'm not sure I'd have him in the "good" category, as he's mostly a role player on the defensive side of the ball.

A good thing about this list however is that there are a lot of young "average" players for the Jaguars, which means they can still grow into good or elite level players, based on these slotting situations.

What do you think? How far away are the Jaguars?

For your Super Bowl tickets, visit the NFL Ticket Exchange.