Looking at more of the top LEO prospects in the 2015 draft, and how they fit with Jax, continuing with one of Florida's own, Dante Fowler Jr.

The player that is most mocked to the Jaguars at this point has to be Dante Fowler Jr. And it does make sense. He is from UF, plays with the temperament you know Gus Bradley would love, fills a big need, and had an above average showing at the combine, But like nearly every other Edge Rusher in this class, the opinions on the former Florida Gator range wildly. The positives on him range from his size/athleticism combo and his on field intensity that leaves many fans drooling at the prospect of Fowler joining their team, but there are also a lot of questions surrounding Fowler's on field play.

Fowler has prototypical LEO size at 261 lbs, and unlike Ray/Gregory (and Vic Beasley) there should be no worries about him playing with his hand in the dirt on every down.

Skillset wise, Fowler offers a lot of desirable traits, but his ability as a true Edge Rusher is bit of a projection.

Fowler has most of the traits you look for in a Pass Rusher: Bend, strength, explosion, length. But what he put on tape is ultimately a mixed bag.

Where he wins the most as a player right now is in 2 areas: Inside moves and Interior blitzes.

Fowler's favorite move is an inside move and it's pretty clear why. Against slower footed OT's who are scared of his outside speed, it is almost always open, and it is ultimately the shortest route to the QB.

Here is one of Fowler's best inside moves.

Fowler shoots outside and his chest/head both indicate he is going to continue to attack the RT's outside shoulder. Fowler gets enough vertical depth to make the RT overset and open up space to his inside, and that is all she wrote.

Fowler is not the best athlete, but at 265 +lbs, his short area agility is surprising, and he shows it there. A lot of inside moves fail because the DE either is too slow to shoot inside or tips off the move from the start. Here, Fowler did neither, and it resulted in a Pressure/QB Hit.

Fowler uses his inside move to make impact plays vs the run too, which is ideal if he is lined up in the Edge Setting OTTO role.

An inside move is something Fowler showed over and over again. It is his best move as an Edge Rusher. With this said, this was not where Fowler shined the most.

If Fowler's college tape says anything, it is that Fowler lands in a creative scheme, he can flourish. Thankfully for Fowler, UF obliged to this fact and made him a chess piece to move all over the field to create favorable mismatches.

And that is all football is really about. Whether you are a Pass Rusher, a DB, a TE, Whatever, you want to be able to create mismatches. And if used similarly to how he was at UF, Fowler will be a walking mismatch.

Where Fowler is a mismatch at his when he is lined up as a standing blitzer from C gap to C gap. As an edge rusher, he is a good athlete but not a special one, and a lot of OT's can match up with him athletically. Here is an example of how he gives slower interior OL issues. (Standing up vs the RG)

Most IOL expect to make a quick pass set and anchor in a phone booth on pass plays. Unlike OT's, they are not comfortable taking on DL who have a running start and who can change directions at rapid speed. This is why Fowler is such a good blitzer. His first step goes from good on the edge to great inside. His experience working back inside helps his take advantage of small gaps in the OL, and his length/quickness help him create and attack space.

Here is a play where Fowler gets schemed into pressure, but that isn't a negative because he is athletic enough to take advantage of such a play. This blitz is also very similar to Bradley's favorite blitz call, opening up the A gap for a stunting LEO.

His speed and quickness in a phone booth is just a complete nightmare for most OL, and he has the size and strength to avoid getting overpowered in the process

Now, while everything on Fowler looks all nice and good, I have a lot of reserves about him. As athletic as he is, he just isn't a very good Edge Rusher at this point, and a lot of the things he does makes me question if he can ever develop into one. \

This play is one of those, and quite frankly just confused me.

You see Fowler shoot for the edge, and honestly if he ripped his arm though and got under the OT, I think he would've won it and got past him. But as soon as he gets the OT to set, he tries to shoot back inside.

This is the same OT Fowler killed with inside moves earlier in the game, so the OT was prepared for it. And once the OT mirrored him, Fowler's rush was a failure. This shows that Fowler, despite all his good traits and appealing play style, has little clue what he is doing as a pass rusher. He is over reliant on an inside move because at the College level, nearly every OT is scared of his speed. He uses it so much that he doesn't really know how to win the edge, and this is an issue because there will be a lot less of those inside opportunities at the next level.

Here is a rush vs the same OT that makes me question Fowler's edge rushing ability.

Fowler simply gives himself no chance here. He tries so hard to fake out the OT to try to create some space inside that he wastes an entire rush. As a rusher, you have to do everything quickly and with a purpose. The ball is typically out of the QB's hands in close to 3 seconds, and if you rush the way Fowler did on this play, you will never get near him.

This final play is the one that, out of all of Fowler's rushes, was the most eye opening to me, good or bad.

Right here, Fowler should rip through with his left arm and dip under the OT. 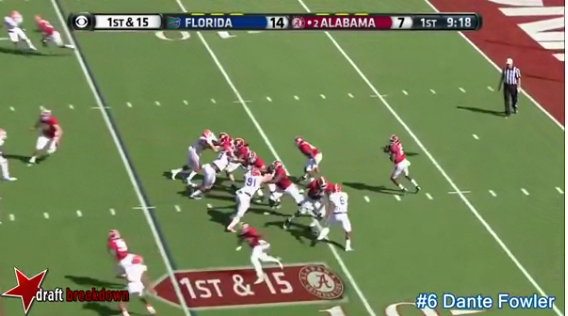 But instead, he stops dead in his tracks and tries to set up the OT for an inside move, getting himself blocked in the process. 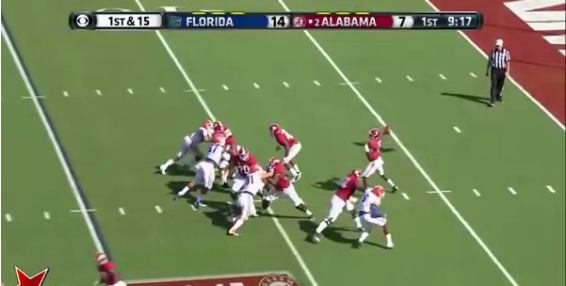 Fowler had a clear opportunity to rip through the OT and win the edge, and likely get a sack. But he actually shied away from it, and just got himself blocked. Why? Can he not do it, or does he just have no idea what he is doing?

Plays like the one below make me believe it is mostly the latter.

Out of 5 games I watched of Fowler, that is the ONLY time he ripped and dipped under the OT to win the edge. So I know he CAN do it, he just doesn't really know how to.

The Jaguars haven't really had a player like Fowler on their roster under Bradley's staff, so it's hard to make a true roster comparison for him. He fits their LEO build almost to a tee, but also represents the ability to be shifted around the alignment as an interior blitzer.

In a way, Fowler is a bit of a tweener. As a full time LEO, I have my reserves on whether or not he can be a constant edge rushing threat. It would also restrict him from perhaps his biggest selling point; Versatility. If lined up at OTTO opposed to LEO, the scheme could create more favorable mismatches more Fowler as he could be moved around the formation more, similar to how UF used him. I think he can be serviceable OLB but he isn't really a player you want flipping his hips and running, so it is best to keep him on the line as much as possible.

Ultimately, Fowler would offer an upgrade over Andre Branch (lol) on the roster as the #2 LEO. Having him as a backup to Clemmons, or another LEO in the future, would allow Fowler to be moved around the formation and utilize his skill set vs slower interior lineman, something Jax's scheme has opened up Branch for in the past 2 seasons.

Fowler fits Jax in terms of on field temperament, energy, and just overall passion. He is a big, athletic, violent player, and I fully expect him to be high on Jax's wishlist. If I HAD to make a guess who will be the #3 pick right now, it'd be Fowler. I have my doubts he can be a true bona fide LEO starter, but I think Jax's scheme would open up the opportunities he needs to produce, just as they have done for Branch, Ryan Davis, etc

This does bother me in a sense though, because once Clemmons retires, it would just open up a need for a #1 LEO again, unless Gus Bradley and Todd Wash worked magic on Fowler year 1. Which isn't out of the question, but personally, I'd shy away from Fowler in Jax's situation, despite the Fit.