Looking at more of the top LEO prospects in the 2015 draft, and how they fit with Jax, continuing with Kentucky OLD/DE Bud Dupree.

Kentucky OLD/DE Bud Dupree isn't a player who has really been linked to the Jaguars often at this point, but he has been the quickest rising Edge Rusher since the end of season, due to a freak combine showing and more people going through his tape. The consensus on Dupree is that he is among the rawest of the Edge Class, but his upside is almost unparalleled.

Dupree stands at 6'4" and 269 lbs, so NFL size isn't really a concern with him, and his arms were less than half an inch below the LEO threshold, so there is no issue there either. Dupree didn't participate in any agility drills at the combine, but he posted incredible numbers in the other workouts. He had a 1.610 yard split in his 40, as well as hitting the LEO benchmarks in Vertical (42"!!!!) and Broad Jump (138")

To see just how impressive those marks are, look at this graph from Mockdraftable.com that compares Dupree's numbers to past combine peformances. 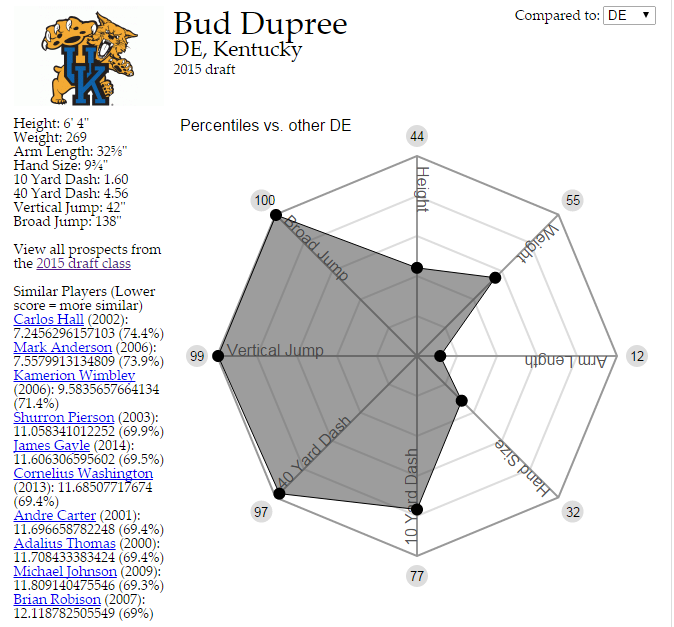 As a player, Dupree falls well behind Gregory/Fowler/Beasley, at least where he is in his development right now.

Dupree was asked to play a lot of roles at Kentucky, from stand up OLB who played contain or covered the flats in pass coverage, to blitzing LB, to 4-3 DE with his hand in the dirt. 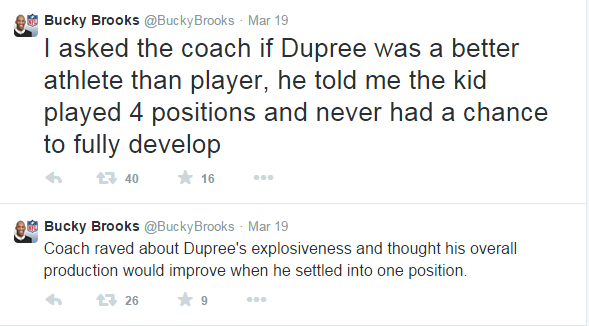 When a player is asked to handle a lot of responsibilities and separate roles before he has ever even settled into one, it should be expected for the player to be raw overall, which is the case for Dupree. As a college player, he was valuable to his team because he handled so many roles, but as an NFL player Dupree is going to make his impact as a pass rusher first and foremost, and he will need a lot of development before that happens, because he was never really allowed to focus on his ability as a rusher at Kentucky.

Right now, Dupree is a moldable clay with a very specific skillset. It is easy to see what Dupree can bring to the table from day 1 and what traits his development will be centered around. Dupree posted insane explosion numbers at the combine, and this form of athleticism is evident on film.

This is early in the 2014 season vs UF, and the first successful Edge Rush I saw from Dupree in my 5 game study.

This pass rush was pretty simple, and it highlights where Dupree is going to win in the NFL. No rush moves, just pure explosion to shoot past the OT and then the strength to not get pushed out of his rush lane.

With Dante Fowler I talked about how athletic pass rushers should be able to capitalize whenever given open space, and Dupree checks this box as well. He is able to use his explosion to shoot through gaps left vacant by the OT and close on the QB with closing speed that is rare for 265+ lb defenders.

Did Dupree create this pressure on his own? No, it was created because of a lapse in the protection set by the right side of the OL, but that shouldn't be a slight to Dupree. There will be broken plays in the NFL. The question is if you capable of turning these broken plays into production. Dupree certainly is.

But, despite elite explosion, Dupree can't run around every OT he faces. This isn't just a projection either, because he couldn't do it in College.

One thing that is consistent with Dupree's film is that you will see more missed opportunities as a pass rusher than you will see true "Wins." You will see his athleticism create clear chances to get to the QB, but for a multitude of reasons, he just struggles to close the deal.

Here is an example.

Dupree clearly wins the edge vs the OT, but he gets completely washed out of the play. What went wrong?

Well, Dupree's fatal flaw as a player is pretty clear and simple. He can't bend. He's not Andre Branch stiff, but I didn't see one time where he dipped and run a tight arc around the edge. For comparisons sake, Dante Fowler rarely did on tape as well. But there were instances where Fowler showed he could do it, he just didn't really know how. For Dupree, it is a mix of both issues. He doesn't know how to lower his shoulder and rip past the OT, and frankly I'm not positive he can.

This is a constant occurrence with Dupree. Every game, there were at least 4-5+ occurrences where Dupree missed out on a sack because he can't bend the edge.

It's not even just because of his stiffness, either. It is in large part due to bad technique. Dupree should be lowering his shoulder/pad level when he gets around the corner, but instead he frequently stands up, taking away his balance/power and making it easy for OT's to push him out of the arc.

This is probably the best example of Dupree not being able to win the edge because of poor technique.

Right here is where Dupree should rip his right arm through the OT and power through towards the QB. If he does, it looks like an easy sack. 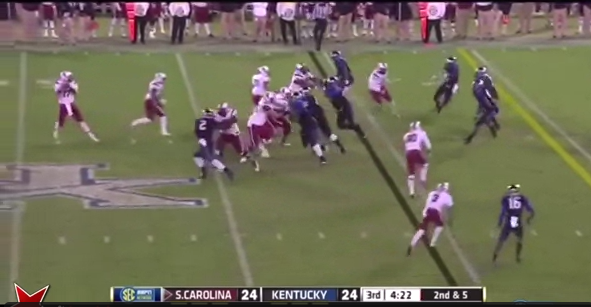 Instead, Dupree tries to take a wider arc to get the OT out of his frame. He separates from the OT by the end of the rush, but because he took the longer path, he misses out on a sack. This is where a coach will need to work with Dupree. Dupree has laid the foundation of his ability with his athleticism, but too many times he can't cash in on the opportunities his speed creates because of poor technique.

A lack of bend and rip technique is the biggest thing stopping Dupree from being a consistent pass rusher, but he has shown pass rushing promise aside from his athleticism regardless.

This play came later in Kentucky's season, and showed pass rushing ability that Dupree had rarely displayed before.

This is Dupree understanding the space his speed creates. The OT is dead set on getting to the edge to stop Dupree's speed rush, and Dupree does a really nice job selling it. As soon as the OT turns his hips to the point of no return, Dupree uses his quickness to come back inside and make the OT look foolish.

Here is a play that I think is one that shows what Dupree could do as a LEO in Jacksonville's scheme.

Dupree is lined up wide and shoots for the OT's outside shoulder. This creates a TON of space inside, which Dupree takes advantage of, leading to him forcing the QB out of the pocket.

Dupree has a lot of issues. He is stiff and has lapses in technique. But in Jax's scheme, this is less of an issue because being lined up wide at LEO every play would give him more and more chances to take advantage of inside gaps.

Dupree needs a lot of work, but I don't see anything to make me think he is unfixable. He improved even throughout the 2014 season. You will likely not get immediate production out of him, but I do not think he is too far away.

Like I mentioned above, Dupree is a great scheme fit with Jax. He has special traits as a hand in the dirt DE, and being lind out wide is his best chance to be productive. He is less valuable when moved around, but he could also function as a Stand up SLB/OTTO.

Long term, he could be a replacement to Chris Clemons. By all accounts, Clemmons is expected to make the team in 2015, no matter who they draft. This is likely to make sure the rookie LEO doesn't have unreasonable expectations year one and can grow as a player before he enters a bigger role. This is ideal for a player like Dupree, and is why I would be comfortable with him as the selection, be it at #3 or in a trade down.

Dupree is a leap of a faith as a player, but I believe in his traits and the favorable situation in Jax enough to optimistic about him.