Looking at more of the top LEO prospects in the 2015 draft, and how they fit with Jax, concluding with Clemson DE/OLB Vic Beasley.

Vic Beasley and the LEO position go together about as well as spaghetti and meatballs. Or Shad Khan and great hair. As of right now, he is the player that makes the most sense for the Jaguars at 3. It is one of those rare occurrences where need meets value, production, scheme fit, and talent. But why is that?

Simply put, Beasley destroyed the combine. Nobody answered as many questions as he did, because he came in at an increased weight (245 lbs) but still maintained his freak level athleticism. He passe every single LEO Benchmark other than Arm Length, but he was only half an inch off, so who cares. 1.59 10 yard split, 6.91 3 cone, 4.15 shuttle, 44" vert, and a 130" broad jump. My word.

A common trend among this years Edge Group is that most of the prospects play to their combine performances. Bud Dupree has freak Explosion. Dante Fowler is just an OK athlete. Gregory is a freak. And Shane Ray has the agility of a common house turtle. The same goes for Beasley. He destroyed the explosion and agility drills, and this shows up in his game as well.

This play is a good example of how Beasley’s athleticism translates to the field. You can see how wide of an arc he has to run the QB, but his quickness is so overwhelming that he covers ground in no time.

The fluidity and comfort in space his agility drills suggest he possesses checks out as well. This play specifically is one that makes me think he can function as a 4-3 SLB. He doesn’t impact the play, but just look how he moves in space. This is what separates him from Ray/Fowler/Dupree.

But, possessing freak athleticism is only 1 part of the equation to becoming a successful pass rusher. You can be the biggest and fastest player on the field, but if you don’t know what you’re doing when rushing the passer, it is a lost cause. A good recent example is Dion Jordan. Most considered him an elite athlete and anticipated this translating into good pass rushing skill, but Jordan was never more than an average pass rusher, and his NFL play has proven this. He lacked the intensity and instincts that is needed to win as a rusher. Vic Beasley does not.

If I had to describe Beasley as a pass rusher with just 1 word, it would be intelligent. He matches his physical traits with an obvious understanding of the nuances of the position. The reason this can be inferred is by how Beasley’s approach to his pass rush changes over the course of each game. It’s almost like he is a boxer using the early rounds as a feeling out period, just so he knows where he can hit, and when.

Beasley’s go to move is a speed rush with a rip/dip around the corner, and it’s something that is highly successful for him because, along with his athleticism, he knows how to beat OT’s with technique.

This play is against FSU OT/C Cameron Erving, an OT who Beasley was very up and down with over their battles with each other.

Erving is not what I would consider a good OT. Frankly, before he switched to Center, which he is VERY good at, I wasn’t really sure I’d invest a pick on him. But what he does offer is a big frame, long arms, and brute strength. Contrary to popular believe, the bigger/stronger OT’s who are typically slower are harder for DE’s to beat. This is because it is hard for DE’s to just run right by them because they are big enough to make it difficult to run the arc, and they can use their length/strength to push the DE out of the play.

This is something Erving did to Beasley. A lot. But instead of just keep coming at Erving with the same move over and over again and hoping he’d get lucky, Beasley switched up his approach. He improved over the course of the game. In a sport where a lot of players don’t improve throughout the entire course of their career, Beasley is a rare case, and a refreshing one.

Why is this so different from a regular speed rush? What did he do different? Well, it was a small adjustment, but it made all the difference. 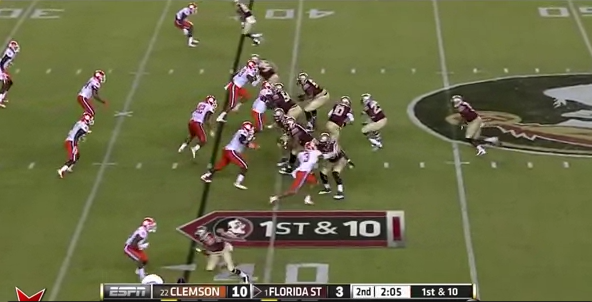 Look at Beasley and how he approaches the edge rush. He isn’t trying to just run by Erving, because he knows it wouldn’t work. Instead, he sets up to keep Erving out of his frame before Erving can use his length. By taking away Erving’s biggest strength, Beasley can use his.

Now don’t get me wrong. Vic can still win with a speed rush. His biggest strengths as a rusher are his explosion and ability to bend with a low center of gravity to get to the QB (Something I noted Dupree and Fowler can’t really do.)

The number of ways Vic can win as a pass rusher is downright special.

He can win by faking to the outside and then shooting insde.

He can win with hand usage and his upper body strength.

He wins by shooting inside off the snap and chasing down QB’s with his motor and speed.

He wins by making OL look silly in space.

He can win with lightning quick spin moves.

He can win by making an OT look embarrassed. Like a JV backup. He can make the OT look like he’s playing a completely different sport. Or maybe he’s playing the same sport, just nowhere near the same level as Vic.

You know the plays. The ones where a guy gets beat so bad, that if he is one of yours, you can do nothing but put your head down and feel sorry for him, yourself, and the guy he got killed. As Jag fans, I think we have felt that a lot. We haven’t had a guy who can do it to the other teams though. I think Vic can be that guy.

Tell me right now you don’t feel sorry for this OT Vic beats up on. This is what dominance looks like. This is being better than everyone else on the field.

One of the people I respect the most in the evaluation industry is Sigmund Bloom of Footballguys.com (@SigmundBloom) and he described the play above to me like this: "Some of the best moments watching tape are when you feel sorry for a guy's opponent. only a select few can do that."

Vic manages to do this on a regular basis. I don’t need to go through each and every single rush and give a detailed explanation on why it worked. It is easy to see why. He is just better than every player he has gone against. He is dominant. Not a lot more that needs to be said.

The Jaguars have no player like Beasley on the roster. He can play both LEO and OTTO at an incredibly high level, and he would be the best athlete on the defense from the first day he steps on the field.

I think he could play a Bruce Irvin type role with Jax, alternating between the two spots. I could also see him as a true LEO on each down. Wherever he plays, he would be the teams best pass rusher and fills both short and long term needs.

Vic fits more than any other play in the draft. He fits the need, the style, the production, the athleticism, etc. Everything Jax needs, Beasley has.

Will he be the pick? I have no idea, and won't pretend like I have one.

But he should be.