Looking at the top LEO prospects in the 2015 draft, and how they fit with Jax, starting with Missouri's Shane Ray.

By most accounts, the Jaguars are bound to walk away from the first round of the 2015 draft with a Defensive Lineman, be it a versatile DL like Leonard Williams, or one of the many LEO's projected to go high in the draft.

While nothing is written in stone, DL is the only clear direction for Jax to go in the first round this year, as things currently stand. Unlike the last 2 years, there are not a ton of immediate needs that suggest Jax could go in any direction. The logic behind this years draft is that with a QB, young WR's, and a recent #2 overall pick in Luke Joeckel, that going DL is the next step. This makes sense both from a needs and value standpoint, as several of the top players in this years draft class play along the DL, and the Jaguars have a clear need at LEO specifically because they have no clear future at the position, and Chris Clemons is on the tail end of his career at 33 years old.

First off, it will probably be best to describe what a LEO is and illustrate what his role is, because there seems to be some confusion over the term the last few years.

Here is how Gus Bradley defines a LEO: ""He needs the ability to be a great pass rusher. You're looking for a traditional right end but with great speed and get off."

Eric Stoner wrote this piece on the Jaguars defense around the time that Bradley was hired that goes more in depth of what the LEO is and it's responsibilities.

"The Leo isn't particularly unique in and of itself. Most defenses have some kind of unique name for their weakside edge player (Buck/Whip/Jack), but Carroll plays him in a particularly loose alignment, and he's the one player along the front who isn't concerned with getting one-yard upfield and anchoring in this defense. He can line up standing up or with his hand in the ground, and sole focus is to be the primary pass rusher and wreak havoc in the backfield."

And finally, Pete Carroll, whose defense Jacksonville's is largely based and where Bradley got the LEO from,describes the LEO as "It's a position that can take on different sizes and shapes, but it is a spot - a little bit of a hybrid position - that is kind of a linebacker, kind of a defensive end," Carroll said. "We picture it as a speed-oriented guy."

TL;DR: The Jaguars value explosion and length in a LEO, preferably want them weighing around 255>, and ideally he is a player that thrives at playing in space.

Among the LEO's in the draft, I think there are 5 or so that could be in play for Jax, be it at #3 or pending a trade down. I don't include Leonard Williams in this, because he is more of a natural SDE. The LEO's I narrow it down to are; Randy Gregory, Dante Fowler, Shane Ray, Bud Dupree, and Vic Beasley. There are other players that could be considered, like Eli Harold and Nate Orchard, but these are the 5 I expect to be drafted the highest.

So with so many LEO types projected to go so highly this year, who is the best fit for Jax?

Ray's draft stock seems really unpredictable at this point in the process. He was a riser throughout the season due to his impressive production (13 sacks, 22.5 TFL) and SEC pedigree. Since the end of the year though, Ray has been banged up (foot injury in the bowl game) which prevented him from participating in the combine, and right now there are more questions than answers on Ray.

To go more in depth in the LEO measurable benchmarks, here is something Alfie Crow wrote post combine to put it into more perspective.

Ray is the only of the 5 LEO's whose combine #'s we do not have on hand, but he is testing at his pro day, so some clarity can be offered there. From a measurement standpoint though, we can see Ray has the length to pass the LEO threshold (33 ⅛) but his size is troubling, at only 245 lbs. This is more so the size for an OLB, but Ray's skill set doesn't match with that at all. Ray can be expected to add weight when he gets to the NFL, but his frame is a unique one, to put it.

And this will sound like nitpicking, but I was personally shocked to see Ray's arms are over 33". He does not play or look like it, but can't really argue with official measurements.

What Ray offers in terms of skill set is much clearer than any of his athletic testing or measurable.

When it comes down to passing the rusher, it isn't exactly a science. It is not an intricate art that requires perfection in every aspect. A lot of times, a rusher makes an impact because of 1 of 2 things: His get off, and his motor. Luckily for Ray, these are both probably his best attributes.

If Ray succeeds in the NFL, I believe it will be almost entirely due to his burst off the ball. A good first step does so much for a pass rusher, especially one like Ray where he does not have much else to offer in terms of strength/technique. It is Ray's bread and butter, and he knows it.

A good first step can kill an OT. Not on every snap obviously, but it is almost like chipping away at something until it finally cracks. With each good first step, Ray plants a sense of paranoia into the OT's mind, affecting his pass set on a play to play basis. Eventually, the OT will be so scared of Ray's speed rush that he will slip up, giving Ray the small glimmer of space that he needs.

This play is a good example.

I would not say Ray had a good game vs UCF. Most of his plays came late in the game and early on, the LT was doing more than holding his own. But on this play, the OT's approach changed considerably. No longer did Ray have to wonder "Rush or play the run." Mizzou was up 2 scores in the 4th Quarter. He knew the pass was coming, and so did the OT. That is why the OT's pass set looked like this. 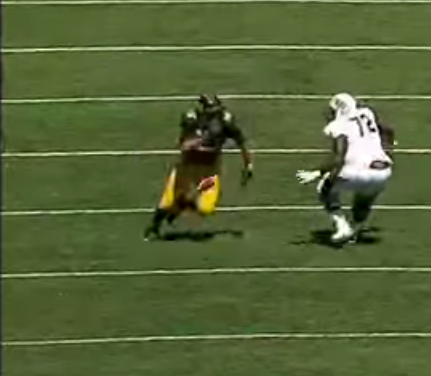 With the run threat gone, the OT was in full panic mode. He was literally back pedaling to try to gain ground vs Ray, because he knew the speed was coming. And Ray has the speed to turn any opportunity like this into a play.

So essentially what it looks like I am saying is that Ray is only really effective late in games or in obvious pass situations. Well, that honestly is the kind of player Ray is. He is much more of a "Closer" than he is anything else. If he knows no run, he is a terror to block. But there are just so a limited # of those situations on a game to game basis.

If you want to see what an early game rush attempt from Ray looks like, this is what you get in most cases.

Ray does have some redeeming qualities though, namely his motor. When I say Ray has a motor, it doesn't just mean he goes 100% the entire rush, but I also mean he is instinctively looking for the QB throughout the rush. Ray looks for any opening he can, and due to his burst he can take full advantage in most cases.

Initially, this Sack looks like Ray was simply in the right place at the right time, and that isn't entirely untrue.

This angle does a better job demonstrating how Ray's motor and awareness produce plays. He does not beat the OT on the initial rush, but he knows the depth of the QB's pocket. As soon as he sees the pocket open for the QB to step up, he presses the OT to give himself an opening to the inside, then shoots over and cuts the QB off. He didn't technically create the pressure, but he saw an opening and made a play due to his instincts and motor.

An added plus to Ray is that he offers some versatility, but not the kind you expect from a 245 lb rusher.

Something Jax likes to do with it's DE's is to stunt them inside for nearly free sacks (The Andre Branch Special) or in Ryan Davis' case, line them up inside on passing downs. Like Davis, Ray is smaller than your typical Nickel DT, but his athleticism creates easy pressure.

A new ideology I am going into this draft season with is looking at players more from a Jax specific view than a league wide view. Instead of placing Round Grades/Values, I instead ask how a player fits with Jax, and who on the 53 man roster he is replacing.

So instead of saying "We need a pass rusher. Ray has a first round grade, lets take him." I look at it more like "Who does Ray replace on our roster, and how valuable is the upgrade?"

I made a Ryan Davis comparison above, and I think that is the most logical explanation for who Ray would replace. He offers similar athleticism and inside/out versatility.

Now, I know I am higher on Davis than most, but I do not think Ray can offer much more than he does. Ray has a higher ceiling, but Davis is polished and productive. Ray could offer a slight upgrade, but is a slight upgrade over a #2/3 DE/Nickel DT worth the #3 pick?

Another point is where exactly would Ray play. His size indicates an OLB off the LOS, and he has gone to say that is what he believes as well as well. But the thing is, he doesn't really  have any OLB qualities. He isn't a player you want reading plays and reacting in space. You want him moving forward 24/7.  He has some LEO traits, but I'm not convinced he can play it full time with his style/size, but he may not have a choice.

Ultimately, Ray offers some things that could entice Jax, such as his energy, explosion, and versatility. But as of right now I would not call him a fit for the Jaguars at the top of the draft b/c he is a tweener who doesn't match their physical traits, and he doesn't offer a major upgrade anywhere on the roster.