Looking at more of the top LEO prospects in the 2015 draft, and how they fit with Jax, continuing with Nebraska's Randy Gregory.

Nebraska Pass Rusher Randy Gregory's draft stock has been all over the place the last year or so. Every preseason, there is that one freak edge rusher who gets highly touted but ends up "Falling" because he fails to meet unfair expectations. Gregory seems to be 2015's victim to this cycle, as in a matter of a months he has gone from unanimous top 5 pick to fringe top 15.

Gregory didn't perform in enough combine drills to be ran through the entire LEO benchmarks, but there is enough information to draw some conclusions.

First off, Gregory's weight. It was a hot topic at the combine, before the combine, and ill likely be one all the way until May. And this is a warranted critique. Many noted at the combine he looked more like a WR than a DE, and him weighing in at 235 lbs is concerning. He did try to downplay it by claiming he was sick and lost weight before the combine, but regardless he needs to add way more onto his frame. Right now he is at OLB size, but unlike Ray he actually has the skillset to thrive there, so it is not as huge of a concern as you'd think, but he needs to get bigger regardless.

Gregory didn't perform the agility drills, but he isn't a player who really needed to. What he did do at the combine is pass every other LEO benchmark, outside of weight.

Like Ray, Gregory wins with some very specific traits, but overall has a much more diverse skillset. These traits include technique and athleticism.

I am not going to go on and on and on about how athletic Gregory is. He is a freak. One of the most natural movers I've ever seen. This should say it all.

One thing that sets Gregory apart from Ray, and others in the EDGE class is his freakish Speed-Power transition. He played sub 250 lbs, but shows great technique and power when rushing OT's head on.

He wins this rush due to leverage and technique. He hits the OT right in the chest and maintains hand placement, along with leg drive. He has enough power that when he get sunder the OT's pads, he is too powerful and too quick for the OT to do much. 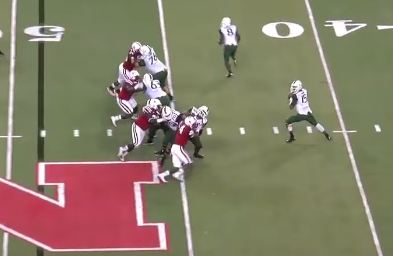 That was against Ereck Flowers, a projected top 50 pick who has roughly 100 lbs on him. Gregory has a smaller frame, but by no means does he play small, at least not when rushing the passer.

Ray can win in other ways aside from bull rushing and with his quickness. He has shown the ability to shed blockers with advanced hand technique.

He plays the PA option by locking out the OT with his length and finding the ball. As soon as the OT sets outside, Gregory swipes his hands in a lighting fast motion and is able to shoot inside. When you can combine hand use with elite Athleticism, you will generally get good results.

One caveat on Gregory that should be addressed is the matter of his "get off." Gregory has been cited as having a slow one, and there are a lot of examples that help back this. But ultimately, this was all due to Nebraska's scheme. 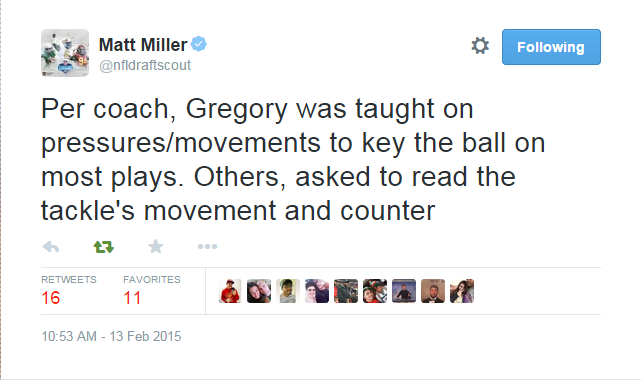 When Gregory is able to pin his ears back, he flies past OT's. If that doesn't do it for you, his explosion #'s at the combine show he is an explosive athlete at the NFL level.

Using the same philosophy with Gregory that I did with Ray, the value he would bring to the Jags defense is clear. He would be a long term replacement for Chris Clemons, and a short term replacement for Andre Branch. He offers the combination of dynamic athleticism and pass rush traits that no other defender on the Jags DL offers.

Due to the presence of Clemons, Gregory can be Redshirted in a form during his rookie year, but could also play some OLB on base downs due to his comfortability in space and quickness. He ultimately would give the defense a chess piece that can be moved around on a down to down basis, or simply serve as a 3rd down specialist.

While I see Shane Ray as a type of "Closer" Pass Rusher, Gregory would be the Ace who throws 8 innings. He can bring the pressure on any given down, either from LEO or blitzing from OLB, and ultimately just offers a much more diverse and intriguing skillset.