What happened on that Blake Bortles pick-six?

In the middle of the third quarter, with the Jaguars down just 10-9, Blake Bortles threw a pick-six. What happened in the six seconds between the snap and interception?

Share All sharing options for: What happened on that Blake Bortles pick-six?

Jacksonville Jaguars quarterback Blake Bortles threw his fair share of interceptions last year, most of which were the results of bad reads, staring down receivers, errant passes, or some combination of these factors.

And on Sunday, it happened yet again at the least opportune time. Not that there's a good time to throw an interception, much less one that gets returned for a touchdown. But there are less bad times than when you're only down 10-9 against a lackluster opponent in the Carolina Panthers.

What happened on the play that led to the pick-six and how could it have been avoided? 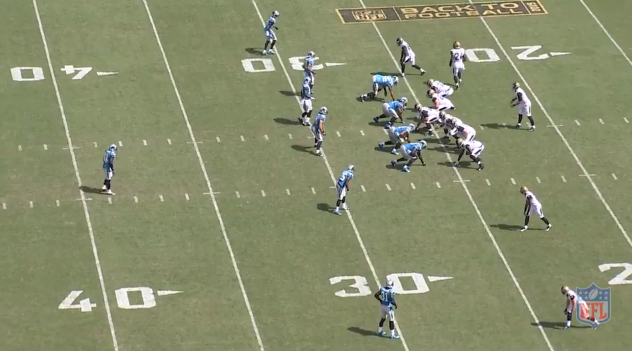 The Jaguars designed this play to have Yeldon motion out to the right sideline pre-snap. It looks like this ball was going to Yeldon all along, but for the life of me I can't understand the reward of even getting this play right. It's 1st-and-20, the intended receiver is three yards past the line of scrimmage, and he'll either go out of bounds or quickly get taken out of bounds.

Either way, Yeldon is motioned pre-snap. That gets the Panthers' attention. They shift their defense left, causing defensive back Kurt Coleman (No. 20) to move over and cover wide receiver Allen Hurns (No. 88) at the line. Harper (No. 41) shifts left too to provide backup to Coleman. 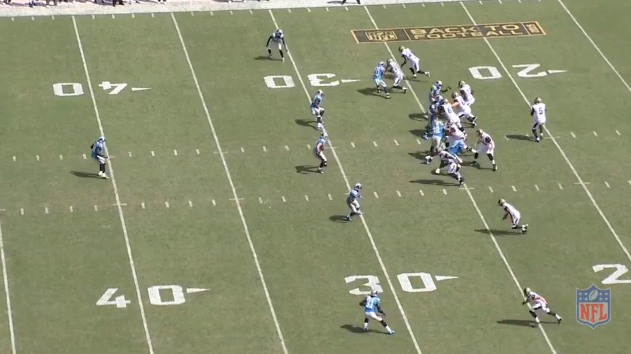 Coleman jams Hurns at the line and Harper is providing a safety net on the near side of the field. That allows cornerback Josh Norman (No. 24) to sit and watch Yeldon, as well as Bortles. 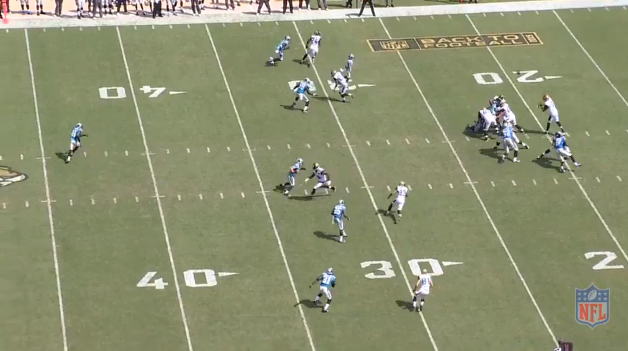 Fortunately for Norman, Bortles stares down Yeldon. Norman sits back in coverage and sits on the route, waiting for when Bortles makes his move.

It looks like the Jaguars were counting on Hurns to pull the defenders deep and Bortles was looking for some rhythm. Neither happened. 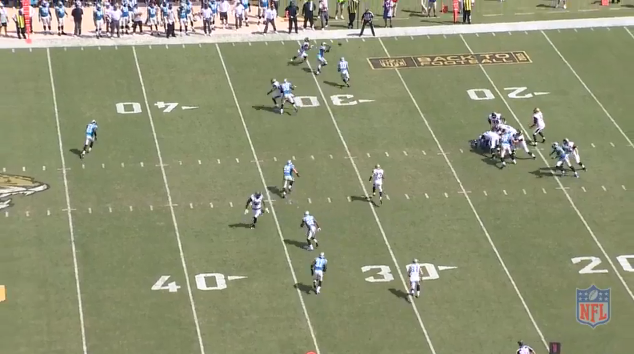 Three Panthers defenders in the area. Two Jaguars wide receivers. It's an easy pick for Norman, who takes it to the house for six points. The game never gets this close again.

Painfully, Rashad Greene is open over the middle. It would have only been a few yards and likely a punt two plays later, but at least it's not a pick-six.

The play in full

Bortles clearly stares down Yeldon and telegraphs the throw easily to Norman. It's a simple interception for the Panthers and a mistake Bortles made several times last year.

I don't know what Bortles was thinking the coverage was on this play. Maybe he thought Norman would be giving Yeldon more room? Maybe he thought the Panthers secondary would get pulled downfield? We'll see later in the week when he's (inevitably) asked about it. Until then, we just have to hope Bortles learned from his mistake on Sunday.

Jaguars vs. Panthers: Everything you need to know for Week 1