9 things Gus Bradley could do and not get fired

Gus Bradley cannot be fired. He is un-fireable.

Share All sharing options for: 9 things Gus Bradley could do and not get fired

The Jacksonville Jaguars aren’t firing head coach Gus Bradley. Nothing Bradley is doing can get him fired. It’s like that episode of Seinfeld where George Costanza wanted to go out in a blaze of glory so he could work with the Mets all to be told at the end of the episode that he was a passionate, hard-working employee who always had a place at Yankee Stadium.

If losing to your two most recent predecessors in Jack Del Rio and Mike Mularkey or making Tom Savage look like a Pro Bowler can't get you fired, what else can Gus Bradley do this year and not find himself jobless?

9. Pretend to kick Myles Jack in the knee

But then he stops short and keeps asking, "Can you imagine?"

This might actually help the franchise, so I don’t know if this should count.

7. Run over Shad Khan’s cat with his car

If Shad can turn a blind eye as his billion-dollar investment takes a nosedive, he can certainly overlook the fact that Gus just ran over Mittens. On purpose. Twice. (Probably.)

I mean, if you close your eyes, would you really be able to tell the difference between Trump and Bradley?

Okay, this was rude.

4. Tell everyone the plot twist to The Usual Suspects

This would be the first time anyone is surprised by the things coming out of Gus Bradley's mouth.

3. Microwave fish in the EverBank microwave

You heard me, you coward Shad Khan.

2. Have Jar-Jar Binks as his favorite Star Wars character 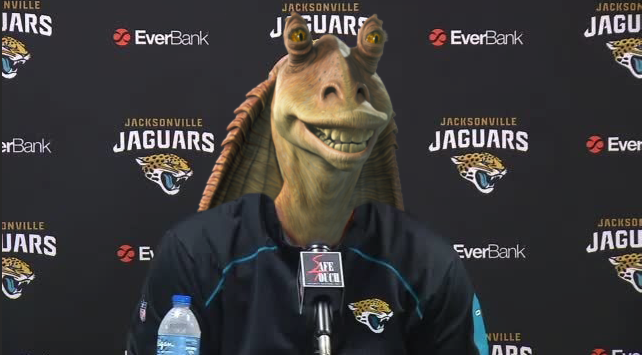 Jaguars vs. Chiefs: The beginning of the end