Now that we're a full week into NFL free agency and the two major waves of signings have come and gone, we can finally take a step back and look at what the Jaguars have actually added to their roster. Today, we're going to take a look at the defensive side of the ball because that's been the side addressed the most and the side most hotly discussed. The team added potentially three starters in free agency and a fourth if you count Dante Fowler Jr.'s return from his ACL injury.

Here's what it looks like now, and note I didn't include every player and this isn't necessarily a depth chart. New likely starters are labeled in green: 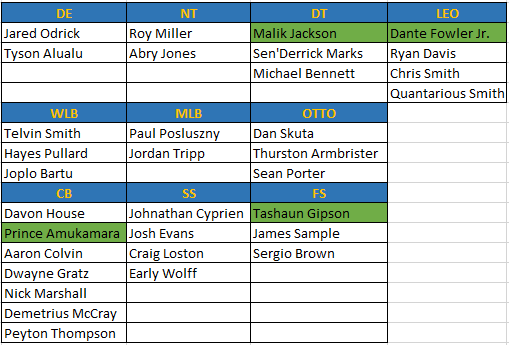 As you can see, for the most part the Jaguars defense headed into 2016 doesn't look drastically different than what was trotted out for the 2015 season. The team was pretty good rushing the passer from the interior, with a healthy Sen'Derrick Marks, and that area was further bolstered with the signing of Malik Jackson.

The LEO position gets Dante Fowler, but they lose Chris Clemons and Andre Branch. This means, depending on the draft and rest of free agency, that Ryan Davis is likely to get a lot more snaps at the position, but I'm not sure how much that helps. Through his time with the Jaguars, he's shown himself to be much more of an interior pass rusher than an edge rusher. A guy to play close attention to in this position is Quanterus Smith, who's name I hilariously misspelled in my chart. He was a guy I was a big, big fan of prior to the 2013 NFL Draft, but he tore his ACL towards the end of his senior season and ended up being picked in the fifth-round by the Denver Broncos. It took him a while to recover from his injury and the Broncos were loaded at his position, but he found his way to the Jaguars practice squad last season. If you want a "diamond in the rough", he's got the potential for that.

In the back end, the biggest addition of potentially all of free agency is Tashaun Gipson. Gipson was a legit playmaker for the Cleveland Browns for about a season and a half before he got derailed by injury. If he can return to that form with his injuries behind him, the Jaguars made a significant upgrade at the FS position. The other big addition was Prince Amukamara on a one-year prove it deal. He's been good when healthy, so it will be interesting to see how that shakes out.