Tashaun Gipson: 'I hope the fans in Duval share the same enthusiasm as I do'

Tashaun Gipson has all the potential in the world to be a star for the Jaguars for years to come. And after conducting an interview with the man himself, I believe he is a strong building block for the future of this franchise.

Share All sharing options for: Tashaun Gipson: 'I hope the fans in Duval share the same enthusiasm as I do'

The Jacksonville Jaguars made a handful of moves during the 2016 free agency period, and none were more intriguing (and necessary, in my opinion) than the signing of former Cleveland Browns free safety Tashaun Gipson.

Signed to be the "franchise free safety" Gipson comes to Jacksonville as head coach Gus Bradley's new prized possession -- the hole in the secondary that has been left void for Bradley's three seasons in Jacksonville has finally been filled.

A reason for us all to be hyped that Gipson has filled the void at free safety? He has recorded 14 interceptions in four seasons. Can you guess how many interceptions the Jaguars have recorded from the free safety position over Bradley's three years as head coach?

One -- one interception by a Jaguars free safety since Gus Bradley took over as head coach, by Sherrod Martin in 2014, according to ESPN.

Here enters nerdy, wanna-be math genius Zach -- Tashaun Gipson has quattuordecuple (yes, this is the actual Latin word for 14 times) the interceptions that the Jaguars mix of free safeties have had combined since 2013, and that's with only one extra season, as 2012 was Gipson's rookie season. 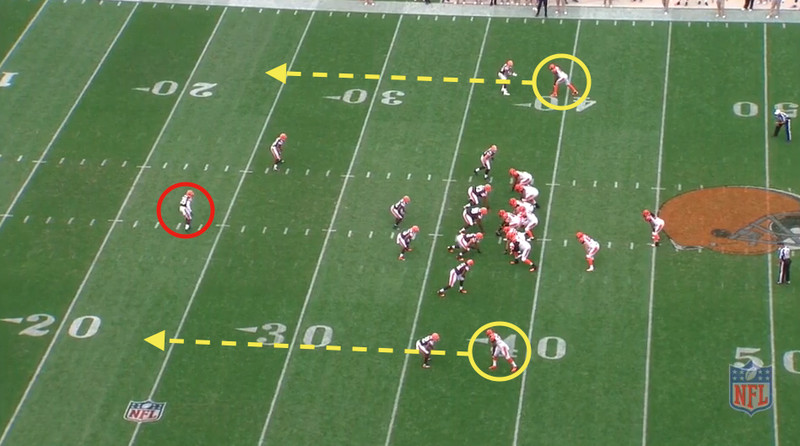 Over time, Tashaun Gipson worked to establish himself as a leader of the Browns defense. What can he accomplish at free safety in Jacksonville?

After the free agency period finally came to a rest, I had a chance to hold an interview with Tashaun Gipson, and he is just the man we heard and saw during his introductory press conference -- poised, yet humble; enthusiastic, yet cool, calm, and collected; a leader and respectful man who brings so much more than just talent on the football field to Jacksonville.

Big Cat Country: What made Jacksonville so attractive during the free agency period, from both a football and a lifestyle perspective?

Tashaun Gipson: Jacksonville was on a lot of guys' [free agents] radar and when you look back you can see why -- it's a wonderful, beautiful city, and everyone wants to come to Florida. I did my homework and I see where this organization is going with Mr. Caldwell. It's a first class organization that's on the turnaround. I believe the Jaguars are over the hump when it comes to the team rebuild, and I'm excited to be on board.

BCC: You signed a five year, $36 million contract to dress in black and teal on Sundays'. Did any other team's offer you that kind of contract? If so, what made Jacksonville the better option?

Gipson: We had talked to Philadelphia [Eagles], Pittsburgh [Steelers], Tennessee [Titans], and San Diego [Chargers] throughout the process, and all of the [contract] numbers became very similar and that's when I asked myself, "Where do I want to call home for the next four or five years?" And when it came down to it, Jacksonville made me feel the most wanted.

It wasn't even all about the dollar signs because we had opportunities to go with other teams and I'd become a very rich young man, but Jacksonville just felt right. They made me feel needed and wanted, like the recruiting process all over again -- making me want to bring that swagger here.

BCC: In 2012, you went undrafted and signed a deal as an undrafted free agent with Cleveland. Four years later, you're one of the highest paid safeties in the league, you have a Pro Bowl on your resume, and have even been selected by your former Browns' teammates as one of the top 100 players in the NFL. How surreal is all of this to you, considering you went undrafted?

Gipson: I will say this is all really surreal, looking back on my journey of making it to the NFL, it was just one of those deals where I never would have been able to imagine and been able to fathom this in my mind. It's not that I have ever doubted myself or my skill set, but I just know the reality of going from being an undrafted guy and let alone go to a Pro Bowl and being named one of the top 100 in just three years after going undrafted.

It's all very surreal and I even tell everybody it's an uphill battle and I personally don't think I've even played my best football yet, so I'm excited to see this thing go next season.

BCC: Do you believe that you fit the mold for the team's "franchise free safety" as head coach Gus Bradley and general manager Dave Caldwell label it?

One of the things I pride myself in is that I am a see-ball, get-ball football player, and if I get the ball, I'm gonna catch it, and that's what Coach Bradley wants from me. You know, he said that the team isn't going to ask me to do anything that is not Tashaun Gipson, and I just feel that this is the place for me, that I fit the mold.

BCC: What do you bring to the Jaguars from a leadership perspective?

Gipson: A lot of people say, "Man, you came from Cleveland, you know, winning wasn't part of the culture" but I've been around a bunch of great leaders. D'Qwell Jackson took me under his wing in Cleveland and guys like him and Karlos Dansby and Donte Whitner are born leaders and have helped me along in my NFL journey who have developed me into a leader as well. I've learned as an undrafted player that nothing is handed to me and I have to work for what I've got and I'll bring that mentality to the Jaguars locker room.

BCC: Throughout your years in Cleveland, you had times where you were limited by injuries. Would you consider yourself to be fully recovered from what appeared to be nagging injuries?

Gipson: Absolutely, I think if you look back at it my MCL injury in 2014 wasn't fully healed until I got to training camp and when I started to practice I had a small hamstring problem and a high ankle sprain. However, I think I'm well rested and I know I'm fully recovered, cleared to practice and I have a full offseason of training ahead of me for the first time and I feel really, really good.

BCC: At what age did you find football to be your passion?

Gipson: I would say, which is crazy, is that I discovered football to be my passion in my junior year of high school because my father sat me down and told me I need to choose one sport to focus on -- basketball or football, and that's when I realized how much football meant to me. Football was already embedded in me, I started playing when I was six years old,  but it took that drive from that talk with my dad to realize that my passion is football.

BCC: Who were your football role models growing up? Do you shape the way you play the game of football after any player who roamed the field before you?

Gipson: I truly admire two guys from the NFL, I grew up watching Ed Reed and the way he attacked the ball and I have so much respect for his game, and another current player is Jarius Byrd, the Saints safety, he's a turnover machine and you've just got to respect his game.

However, the guy who I shape my game after the most is my older brother Marcell Gipson, we played college football together -- he started at one corner[back] and I started the other. I always wanted to play the game like he did, and I always thought, "Man if I could be better than him than I know I'll make it." I just always looked up to him.

BCC: Now that you are in Jacksonville, are you happy you live this close to the beach?

Gipson: Man, before this offseason I had never even been to the beach. I finally went after I signed with Jacksonville, you know, they had me stay at a nice hotel on the beach and I told myself, "I could get used to this." I don't want the people in Cleveland to hate me but I told myself after I signed how great it is to not have to play in 20 degree weather and snow. It'll be nice to play in Jacksonville in December, in the winter, and know that it'll still be 72 degrees outside.

BCC: Although your job as an NFL player is huge, being a father is always a priority. What is it like raising two kids, Nala and Tashaun Jr., on such a busy schedule by playing football?

Gipson: Those kids keep me going, they're truly my motivation and nothing can contest to how much of a blessing they are. I had my son in my senior year of college and it just put a lot of things in perspective for me as a man and I know I need to provide them the best life possible.

I try to be the best role model and to lead by example for them, even when I have a bad day or bad game, I know God blessed me with those kids and they get me through it all, I love them to death.

BCC: Numerous sports writers, websites, NFL experts, etc... are calling the Jaguars "a team to watch for in 2016" and "a team that's on the rise". How does it feel to be in an environment where the nation is starting to set high expectations?

Gipson: I think that this recognition is well overdue. On paper, this team looks amazing and that's going to put a lot of pressure on this team. We have all of the parts, we have key guys at key positions, plus guys coming back from injuries in Dante Fowler Jr. and Sen'Derrick Marks, we've had a great offseason in free agency, as well as the draft ahead of us, we can pull in even more talent through the draft.

We have a stellar offense, we're building a great defense and I relish this feeling and excitement. How could you not? I want people to know we're coming -- the Jacksonville Jaguars are serious this year.

BCC: Last question: Based off of this team's emergence as a top offense in the NFL, combined with the additions made to the defense and the leadership of the team, are you setting any expectations for how far the Jaguars should go this season?

I'm not gonna say, "I want to win 10 games this year." I can't control that. But I do want to play meaningful games down the stretch near the end of the season, because that means we've done our jobs to secure games in January. My expectations are soaring through the roof and I hope the fans in Duval share the same enthusiasm as I do.

Read more about how Tashaun Gipson fits into the Jaguars' defensive scheme here.