Jacksonville Jaguars camp is well underway and we will soon be cutting our roster down.

To help with roster predictions (and to pass some time), I figured I'd take a look at the numbers of players at each position we tend to keep on the final roster and take a stab at guessing who makes those final cuts. But in a totally rubbish attempt, as is my way.

In order to get an idea of any trends in positional group numbers I looked at the archived rosters using a beginning, middle, and end of season data point (10/1, 11/1, and 12/1 respectively) using OurLads.com. Yeah, that is basically it. 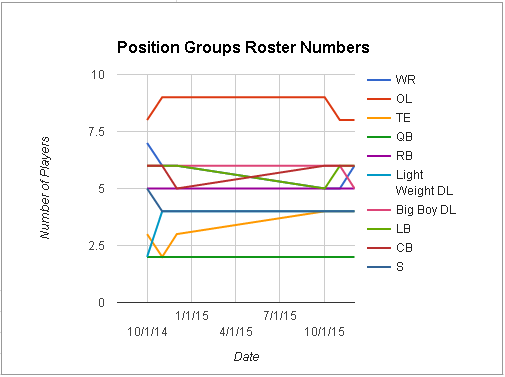 I'll be the first to admit that these graphics aren't entirely correct, as the position numbers naturally increase when our roster limits do the same. But since we are looking at the numbers of players in each position group on the final 53, they should be good enough for our purposes.

Google Sheets also really likes using vaguely different colors for separate data, so here are some averages which might help in determining which position is which.

And for those confused as to what a "Big Boy" D-Linemen is, it is a catch-all term because I'm not going to try to jump through hoops trying to make 300+ pound defensive ends sound vastly different than 300+ pound tackles because of Bradley's nomenclature (especially when some of those ends can play tackle, and some of those tackles can play end). And of course rounding the numbers because we need as many of our players intact as possible (Marqise Lee, Arrelious Benn, and Julius Thomas come to mind.)

What does it mean?

Something that stands out when looking at the data is just how often we have stuck to a six linebackers, six cornerbacks, and six defensive tackles formula on defense (perhaps that is why we have played like hell these past few years) and that those are some of the easiest to know positions in terms of how many players we most likely plan to keep.

Likewise we have started to consistently keep four safeties and four LEOs recently, after running a formula of 2 Leos (yeah, I don't know why either) and 5 safeties earlier on.

While most fans are probably more comfortable with our offense more so than our defense heading into the season, it is actually this side of the ball that produces some of the noisiest data. While we have been pretty consistent about keeping five running backs/fullbacks we have seemingly wrestled with just how many tight ends vs. offensive linemen we want to carry, and wide receiver has seen swings between four and seven players kept. (#OffensiveWeapon.)

Who should we keep?

There has been some talk of the Jaguars keeping three quarterbacks, but this team is in win now mode and it is hard to justify that Allen is a must keep in order to accomplish that goal.

With two running backs capable of being passable lead backs on the roster, it seems unnecessary for us to carry extra for the sake of doing so. Ivory should take over early down work with Yeldon being his breather back and our primary third down back, Gray offers some injury insurance and Denard is likely to star as a core member of the special teams.

Probably going to be one of my more criticized predictions, but bear with me. Imagine that instead of trying to decide if Walters, Greene, or Lee was your best option at slot receiver you got to pick Hurns. And I'm sure this thought experiment is already ruffling some feathers, but I'm ok with that. I'm not saying that we should only ever play Hurns in the slot, just that when we require a slot receiver that we allow ourselves to put our best combination of players on the field. In my mind that means Benn at the 1, Robinson at the 2, and Hurns in the slot when we go with three receivers.

Yeah, I'm leaving off both Nic Jacobs and Neal Sterling. Lewis is long in the tooth, and while we should be grooming his eventual replacement, we also need to field the team most capable of winning now. Koyack and Bowman already have a jump on playing as tight ends over Neal where as Jacobs has had maybe 10 receptions total since 2012. I feel these four best offer us the advantage of both being weapons and providing some blocking from the tight end position as opposed to backups who can only do one or the other.

I'll freely admit, this is the position group I'm most likely to get wrong, and consequently the team needs to get right. Judging from what I can see of offensive drills the team has been using Bernadeau as a center (was supposed to be our left guard) and Omameh as a right tackle (listed at right guard) and makes them likely swing candidates. The real battle is probably going to be between Shatley and Reed if the team decides to only carry nine, and in that scenario I'd give Shatley the edge as I don't want to imagine Wells starting at right tackle.

We recently have kept four LEOs, but these are our options as true LEOs with further depth likely to be carried in the form of "LOTTOS" which is nothing more than a LEO/OTTO linebacker hybrid.

Davis has more experience playing as a Leo than he has had being an Otto and feel like the nature pick to be depth for both positions (his experience on STs is an added bonus as well).

Once again I'll highlight the depth player of a position. A lot of fans are excited about what Jack can mean for our defense, but honestly he offers some excitement from a roster numbers perspective as well. Like Davis, Jack not only bolsters the middle linebacker position, but he gives us more virtual depth at weakside linebacker as well. (Woe to a lot of our 2015 waiver claims.)

I know it looks like there is competition in the form of Thurston Armbrister, and that would probably be the case if the team didn't draft Myles Jack. Armbrister doesn't seem like a player who is going to win LEO snaps over Ryan Davis and where would we put him when Jack becomes the starter at Mike sometime this season? Tripp is the only player I can see being Jack's back up at Mike, Telvin's backup at Will and still offering the size from a linebacker teams have looked for in their OTTOs. Now all this could go to shit if the team doesn't keep 10 linemen, but Tripp gets the nod purely for being Russell Allen 2.0.

You know who he is, so I'm going to use this space to point out that we have already filled the four LEOs / six linebackers roster average using only nine players while also giving ourselves three-player virtual depth for our three main linebacker positions.

Our deepest position group is going to likely see our cuts picked up on the waiver wire, and that always makes you feel better about the state of your roster -- unless you are losing games and those cuts are doing better than the people you picked over them, but this is a new year! Day is currently the man of the hour, but his spot is the one most likely up for grabs in my scenario. All players listed can at least play 3-tech at a league average level, half have played the big end role before in the NFL (and Day played some in college), 1-tech might have the least depth but it probably should be used the least. And as a bonus, Alualu's ability to play as a novelty fullback makes carrying four running backs not seem as bad.

Cyprien is in the last year of his contract and has yet to prove himself to be a viable starter at safety for us, and the excuses will have to end at some point. Whether you agree or disagree with that sentiment, we are in good shape to see him out the door as we have three strong safeties on this roster and that isn't including Ramsey's knack for playing tight ends well in man coverage. Depth is good.

I've left Colvin off purely because of his suspension, though I wouldn't be surprised if he didn't have a job to come back too. Similarly to how I explained my choice of receivers and how we attempted to use Colvin last season I think the team should make Ramsey our primary nickel cornerback with Prince becoming the outside corner, even though Ramsey will probably be called upon to be our No. 2 cornerback as well in base looks. Marshall has had some good looks in camp, could be emergency free safety depth, and could possibly be our designated kick returner. After all, he averaged 26 yards per return last season. McCray has experience on special teams coverage units, was a Caldwell pick, and has the height/weight/speed that generally always finds a way to make a roster. The No. 6 cornerback of this group should be added depth at nickel, and Calhoun could possibly be a guy who fits that role (and allows the fanbase to rejoice in the release of Gratz).

As always, thank you for your time and feel free to agree or disagree or start "fights" down below.