There has been some back and forth about just what Leonard Fournette will or won't produce in 2017. So I decided to take a stab at some estimations.

Initially my only assumption is that Leonard Fournette will perform (on a per rush basis) like the averages of several first round runningbacks.

Here is what we are working with (approximately). 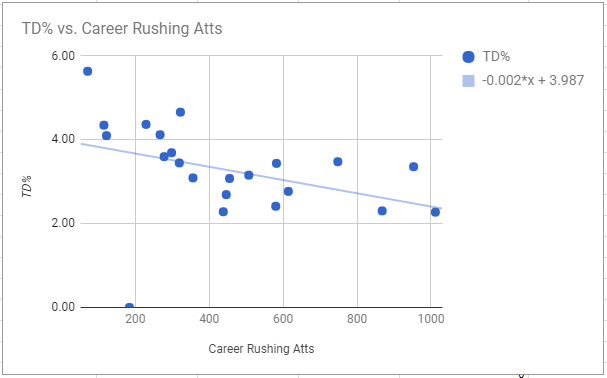 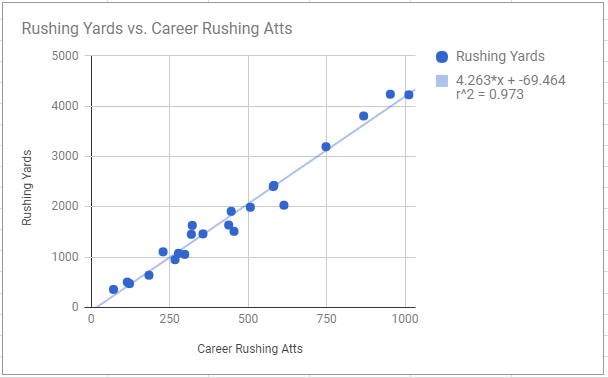 And then comes the tricky part, estimating just how many snaps we can expect Leonard Fournette to see as a rusher will greatly influence his end of season totals. So I decided to look at a variety of possible outcomes and see how we can expect Fournette's numbers to look like based on those snaps and the presumption that he isn't a below average back.

To be honest, I think the Jaguars are practically locked into a 6 win season, and teams playing from behind often abandon the run because even bad Qbs score more TDs and average more yards than great RBs. So I plotted the number of rushing attempts versus win totals of teams during the 2016 season to get an of how losing might affect a teams likelihood of rushing the ball. Couple this with the roughly 36% lead back usage during Marrone and Hackett's time in Buffalo and the low watermark for Fournette is going to be estimated at 172 rushes.

To get an idea of a medium usage case I took the averages of first round running backs over the past few years minus the unusually low first year usage of David Wilson and Mark Ingram. This number is 264 rushing attempts and is probably one of the more likely scenarios.

To give a high water mark for expectations I settled on 285 rushes as it is somewhere North of the 1st round rookie RB's average usage while still being a reasonable amount of snaps for a lead back in today's NFL.

And with many people expecting to be our team's Elliot, why not project Leonard Fournette's production based on such an unusually high usage?

And here is how the outlook looks for these given rush attempts given that Fournette is just like the average 1st round runningback.