A Slice Of Humble Pie: Jaguars vs. Colts Part One

In order to curb sky-high middling expectations following Jacksonville Jaguars wins, we here at Big Cat Country will do our best to serve readers a slice of humble pie following wins.

Share All sharing options for: A Slice Of Humble Pie: Jaguars vs. Colts Part One

After a stunning win in Indianapolis, Jaguars fans are exceedingly positive on the prospects of a decent season for the Jaguars. Immediately following the game, Cole Pepper and Marco Coleman fielded calls from happy Jags fan instead of fans calling the Jaguars a tire fire and other alarmist drivel. For once, only every other caller asked for the head of Gene Smith! If that isn't progress, I'm not sure what is. However, wearers of the teal and black must remain level-headed going into the next week or face the cruel mistress that is karma and eat a heaping serving of humble pie.

PORTENTS OF PAIN
As noted earlier, the Jaguars had deficiencies in several areas and won despite those deficiencies. If you had stopped watching at the half, you would have expected the Jaguars to have lost. However, despite a bumbling pass rush that failed to record a single sack, an offensive line that needed Marcedes Lewis to reinforce itself, and a seemingly stuttering pass attack, the Jaguars won in a fashion that fans are accustomed to: by pulling out random plays that come from nowhere. Getting past the fact that the team managed to win in fantastic fashion, the overall feeling one receives when looking back on the performances of certain Jaguars units is not positive and does not bode well considering the opposition.

HARBINGERS OF HELL
Despite being a ginger, Andy Dalton has thrown with great poise and accuracy in his last twostarts, throwing for over 300 yards against both Cleveland and Washington. With A.J. Green, who has been targeted 35 times this season, the Cincinnati Bengals offense is dynamic, sputtering at times, but scoring nevertheless. Against a struggling Redskins defense, the 'Red Rocket'[/eyeroll] managed a 70.4% completion rating with 12.5 yards per completion. Against a similarly inept Jaguars defense, Dalton may have ample time to throw the ball and beat the ailing Jaguars secondary. While the Bengals defense does seem just as inept as the Jaguars, the Jaguars offense has seemed to play down to the level of opposing defenses, sputtering towards first downs with the panache of a mortally-wounded animal.

HUMBLE DIE PIE
While it is hard to say that the offense is a strength of the Jaguars, it certainly is not the liability that the defense is. Assuming that the pass rush of the last few weeks will not improve, the Jaguars will have difficulties stopping the air attack of the ginger. Forcing an aged Rashean Mathis to make play after play is as much a recipe for disaster as placing a nuclear power plant next to the ocean. Ignoring the obvious on the defense, one must also be concerned about the offense, mainly the offensive line. While at least either Eben Britton or Cameron Bradfield are slated to return this week, Guy Whimper will still be in the rotation, much to the chagrin of those who love the game of football. On another note, you know things are horribly wrong if the Associated Press reporter dragooned into covering the Jaguars calls Guy Whimper 'Guy Whiffer'.

It is difficult to say how the Jaguars will fare against the Bengals because both teams are equally difficult to gauge. In fact, they are eerily similar in terms of defensive ineptitude, but the Bengals arguably have an edge in the passing offense with their second-year starter. As such, the numbers gurus in Las Vegas have listed Cincinatti as three point favorites in most sports books, though you may be able to buy in at Cincinnati -1 if you are lucky. In order for the Jaguars to eke out a win, the defense will have to step up and finish plays, reaching the quarterback before he throws the ball. This is called a ‘sack', just in case fans forgot what this means. If the Jaguars can't reach the ginger Dalton, they will be forced into an offensive shoot-out that they have shown thus far that they cannot win.
Remember Jags fans; despite the win at Indianapolis, don't get big-headed. 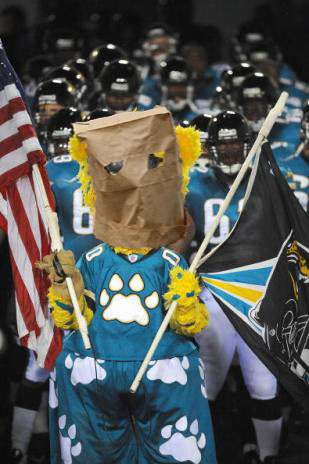