The Jaguars offense in the first half against the Detroit Lions was abysmal. Let's go to the coaches film to find out what exactly happened.

I'm going to try something new with "Film Room", more so than breaking down specific plays using gifs (which I still plan to do) I'm going to do a running commentary for the game while I watch it on All-22. I typically do this on Twitter, but I decided I would just do it as a post this time to try it out. For this test run, I'm going to focus on just the offense. If you guys like it, I'll roll with one post for offense, one for defense.

Any way, here it goes.

1st and 10, JAGS 13: Jaguars line up with 2 WR, 2 TE split out with Rashad Jennings as the single back. Zach Potter goes in motion and Jennings runs right off center. Lions linebacker Justin Durant works through the trash to cuts in to take out Jennings legs, stopping him for just a two-yard gain.

2nd and 8, JAGS 15: Jaguars line up with 3 WR, Justin Blackmon in the slot and Marcedes Lewis on the line of scrimmage next to Eugene Monroe with Rashad Jennings as the single back. Off the snap, the Lions left defensive end bull rushes Cameron Bradfield into the backfield into Gabbert, forcing Gabbert to dump the ball off to Jennings for a 4-yard gain. Had Bradfield not been immediately pushed into the pocket, Marcedes Lewis is coming wide open over the middle. It may have been possible for Gabbert to step back and hit this throw to Lewis or hit Shorts on the slant, but nothing wrong with checking down here. On the slant route, Gabbert would have to deal with the Lions linebacker flashing through the throwing lane. 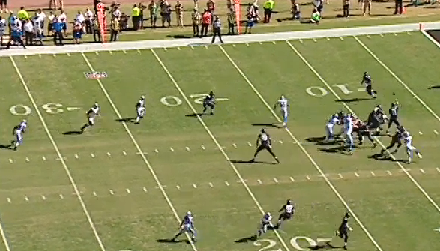 3rd and 4, JAGS 19: The Jaguars lineup in shotgun with with Jennings as the single back. Cecil Shorts is lined up outside with Laurent Robinson and Justin Blackmon stacked on the other side, Lewis flexed on Gabbert's right side. The play is a simple 3-step drop and throw to Blackmon running an out route. Gabbert throws to the spot where Blackmon should be as he's making his break, but Blackmon is slow getting out of the break and the ball is just out of reach. This was a case of the receiver looking like he's in quick sand making his cut and not getting to his spot on a timing pattern.

1st and 10, JAGS 37: Jaguars line up with two tight ends, fullback, Rashad Jennings in the backfield, and one receiver outside. It's an obvious running play with Jennings taking the handoff to go to the right off center. Either Cameron Bradfield over commits and misses the block on Justin Durant or Lewis can't get to him, allowing him to fill the running lane and forcing Jennings to try to bounce it outside, resulting in a 3-yard gain. 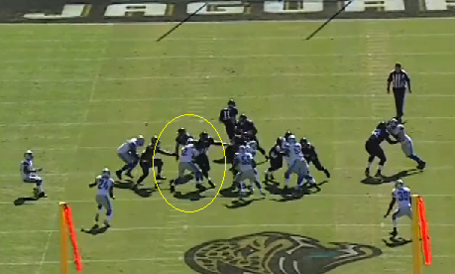 2nd and 7, JAGS 40: Jaguars lineup with two wide receivers, fullback, Jennings in the backfield, and Marcedes Lewis on the line on the left side. Blackmon motions across to the left side of the formation pre-snap to run a flat route while Gabbert executes a play fake and rolls back to his left. Gabbert hits Blackmon with the ball for a short gain as he catches it backing up and goes out of bounds. A simple easy play to pick up decent yardage and possibly more if the corner covering Shorts stays with him down the field. Looks like a designed play the whole way.

3rd and 4, JAGS 43: Jaguars line up with three wide receivers in the shotgun with Jennings in the backfield next to Gabbert. Justin Blackmon comes in motion from left to right pre-snap giving the Jaguars trips on the right side. Bradfield is beat around the corner by the Lions defensive end forcing Gabbert up in the pocket and looking to get of the football, but all his receivers are covered and he takes a sack trying to run for the first down. 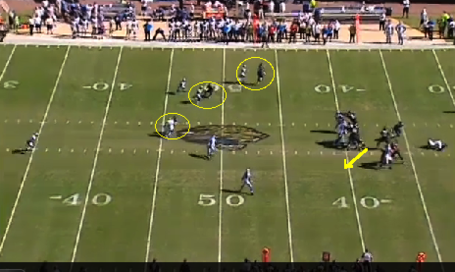 1st and 10, JAGS 18: Jaguars lineup in the off-set I formation with two receivers and a tight end on the right side. Blackmon motions to the right side pre-snap. Gabbert executes the play fake after taking the snap and turns back around looking to pass the ball to Lewis, who's open running the corner route for a big gain. Shorts is also coming open on the right side on a longer developing crossing route, but Lions defensive end Lawrence Jackson leaps over Jennings attempted cut-block and ruins the entire play. Jackson eliminates Gabbert's throwing lane and picks up the sack. Gabbert's outlet on the play, Blackmon running a flat route, is covered up by the Lions llnebacker as well, so there's really no where to go. 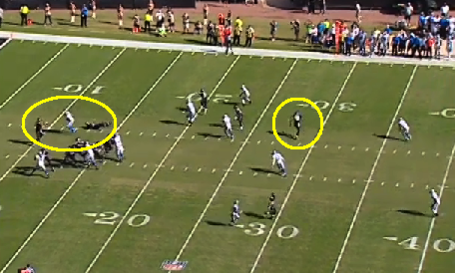 2nd and 15, JAGS 13: Jaguars lineup in the shotgun with four wide receivers and Lewis lined up in-line on the left side. The play call is a tight end screen to Lewis, who bobbles the football trying to run with it before he secures it. Gabbert places the ball on the outside so Lewis can catch it and turn upfield fluidly, but it's ultimately dropped.

3rd and 15, JAGS 13: Jaguars lineup in the shotgun with a single back, three wide receivers, and Lewis flexed on the right side. Gabbert throws the ball to Blackmon on the corner route but he bobbles the football out of bounds and it's incomplete. Gabbert once again throws the ball to the outside so the receiver can catch it and turn up field, which would have resulted in at least a first down, but Blackmon can't haul it in. 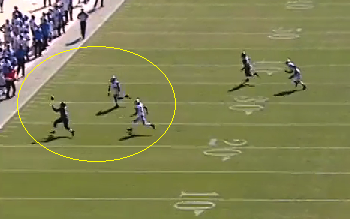 1st and 10, JAGS 21: Jaguars lineup with two tight ends, fullback, and Jennings in the backfield with Shorts lined up as the lone wide receiver. Lewis comes in motion from right to left on the play and off the snap Gabbert executes a play-fake. The Lions get pressure from the outside with their defensive ends forcing Gabbert up in the pocket. Gabbert takes the checkdown to Jennings for a 3-yard gain, and in my opinion making his first poor read of the game. Gabbert had Lewis wide open on a post-corner route for a big chunk of yardage, but for whatever reason went for the check down. I don't know if Gabbert didn't think he had the time to step into the throw since he was forced up in the pocket, but he had Lewis wide open. 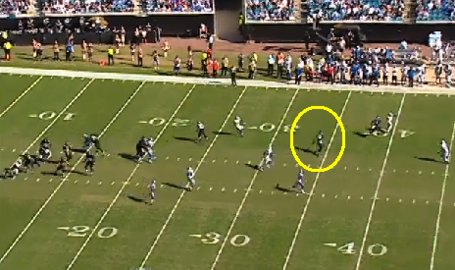 2nd and 7, JAGS 24: Jaguars line up in the I-formation with two receivers and Lewis on the right side off the line of scrimmage, motioning from the right to the left before the snap. Lewis seals off the defensive end (this is the play Lageman highlighted on "Jaguars All Access") and Jennings takes the hand off for an easy 8-yard gaine and the first down.

1st and 10, JAGS 32: Jaguars line up in a single back set with two receivers stacked on the right side and one receiver on the left side, with Lewis with his hand on the ground on the left side. It's a simple hand off to Jennings up the gut for an easy 5-yard gain.

2nd and 5, JAGS 37: Jaguars line up in a single back set with receivers on each side, Lewis flexed to the right and the fullback lined up as a tight end on the left side. The fullback goes in quick motion and misses his seal block on the right side of the play, killing the handoff before it gets started netting in just a 2-yard gain.

3rd and 3, JAGS 39: Jaguars line up in the shotgun with three wide receivers and Lewis flexed out to the left side and Jennings in the backfield. Cecil Shorts comes in motion from the left to the right side, giving the Jaguars trips on the right side. This is the second mistake from Gabbert, as he never comes off Jennings on the play despite having an open receiver for the easy first down in the middle of the field. I'm sure Gabbert was thinking pre-snap given the formation he could hit the quick dump route for the easy first down but the Lions defensive back sniffs it out from the start because Gabbert stares it down the whole way. If Gabbert begins the play simply looking at the middle of the field then comes quickly to that throw, it's likely a first down. Gabbert had the right idea, but didn't execute it properly. He needed to sell the middle of the field to hold the defensive back. 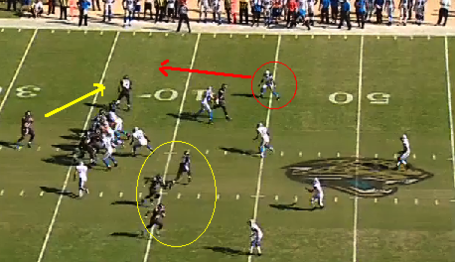 That was the final drive for the Jaguars in the first half as the entered halftime down 21-0. After just reviewing the first half, it simple comes down to execution of the plays called. There are little mistakes in each facet of the offense that throws a wrench into the gears. You have lack of pass protection on some plays, you have a bad read on another, and a drop on another.

In my opinion, there wasn't really anything wrong with the plays that were called. There were chances to pick up yardage and continue drives if the players can just execute the little things, be it not getting blown off the snap by a defensive end or simply catching the football before you try to turn upfield.

As I keep stressing; It's not one thing, it's everything.