Jacksonville Jaguars first-round pick Justin Blackmon has struggled to follow up his quick start in the preseason during the NFL regular season, so what's the problem?

So far on the season, Jacksonville Jaguars first-round pick Justin Blackmon has just four receptions for 31 yards, but has been targeted 15 times, making him the second most targeted receiver on the team. Jaguars head coach Mike Mularkey noted that Blackmon is beginning to get frustrated with his lack of production, but what's causing his lack of production?

Is it something Justin Blackmon is doing? Is it something within the scheme? Or is it simply quarterback Blaine Gabbert isn't getting him the football?

Let's take a look at the coaches film from Sunday's 22-17 win over the Indianapolis Colts, a game where Blackmon had just one reception but was targeted seven times.

The first play we're going to look at, Blackmon lines up in the slot, behind Mike Thomas off the line of scrimmage. Blackmon runs a crossing route over the middle of the field. The player who got the reception on the play, Maurice Jones-Drew comes from the backfield and is crossing in the other direction.

You can see Gabbert turn to look to throw to Blackmon, but opts to hit Jones-Drew over the middle with a lot of green in front of him. The play resulted in a short gain, but had Gabbert thrown to Blackmon on the play it's likely a contested catch, with the defender hitting Blackmon as the ball got there or a gain for about the same amount of yards. This was just a play of throwing to the receiver with the best chance for yardage gain on the play, which was Jones-Drew. Mike Thomas misses a block on the defender after the reception, else it may have been possible for more yardage.

The next play we're going to look at is from an endzone look, to highlight why the play ultimately failed. As you can see, Blackmon is lined up in a "trips" set on the line of scrimmage. He runs a deep post route avoiding the initial jam and splitting the defenders. Gabbert sees the throwing lane opening up and waits the split second for the linebacker to carry Mike Thomas across the middle, goes to throw and the ball is slapped out of his hands by outside linebacker Robert Mathis for a strip/sack.

As you can see on the play, Mathis blows right tackle Guy Whimper off the snap and bends under Whimper's attempt to get his hands on him, shooting around the edge to slap the ball away as Gabbert goes to throw. Had Whimper even slowed Mathis down and Gabbert makes the throw, it's at the least a big gain putting you right on the goal line and possibly a touchdown outright. The end result of the drive was a field goal, so that potentially left four points on the field because of poor pass protection. 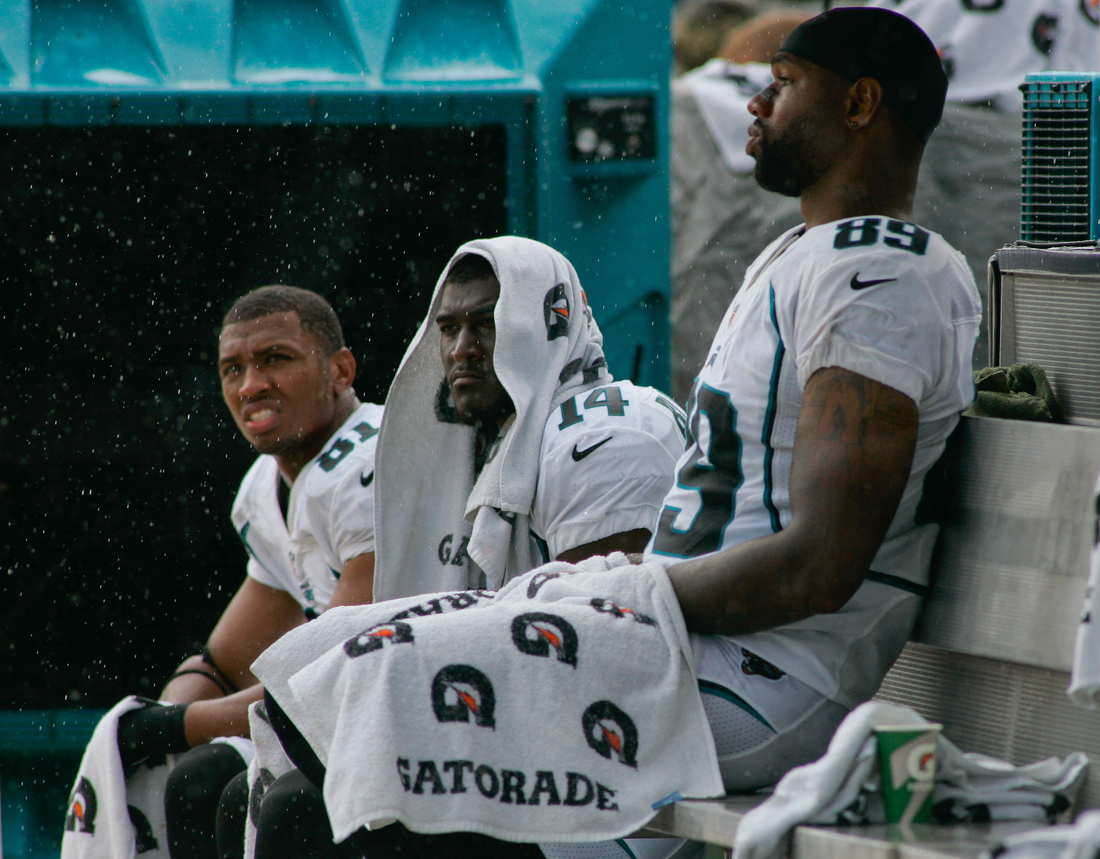 The next play we have is a simple play designed to pick up quick yards. It's a two receiver set, with both receivers lined up wide. Blackmon is at the bottom of the screen and off the snap runs a hard slant to the inside. With the corner playing off coverage this should be an easy five yard gain, possibly more. Gabbert snaps the ball, turns and fires to Blackmon who drops the ball. Pre-snap, Gabbert knows the option on the play is to Blackmon, because the top corner is closer on the line to the top receiver, so Blackmon has room to force the inside position.

Blackmon may have been thinking about running before he caught the football or alligator arming in because of the impending shot he would take, but he just flat out drops the pass. Had he caught the ball, his momentum alone on the play likely would have netted the Jaguars a quick, easy first down.

The final play we're going to look at is another missed long gain possibility because of poor pass protection. It's basically the same missed touchdown we reviewed before, but flipped to the other side. Blackmon is once again in a "trips" set with Blackmon on the line of scrimmage.

Once again, Blackmon gets a free release into the middle of the field and is in a big hole in the zone because the inside linebacker once again rides Mike Thomas across the field. This frees up the throwing lane the linebacker typically is sitting in, in the zone. The problem on the play once again comes from the pass protection. Colts defensive tackle Drake Nevis blows right through the offensive line. Nevis splits Brad Meester and Uche Nwaneri, but I can't quite determine who's fault it is on the pressure, however pressure from the interior of the pocket will typically kill most passing plays.

Gabbert's trying to give the play time to develop but is forced to just rush the throw before Nevis hits him, resulting in an incomplete pass.

So, as we can see Blackmon's lack of production is basically caused by the same reason's the whole offense has lacked production. Small breakdowns in certain areas that have a ripple effect on the entire play.